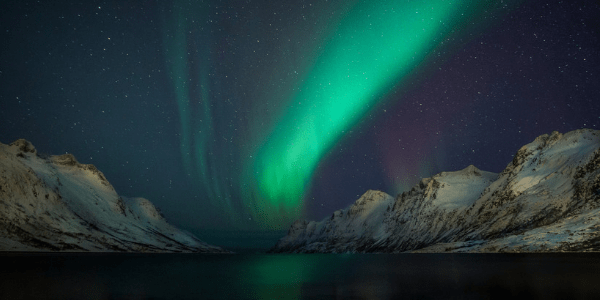 The world of Finnish mythology is filled with wonder and enchantment. This is a story of Loviatar, the Finnish goddess of shamanism, witchcraft, and the sacred feminine.

The name Loviatar comes from the word lovi, an old Finnish word for “doorway” or “vagina,” referring to the entrance that shamans went through when they travelled to the spirit world. (The modern Finnish expression langeta loveen refers to shamans falling into this trance state.) Loviatar was a protector of women and magick, and was summoned to protect the mother when they were giving birth and when someone passed away. The people who first worshipped Loviatar believed in reincarnation, and she was the goddess of birth, death, and the transition between them.

In Finnish folk magick, there is the concept of väki, which means the invisible power within things. Naisenväki or vitunväki was the power of women, which was considered especially powerful. However, the role of noita (witch) was gender neutral, and anyone could work as a witch, shaman, or healer.

Goddess of the moon and stars

In the first stories told about Loviatar, she was the goddess of the moon. In the oldest layer of Finno-Ugric myths, the ruler of the underworld was a male deity shaped like a waterbird. (These ancient stories come from totemic times.) But as the culture became more patriarchal, Loviatar became the goddess of the underworld and the ruler of death.

In northern Finland, there was a belief that the spirits of the dead lived in the stars and northern lights, and naturally Loviatar, being the goddess of the moon, was connected to them. Later on, the idea of underworld being a physical place underground replaced it. 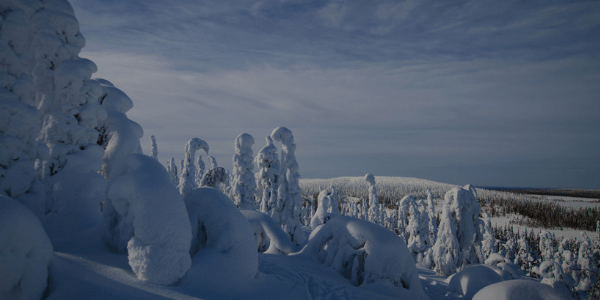 The Finnish underworld, Pohjola, derived from the words pohjoinen (north) and pohja (bottom), was described as a snow desert, a place similar to Lapland in the heart of winter. That is where coldness, evil spirits, and spirits of the dead lived, always waiting. For mortals, Pohjola was a dangerous place, but for a hero it could offer all kinds of possibilities.

When Finnish folk beliefs were influenced by other cultures, and later on Christianity, the underworld became the place of all misery and torture. Loviatar was demonized and became a representation of Christian devil. She was turned into an old hag who gave birth to all the evil things of this world: Sicknesses, pain, and death.

In Finnish folk poems, Loviatar is often connected to Louhi, the mythical witch of the north, and it is possible that these two characters are in fact the same goddess. Depending on the story, Loviatar is sometimes Louhi´s mother or vice versa, or Louhi acts as Loviatar´s midwife when she is giving birth.

In the poems that come from the late Iron Age, Loviatar was one of the three sisters who ruled the underworld. The youngest sister was known as Kivutar, the pain girl who ground peoples’ pains in a mortar made of stone. Loviatar was the middle sister and she ruled physical pains and disease. The oldest sister was known as Vammatar, who ruled psychic pains and mental illness.

In this story, Loviatar became impregnated by the wind. She looked for a safe place to give birth but no one would let her in. So, she lay herself on a stone and gave birth all alone, to nine boys known as the Nine Diseases. They were Pistos (chest pain), Ähky (horse colic), Luuvalo (recurring pain in limbs), Paise (abscess), Rupi (eschar), Rutto (plague), Riisi (rickets), and Syöjä (cancer). The ninth child was a blind, nameless embryo, usually thought to be witchcraft that was practised in order to harm others. In ancient Finland, all these diseases were well-known and there were spells and chants that were used to heal them.

In the Kalevala, an epic poem about Finnish mythology written by Elias Lönnrot in 1848, Loviatar, here called Louhi, is the evil witch of the north, and she and the people of Pohjola fight against the people of Kaleva. Lönnrot´s Louhi is a matriarchal ruler of the north, portrayed as an ugly old hag who is always fighting against the wizard Väinämöinen, the hero of Kaleva. Louhi becomes the representation of fading Pagan beliefs, while Väinämöinen welcomes the new faith.

Poems from this period also depict Loviatar/Louhi as the mother of wolves and snakes. Wolves were feared animals in agricultural societies.

In the 19th century, the Lutheran church in Finland started paying hunters to kill wolves, for to them the wolf was a living representation of Satan. (Perhaps because of their association with Loviatar.) 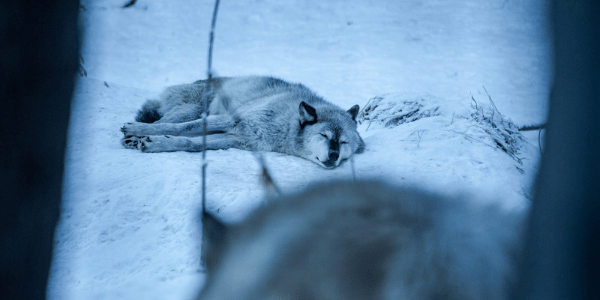 Loviatar was connected to the winter solstice, and her sacred day was 22 December. In some parts of Finland, there was a custom to sacrifice a sheep to the wolves in her name on that day. Her colours are white, silver, and blue, and her symbols are the moon, stars, and snowflakes. In addition to wolves, other animals sacred to her are snakes, lizards, frogs, and dragons.

When she is in the form of Loviatar, she comes as a beautiful white-haired maiden and in the form of Louhi, she becomes an old lady. She is often connected to the Crone aspect of the Triple Goddess.

Loviatar has similarities to other goddesses of witchcraft, such as Hekate from ancient Greece, Baba Yaga from Slavic folktales, and Ragana from the Baltic lands. Some of her stories have been influenced by Norse myths, and the Iron Age symbolism of Loviatar (bones and skulls) has similarities to the goddess Hel.

Loviatar as a teacher

For me, Loviatar represents independence. Unlike other goddesses in Finnish folk tales, Loviatar does not have a male counterpart. This can be explained with her shamanic roots; it was not unheard of for shamans and witches to live in solitude or in celibacy. Like her sacred animal, the wolf, Loviatar is a goddess who seeks freedom and howls to the moon. She is the goddess of seekers, fortune-telling, hidden knowledge, and wisdom.

Loviatar is probably the most misunderstood deity within all of Finnish mythology. Like many goddesses of witchcraft, she was a victim of patriarchy, depicted as evil and given attributes that she originally did not have, but she is neither good or evil. Loviatar is like cold winter nature itself: it can be ugly and harsh or kind and beautiful, depending how you have prepared yourself for it.

Loviatar is the goddess of deep hidden wisdom and self-knowledge. For me, Loviatar represents the power of women and motherhood. She was one of the goddesses who helped me to mother myself and she taught me confidence. Loviatar was feared, and that is why she was nearly destroyed, but she is powerful, strong, and ancient like the frozen land far north.