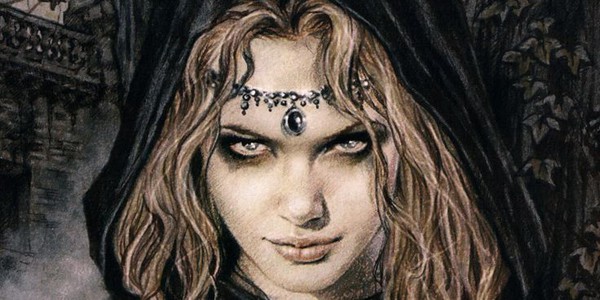 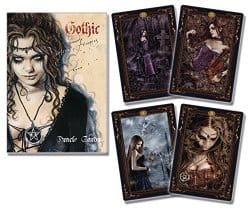 The Victoria Frances Gothic Oracle is a 36 card deck featuring the Gothic artwork of Victoria Frances, an accomplished illustrator. Each card is illustrated in full colour in Frances’ distinctive style, and as such, the entire deck is very dark and very feminine.

This deck speaks to the classic Gothic aesthetic. The colours are dark and brooding, everyone’s skin is pale and washed out, their clothes are Victorian-esque, and there are quite a few vampires to be found throughout the cards.

The art is very well done. I have seen Frances’ work before, so I knew what to expect; the cards are very typical of her style. One thing that really sticks out in this deck is that the cards feature far more women than men. In fact, there is only one card that displays a male alone. The only other times men are featured is alongside a woman and even then, the woman is the main point of focus. In both instances where a man appears with a woman, they are masked.

Suffice to say, this is a dark deck, but its readings aren’t all gloom and doom. In order to really understand this oracle, one must have an understanding of the Gothic aesthetic, and a comfort level with the idea of using shadows to find the light, which is what this deck aims to do. Although at first glance the cards would seem to be about sadness and fear, they are actually meant to acknowledge those emotions so the reader can focus on what’s on the other side of them and attempt to move past them.

Even so, this deck is not a greatly intuitive one. All of the cards are very similar in nature. For the most part, they all feature women in Gothic garb against a fairly undefined backdrop. You can tell that they’re underwater, in a forest, or in a tomb, but this deck lacks a lot of subtle details that make reading intuitively possible. Instead, it focuses on the images of the figures.

You can glean some understanding of the cards from these figures. I did some readings without looking at the book to see how close I was to the artist’s interpretations, and although I was in the ballpark, there are many layers that are not apparent on the card itself.

For example, I drew the 3 card, The Mirror in the Candlelight. From the way the figure held her own body, I could see right away that this was a card about loving yourself, or self-confidence. Because it has a much lighter colour scheme than the rest of the deck, I also read that it would be about “shining brightly.” However, that reading was only part of the card’s full meaning: it also dealt with fear, protection from harm, and working through difficult times. None of that was apparent to me just from the illustration alone.

The Victoria Frances Gothic Oracle probably works best when the reader learns each card’s meaning beforehand because, unlike in more nuanced decks, it lacks the subtle details that convey meaning. The only subtleties you have to read from is the slight movements of the character’s bodies. That said, it is important to note that although each card has its own meaning, there is a lot of overlap in between them.

Many cards are about fear and having confidence in yourself. There is also a repeated focus on moving forward and the practice of psychic ability. Because of this overlap, multiple card readings are more difficult, as you can pull a series of cards that all say much the same thing.

I did a one card draw and the five card spread to test the cards. The single card draw was much stronger, as it pulled the focus towards one aspect of my question rather than attempting to sort through many layers of an issue. The five card read was not as clear because, despite each position representing a different issue, the cards had so much overlap in meaning that the problem, the solution, and the outcome were all more or less the same thing.

The Victoria Frances Gothic Oracle may be a good choice for people who are interested in exploring the dark feminine. However, a beginner reading from these cards would likely become frustrated, especially if it is their only deck, and they are attempting to awaken or strengthen one’s own psychic abilities. If you are a beginning reader and you are interested in an oracle deck with this aesthetic, I would recommend the Oracle of Shadows and Light, by Lucy Cavendish. It has the same dark feel but with more variation, making it easier to read and work with.

I would also recommend these cards to be used more for single card draws and meditation purposes rather than full readings. If you like the Gothic look, then this can be a nice addition to a deck collection, but as a main deck it lacks the sophistication to be used for many types of readings. Still, it does offer a way to look into the darker sides of our nature, which can be very useful for some practices.

The Victoria Frances Gothic Oracle is a tough deck to crack but if you’re a confident reader, it may be worth the exploration.