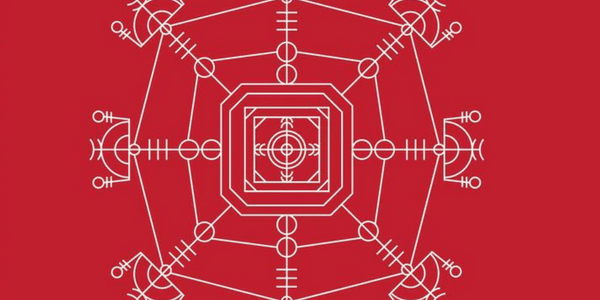 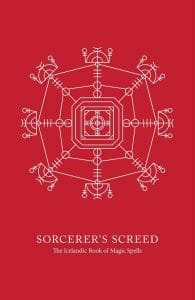 All praise to the Icelandic Magic Company, for bringing this absolute gem of a book out of the shadows of subcultural obscurity and into wider availability. Sorcerer’s Screed The Icelandic Book of Magic Spells is highly unusual and tremendously entertaining, the product of the fevered polymathic brain of Skuggi (Shadow), who rejoiced in the given name of Jochum magnus Eggertsson. Skuggi tells us that he studied, among other things, rock collecting and cheese making, and actively pursued his own theory regarding the existence of an obscure Celtic tribe who roamed Iceland with a camel convoy. Readers take note: Sorcerer’s Screed is a journey into the mind and magical research of a prolific but wildly off-centre polymath. And what a journey this is!

First mention must be given to the sheer beauty of the book itself, which is a visual and tactile pleasure. The pages have an almost linen feel to them, and the book is filled to overflowing with beautiful renderings of various diagrams and runic inscriptions. The vast majority of these are done in red ink, which brought me back to an almost Tolkienesque sense of delight, imagining Frodo Baggins perusing his uncle’s works. I know how crudely hyperbolic I must sound, and I hope readers will forgive me for it, but in a world of ebooks and PDFs, this libellus stands apart as an example of the still-present virtues of physical printing.

Sorcerer’s Screed begins with eight sets of what the author refers to as “speech-rune Kennings,” which include, for example, a rune for “m” that looks like a capital “E” at a 45 degree angle. This rune is entitled boknams-byrlir, which translates to “scholarly cupbearer.” I am at a loss to tell you precisely what this means, or what significance this may have overall, but I can tell you with great confidence that I look forward tremendously to attempting to find out. Now, imagine more than 200 of these, which encompass the first 20 pages, on scrupulously labelled tables, and you will have some sense of the treat you are in for — not to mention ember-runes, claw letters, magic letters, and Icelandic head letters. I have no idea which of these are the product of scholarly research and which are the products of Skuggi’s fertile and fecund mind, nor does this particularly concern me.

The majority of the book, slightly less than 150 pages, is comprised of Nordic spells — their staves all carefully diagrammed and instructional runes carefully translated. Some of them are quite well known, such as the aegishjalmur and the Lasatafur (“helm of awe” and “unlocking stave,” respectively). Some I have encountered before in other works, such as the nabrokarstafur (“corpse’s breeches stave” — you really don’t want to know). Some I had never heard of before, of which my personal favourite was the hringhjalmur or “tide-mouse stave.” The instructions for how to catch a tide-mouse are worth repeating:

First, one takes hair from an unspoiled maiden and from it weaves a net with meshes so small that the mouse can be caught in it. This net is to be laid where one knows there is money to be found on the bottom of the sea, because tide-mice cannot be found anywhere other than where there is gold and silver.1

These two sentences are as good a pair of instructions as are to be found in the English language. If, by the way, anyone who reads this happens to actually know what a tide-mouse is, please leave that information in a comment. Until then, I will be delighted to leave this to my imagination.

Not surprisingly, the spells of the Sorcerer’s Screed are deeply infused with Christian influences. Many of the staves are variations on the Rotas Cross and some make reference to harnessing the power of the Rod of Aaron or the Staff of Moses. However, some of the spells are deeply subversive of Christian practice, perhaps none more so than the smjorhnutr, or “butter knot stave.” This spell goes into great detail on the making of a “tilberi”, which by inference is some sort of magical famulus or servant. The manner in which a tilberi was made carried significant risk of discovery and punitive action:

Following this preparation, she must go thrice to Communion, and at each sip of the wine that she takes, let some of the wine wet the material for the tilberi (she may even do this with both the bread and wine) by spitting it into her bosom and into the mouth of the tilberi…The prescribed punishment for a woman discovered with a tilberi in her possession was to be burned with the tilberi on her, or drowned; such an evil, ungodly practice this was considered to be.2

Clearly, not an act to be undertaken by the faint of heart. Just as clearly, Skuggi’s spell acknowledged the power of Christian sacrality, even as he attempts to use it for his own magical purposes. To me, this is reminiscent of the medieval “crime” of feeding a sacralized communion wafer to a sick cow — an act that simultaneously recognizes the power of the wafer, even while attempting to use it in a non-sanctioned way.

All told, the joy of Sorcerer’s Screed really is in what you make of it. If you are looking for a grimoire that gives specific instructions for all sorts of useful spells, here it is. If you are looking for an autodidact polymath’s subversive gathering of outlandish behaviours, lo and behold. And if you just want a beautifully designed book filled with esoteric scribings that look really cool, well, look no further.