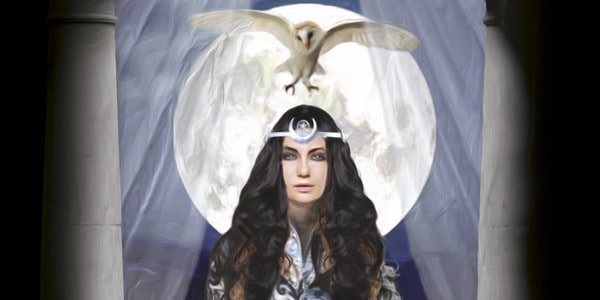 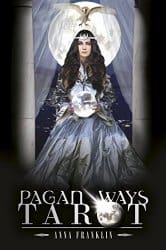 The Pagan Ways Tarot was created by Anna Franklin, a Pagan priestess who also created the Sacred Circle Tarot and Fairy Ring Oracle.1 At first glance, the Pagan Ways Tart appears to be a standard variation on the Rider-Waite-Smith deck; however, it has much more to offer Pagan readers, and novice readers especially.

The deck comes in a ribbon hinged box with a lovely 190 page full colour manual. In addition to describing the deck and imagery, each card is presented with upright and reversed meanings. The cards are excellent quality, if a little oversized for readers accustomed to playing card sized decks or standard Rider-Waite-Smith decks. The cards have a black background, and the guidebook and box are also dark gray or black in colour. This might not be to everyone’s taste, but I liked the dark look overall.

The artwork is digital photographic. The guidebook indicates that the individuals in the photos represent gods and goddesses. The depictions all appear to be white people, and are lacking in ethnic diversity. However, the specific gods and goddesses are not identified, perhaps in order to invite the reader to make their own meaningful associations with the deities. The digital photography and image composition is packed with Pagan imagery to consider, although the effect appears a little cut and paste. It’s unfortunate, since the card quality is so good and the deck is so thoughtful in incorporating Pagan images. Some of the cards within the suit of Swords feature sky, air, and wind imagery, but some do not. The design of the cards otherwise makes excellent use of symbolism, but further incorporation of the elements might have been a nice addition.

The deck aligns each suit with its associated element, and also with the energetic quality of the suit. So we have Swords (air) aligned with “intent;” Wands (fire) with “will;” Cups (water) with “love;” and Pentacles (earth) with “manifestation.” The Rider-Waite-Smith deck recalls the elemental and energetic associations of the suits, and learning these took time, but made card readings flow better. In the Pagan Ways Tarot, having the associations embedded in the cards is very helpful; again, especially for beginning readers or anyone who likes the prompt and finds that helpful. Each suit is also expressly correlated to a season — spring, summer, autumn and winter. The deck is especially well suited to Pagans who might be learning tarot, as it makes the elemental connections throughout each suit.

Each card within the minor arcana features a word which describes the card’s meaning succinctly. In this way it prompts the reader about the card’s meaning. For instance, the Nine of Cups, features a goddess with a bounty before her, and is labelled “Abundance;” and the Two of Swords features with a god and goddess gazing at one another over their crossed swords, is titled “Stalemate.” This can be very helpful and also leave the interpretation more open to context and the unique perspective of each reader (especially novices who might typically reach for the guidebook for meanings). Having the descriptive prompt will encourage readers to use more intuition and less rote memorization in card meaning.

The perspective of the cards is very Pagan — the Princess (rather than Page) and Queen of each suit represent the eight festivals of the year. Princesses represent the opening of the seasons (Imbolc, Beltane, Lughnasadh, and Samhain); and Queens the zenith of the season (Ostara, Midsummer, Herfest, and Yule). Other Pagan-appropriate adjustments replace the Empress and Emperor with the Lady and Lord; the Hierophant with the Elder, and the World with Wyrd. Death is represented by an image of the Crone which is a lovely integration of Pagan imagery into traditional tarot.

The guidebook also has a wonderful appendix describing the symbolic imagery used in the cards. There are well over a hundred entries in the appendix: from A for altar, which says “The presence of the Gods, communion with the Gods” to yellow, described as “Intellectual development, strength of mind.” This makes meditating with the cards richer since the symbolic meanings are close at hand.

The back of the guidebook includes spreads for divination, meditation and spiritual development. I tried multiple Celtic Cross spreads, a few simple past present and future, and also meditated on a card daily for a week. Though I didn’t love the artistic style of the cards, I found the cards very intuitive and very easy to make connections as the imagery is clear and each card has its one word descriptor on it (Four of Pentacles: Control). Again, for a new reader this is invaluable.

The care and attention to integrating Pagan imagery is excellent. This deck will be very helpful to anyone on a Pagan path, and particularly so for those starting on the path who would like to integrate tarot into their Pagan knowledge. For me, it’s an excellent regrounding in the natural symbolism of Paganism applied to my knowledge of tarot. The union of the two traditions feels appropriate and makes the cards new favourites for me. It also feels like a feminist deck with its incorporation of Princesses and Queens representing the cycle of the year, or the addition of the crone image on the death card. The Pagan Ways Tarot is a wonderful and rich source of knowledge for the Pagan tarot reader.