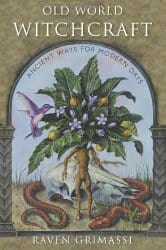 Raven Grimassi is a name familiar to those of us who have been reading books on Wicca and witchcraft for a number of years as to date he has authored 14 of them. His background is varied and extensive, running the gamut from Rosicrucian studies and kabbalah and various forms of “traditional” witchcraft. This background allows him to approach the subject from a variety of perspectives.

In Old World Witchcraft Grimassi is presenting his take on the argument that witchcraft is a survival of an ancient pre-Christian religion. One thing I am sure of is that this book has the potential to polarize the community because of Grimassi’s emphasis on the Goddess as the primary deity of early witches, with the God perceived as an invisible presence. This is not the only sacred cow he goes after, although I must emphasize that this is not a malicious attack, but merely an attempt to show how the Christian concept of witches and witchcraft coloured the perceptions of everyone — including both medieval and modern-day witches.

I may not always agree with Grimassi’s positions, but I have to respect his ability to communicate them clearly and distinctly. You always know where he stands on an issue. This book is a shining example of how to present ideas which are likely to be unpopular in some groups without being so offensive as to shut down all possibility of a dialogue developing. It is clear from the outset that Grimassi is aware that he may be stepping on a few toes along the way, but through his careful statements of fact, and offerings of opinions (with a this distinction always made clear) he manages to make his points without appearing as a threat to anyone’s point-of-view. This is an extremely fine line, and one which is often impossible to walk.

The last half of the book is composed of a grimoire for The Ash, Birch, and Willow magical system. Note that this is a system not a “tradition.” No claims are made for the ancientness of the rituals and terms. It is, admittedly, a cobbled together system, drawn from numerous sources, spread over the breadth of Europe, and encompassing centuries of hints; and that’s all we have to work with — hints. There are no surviving ritual books or records written by actual magick workers and witches of these times. All we have are the records of trials, with evidence obtained through torture and twisted to fit the preconceptions of the individuals conducting the “examinations.”

I can absolutely guarantee that there will be heard any number of exclamations of dismay from various quarters, ranging from “That’s not how we do it!” to “Those aren’t proper tools.” Not to sound too dismissive, but my response is “Whatever.” Until you try working with this system it isn’t possible to judge the effectiveness of Grimassi’s proposals. I don’t have the same training the author does, but I see enough overlap with what I was taught early in my training that I can acknowledge the possibility — no, the likelihood — that what he suggests would be effective.

Another objection sure to be raised is with Grimassi’s assertion that “Old Way” witches did not adhere to the “harm none” philosophy which is considered definitive in Wicca today. Not only that, he acknowledges that they probably engaged in living sacrifice (as did the cultures which gave birth to them), and that they were capable of using their herbal knowledge to kill as well as cure. For many of the newer generation of Wiccans this is going to be highly offensive but, when I was trained more than 40 years ago, one of the first things my teachers imparted was that “You have to know how to kill to cure.” If you don’t know what dosage is lethal, you stand the very real possibility of poisoning your patient. That also means to you need to know how various potions and decoctions will affect the individual, so you need to experience it for yourself (much like law enforcement officers are required to be the target of a taser before they are allowed to use one on anyone else).

The final segment of this work consists of several “books” comprising a grimoire (Ways, Calls, and Magic). Each of these contain information which is derived from bits and pieces of European lore concerning tools and rituals (Ways), invocations (Calls), and techniques, symbols, sigils, and correspondences (Magic). While there is nothing too radical in any of these, the attitudes and perceptions may seem a bit odd to the average, non-traditionally trained witch of today.

The book is finished off with two short appendices, “The Invisible God of Witchcraft” and “The Five-Thorned Path,” and a short list of end-notes and a bibliography. “The Invisible God of Witchcraft” refers to the fact that there are no surviving references in classical sources to a god associated with witchcraft. There are goddesses in plenitude, but nary a mention of a male deity. Even in the literature associated with the Witch Hunts, except for references to “the Devil,” there is no mention of a male deity. Make of that what you will.

Grimassi’s explanation of the symbolism of five thorns emanating from a black pentagon, thus forming a pentagram, in two differing orientations offers a fertile field for meditation and exploration. I’m not sure where this may lead, but the journey itself may well be worthwhile.

If you are open to alternative approaches to the history of witchcraft, written by an individual who is not afraid of sacred cows but who, at the same time, is not out simply for shock value, this book is worth far more than the cover price.