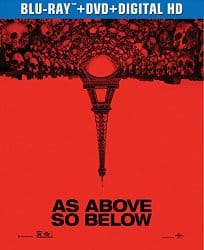 Scarlett, the main character, is an artifact hunter, à la Indiana Jones, driven by her pursuit for the elusive philosopher’s stone. She is looking for the physical stone of alchemical myth that grants immortal life and magical powers, and it is clear from the outset that the threat of death means nothing to her.

To appreciate As Above So Below, you may need to issue a few forgiveness tokens.

For a start, this is a found footage film. Scarlett begins recording the journey on her own and later recruits a friend to act as videographer capturing her quest. Cameras hang on, keep ticking (even surviving rocks!), and recording without losing much in the way of continuity.

Secondly, a group of young adults go into the wilderness alone and end up dying. It’s a lynchpin of horror. If you think too heavily on it, it’ll spoil the deaths to come.

Scarlett travels into forbidden Iranian territory, navigating tunnels with demolition warning sirens all around her, and I appreciate a devil-may-care bravado in someone whose entire focus in life is a single goal. Clues found in Iran lead her to Paris in search of the tomb of Nicolas Flamel, another big name in alchemical history. She recruits a ragtag bunch to go down into the Parisian catacombs and embarks on an adventure more often set in North African and Middle Eastern lands.

Once the point of the adventure is established and the group assembled, the movie sets off in typical horror movie fashion. Wrong turns, blocked exits, and general weirdness help to establish the horrific tone. Deaths happen later in this movie than expected, but once they start, it begins a domino effect.

Beneath the genre trappings, beyond the buried treasure adventure run, is the deepest layer of all: the esoteric journey. The philosopher’s stone is similar to a sorcerer’s holy grail. The quest to find it, the events that unfold within this movie, is a front seat to the main character’s magnum opus. Scarlett changes where the others resist; she gives in to the experience rather than trying to make it go away.

I’m not sure how someone who is not familiar with magical journeys, spiritual awakenings, or the magnum opus would process the ending, but I suspect even the casual occultist would find satisfaction in how this one ends.

And now, for the spoilers…

Scarlett goes looking for the physical philosopher’s stone, and finds it! However, to get out of the hell they entered, she has to find the “real” stone and its magical power.

She uses the stone underground before crossing into the portal of the underworld — where everything is inverted: “As Below, So Above.” When she tries to use the stone, it does not work. Reasoning that there must be a stone on each side, she returns to retrieve the “other half.” She runs back through all the previous obstacles, fighting her way through the monsters they left behind. She reaches the wall and puts the stone back rather than removing another.

The nail couldn’t be any more on the head than when she wipes the dust from an orb and sees her own reflection, and realizes that the stone itself has no power: she does. The events that follow pay homage to the hermetic origin of the movie title: “As above, so below; as within, so without; as the universe, so the soul.”

The film concludes with Scarlett’s emergence from the dark, wholly changed, and having awakened the powers within. For me, that makes this movie worth all its flaws.