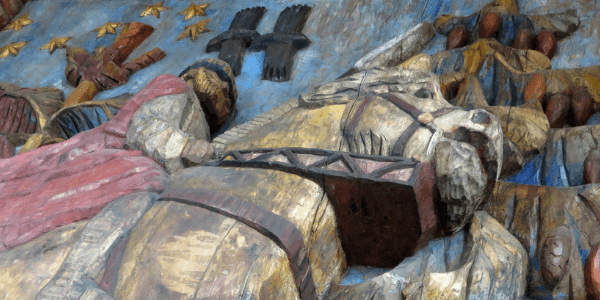 Odin: Ecstasy, Runes, & Norse Magic, courtesy of the grande dame of the Society for Creative Anachronism (not to mention author, priestess, teacher, and Very Important Pagan) Diana Paxson, is a wonderful text for anyone interested in a general introduction to a very complex Norse god. Although the book is intended for the generalist, it is very well sourced and is potentially interesting and even illuminating for readers at any level of study. Diana Paxson encourages this book to be used as a launch point for a deeper understanding of this mysterious figure:1

You can, of course, simply read this book straight through. But reading only speaks to a part of the psyche. To understand Odin in your heart and soul, you need to seek him in the world and to open the doors of your spirit through spiritual practise.

Odin is famously a god of many, many names and aspects, and Paxson works to break these aspects down into several major categories and to discuss how Odin may be approached and interacted with in each of these guises. Appropriately for Norse mythology, she examines Odin in nine manifestations: Wanderer, Magician, Tree Rider, All-Father, Desired One, Battle God, Bale-Worker, God of the Dead, and God of Ecstasy. Even at a glance, this is an ambitious list, but Paxson is thoughtful and thorough in her explanations.

As mentioned earlier, this work is not meant to be a scholarly exegesis; more than anything, it is a relationship guide. Paxson is very open about her own complicated relationship with Odin, and narrates several key events in her own life, both powerful and painful. She also includes stories from many of her correspondents about breakthroughs and illuminations they have experienced. The book is filled with poems, songs, meditations and illustrations offered up by many Pagans and Heathens. It also offers a cornucopia of rituals and music formulated by Paxson herself, some included throughout the work and some within the substantial appendices.

Although Paxson herself would be the last one to claim any kind of dictionary-definitive understanding of Odin, she does makes some fascinating speculations, particularly upon a question that has received heated disagreement: Can Odin be considered a shaman? Diana Paxson answers in the affirmative, and offers some persuasive arguments.2 She also considers links between Odin and gods of other pantheons, such as Apollo and Lugh.3 Her discussion of the relationship between Odin, runes, and rune-reading is extensive,4 as well as her examination of the connections between Odin and magick in general.5

Among the many things that make this book enjoyable is the fact that Paxson undertakes a “whole cloth” examination of Odin, and that includes the aspects in which the god is outright dangerous. There is a passage in the book which made me laugh, and no doubt others will recognize from their own experiences:6

From time to time, someone, usually a young man, will stand up and try to dedicate himself to Odin. The declaration is often greeted by a groan, followed by a challenge from the Thul. The trouble with an oath to die in the trenches for Odin is that he may just take you up on it.

I laughed because, of course, I recognized myself in this young man. As someone who has speculated on wearing an eye patch as a devotional exercise and how to “lightly stab” myself with a spear (yeah, let that one sink in), I know that following a path to Odin is filled with all sorts of hubristic temptations and dangers. I sometimes think that the Poetic Edda should come with a warning not to try these things at home. People have done stranger things in the midst of religious ecstasy, and Odin is a god of frenzy and madness.

In Odin: Ecstasy, Runes and Norse Magic, Diana Paxson is offering the reader a distillation of her research and evolving relationship with the highest of all the Norse deities, a product of decades of reading, rituals, meditations, and exploration. The result is a book which provides readers an opportunity to deepen their own understandings of this complex and nuanced figure. It is an opportunity worth taking.