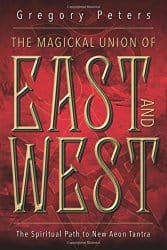 Gregory Peters was a student of Phyllis Seckler (Soror Meral), and New Aeon Tantra, a system which merges Aleister Crowley‘s Thelema with Buddhism and tantra, was developed for the Ordo Sunyata Vajra, an order Peters founded in 1999.

Though the practices Peters outlines in The Magickal Union of East and West rely on a Thelemic framework, he clearly states that they are not tied to Thelema, and may be used by other practitioners. That said, this is not an introductory text — a background in ceremonial magick is assumed, and even a passing familiarity with eastern systems would go a long way.

Many of the introductory practices follow a typical yogic regimen: hatha yoga, surya namascar, lunar adorations, as well as selecting a goddess to work with. (Though Peters doesn’t go into detail about how one should either choose a goddess, or find a goddess who would choose the practitioner; in place he offers a brief list of popular goddesses and their mantras.) Peters’ notes on dietary considerations are refreshingly forgiving, as they allow the practitioner to discover and use a dietary model that best suits their body’s needs, rather than proscribe constraints. Perhaps this is in light of the axiom from The Book of the Law, which states that the word of sin is restriction.

On the Thelemic side, rites are given for Thelemic Refuge, a method of protection and psychic armour, invoking Nuit and Hadit, along with a wonderfully lucid introduction to Thelema and its specialized terminology, such as the aeons, true will, and agape. Peters delves into Aleister Crowley’s influences and earlier models, such as Francois Rabelais and Saint Augustine of Hippo, and acknowledges that Thelema transcends Crowley, suggesting that “eventually something will come along to replace Thelema,” and notes that “gnosis is not static, not locked into a particular model from history.”1

In the meantime, Peters uses Liber al vel Legis as a central text, quoting liberally from it, and actually works to make sense of it, demonstrating how it fits into his philosophy of New Aeon Tantra, such as with the three root vows, which will already be familiar to any Thelemite: Do what thou wilt shall be the whole of the Law; Love is the law, love under will; and To Me.2

Peters’ description of the practical work involved in New Aeon Tantra is well grounded, and he links tantric tools with their ceremonial counterparts, though he does assume a working knowledge of kabbalah and Crowley’s Thoth Tarot. There are numerous rites and dedications: the Lantern of Thebes, a middle pillar rite; the Vajra Tower, a ritual of purification, consecration and connection to the higher self; the Midnight Sun, a rite of energization, invocation; and a myriad of others that serve to deepen one’s practice.

All of these practices serve as preparation leading towards the Diamond Sapphire Gem of Radiant Light, the central rite of New Aeon Tantra, and the primary outer rite of the Ordo Sunyata Vajra. This final rite is intended for groups, but can be modified for solitary use, and is deemed suitable for practitioners of any skill or experience, though those with some grounding in ritual practice will likely benefit more from it.

Although the Diamond Sapphire rite is informed by Thelema, unlike the Ordo Templi Orientis‘ Gnostic Mass, this rite has no set roles based on gender or sexual orientation. That said, it does assume a “male-female polarity,”3 which may be uncomfortable for some practitioners.

There are a few other cultural biases that jar, such as Peters’ description of zen as a “mutation” of ch’an,4 while Thelema is described as “an advanced synthesis and evolution of what came before it.”5 It may also be worth pointing out that, of course, Thelema is not actually “stripped of all non-essentials and cultural trappings,” as described. Rather it appropriates and “mutates” ancient Egyptian mythologies, among others, in building its pantheon.

Despite these caveats, Gregory Peters has done a remarkable job in synthesizing a new tantric model that’s easy to understand and work with, and The Magickal Union of East and West is a wonderful addition to the growing body of literature on Thelemic tantra. The essential reading list and list of further reading will be helpful to those wanting to learn more about the system and its roots.

Tao of Immortality, by Mantak Chia

Angels of the Zodiac, by Patricia Papps

The Witch, by Ronald Hutton