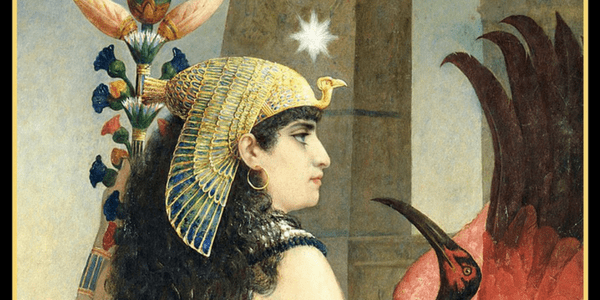 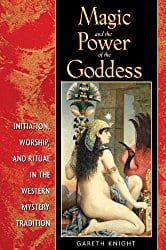 Gareth Knight is a prolific occult scholar whose body of work includes dozens of books and spans more than 50 years. Magic and the Power of the Goddess is his exploration of the goddess archetype as she appears in the Western Mystery Tradition and literature.

On the surface it looks poised to delve directly into my areas of interest. Goddess worship, and how it’s filtered through literature? Yes, please. I expected to come away from Magic and the Power of the Goddess having been introduced to some different faces of the Goddess, and with ideas about how to interact with them in worship and ritual. Unfortunately, sometimes expectations just aren’t borne out in reality.

The set up of the book is perhaps not as well considered as it could be. It is divided into two sections, and at the very beginning of part one, “The Magic Circle Maze Dance,” Knight wastes no time in laying out a working thesis, “Our current delusion is an over-valuation of the intellect.”1

For a book that wants to insist that contemporary western society’s major failing is intellectual egotism, Magic and the Power of the Goddess is certainly an intellectual book. Furthermore, its proposed solution to that problem: a return to recognizing the value of the feminine principle in order to live in harmony with the earth2 seems a difficult feat when every example of the goddess principle provided is confined largely to a literary source.

Indeed, the writing and tone in part one is challenging; I’d put it on par with some of the more difficult religious theory I read in university. When Knight’s voice is present, it often felt condescending towards the reader, like he was looking down his nose at me while deigning to offer instruction. Perhaps rightly so, since I frequently found myself rereading sentences or paragraphs a second or third time to be sure I understood what the text was trying to say. Though, needless to say, that’s not a very welcoming feeling. Part two, “Evocation of the Goddess and the Planetary Being,” which begins approximately 50 pages into the book, is considerably easier reading, which begs the question, why is the book structured this way? It’s not a friendly or accessible introduction, and I suspect many casual readers or readers new to the subject will not wait around until part two when the tone noticeably improves.

Part two begins by mapping out the five branches or goddess archetypes Knight intends to examine. His examples are pulled from classical mythology, then the western literary canon. Consequently, the later examples, including Dante’s Divine Comedy and The Chymical Marriage of Christian Rosencreutz lend a decidedly Christian undertone to these goddess encounters. Especially in the case of Christian Rosencreutz, the symbolism is by no means obscure. It’s right there on the tin: the main character is an allegorical self-insert for text’s contemporary readers.

Your mileage may vary on how useful these sorts of Christian goddess encounters are, based on your own practices and spiritual-leanings. But Christian Rosencreutz, Dante and other mythical figures who likewise appear — such as the Greek hero Perseus and Lucius from Apuleius‘ The Golden Ass — tend to be the main focus of Knight’s discussion rather than the various goddesses in question, and that’s a critical flaw. Overall Knight is far more interested in examining the Hero’s Journey these male protagonists undergo, each culminating in encounters with the divine feminine in the form of a goddess-figure, rather than delving into the goddess figures unto themselves. For me, that is a major problem in a book titled Magic and Power of the Goddess.3

The evidence really is readily apparent from the moment the book lays out the archetypes it means to explore. The moment I read that Branch One was Andromeda, “the chained maiden,” followed by Branch Two, Psyche, “the rescued maiden,” I was worried. Aside from Branch Six, “the Faery Queen or Mistress of the Magic Mountain,”4 none of these goddesses displays much agency unto herself. They are acted upon, chained or rescued, or looked upon as they sleep. If they do act, it’s never beyond the scope of the men who seek them out, purposefully or otherwise. As if the pinnacle of female power is being a glorified manic pixie dreamgirl!

In short, I found Magic and the Power of the Goddess a disappointing — and sometimes difficult — read. I don’t think there’s very much material here for occultniks, Pagans, witches or goddess worshippers looking for empowered and formidable goddesses to collaborate or enter into relationships with. One would be much better served with Jailbreaking the Goddess by Lasara Firefox Allen,5 which truly embraces radical feminal power. Adventurous seekers might even try a Google search; take things into your own hands and see — respectfully! — what mythology has to offer beyond Gareth Knight’s selection.

A few things you can find in this book, and which I think may be useful to some, are the two unique, in depth ritual exercises: “Becoming One with the Earth,” and the “Circling Exercise.”6 I didn’t try either of these myself, as both are quite long and involved. But they are rich in symbolism and intent, and may be exactly what someone is looking to add to their practice. Likewise, each goddess archetype offers a guided meditation at the end of its chapter. These may be harder to make use of than the more generalized rituals because they draw themes and imagery from Knight’s analysis, but they could be good resources, especially as recordings. The hidden gem in this book is the inclusion the full text of Lucius’ invocation to Isis from The Golden Ass. It’s a beautiful piece of ancient writing that I genuinely enjoyed reading, and I can imagine it being used to great effect during worship, in part or in full.

Whether those sections are enough to warrant picking up Gareth Knight’s Magic and the Power of the Goddess is, of course, up to the individual discretion. Everyone’s spiritual journeys and desires are different, so even if I can’t wholeheartedly recommend this book, it may be more worthwhile for someone else.