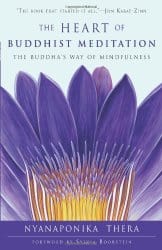 This book is issued in the deep conviction that the systematic cultivation of Right Mindfulness, as taught by the Buddha in his Discourse on Satipatthana, still provides the most simple and direct, the most thorough and effective, method for training and developing the mind for its daily tasks and problems as well as for its highest aim: mind’s own unshakable deliverance from Greed, Hatred and Delusion.1

The Heart of Buddhist Meditation is a classic of Western Buddhism from the ’50s, which Weiser has just republished on its 50th anniversary. It’s one of the first serious books on Vipassana meditation written for a Western audience. “This is the book that started it all — the book that, with great clarity and ardour, introduced Vipassana and mindfulness to the West.,” says Jon Kabat-Zinn, author of Mindfulness for Beginners.

As you work your way through the text, and it does take some work, you can see why this book is a classic due to its thorough nature. The book is divided into three sections. The first part, roughly half the text, is Nyanaponika Thera’s explanation of the practices. The other sections are parts of the Pali Canon dealing with mindfulness meditation, the Maha-Satipatthana-Sutta, and a variety of quotations from other suttas.

The first section deals with the theory of mindfulness meditation. What is Vipassana? Why is it so important? What does it do for you? It dovetails into how the mind works and then finally a few methods. The methods are all the standard forms of Vipassana and Anapana meditation, with emphasis on different placements of focus. The integration of Pali terms, and the English meanings and translations was really well done. It allowed the reader to understand the context and meaning of the words, but not feel as though it was being dumbed down for them.

In the last two sections the translation is good and easily accessible, and the chosen excepts of the texts really do a great job of supporting Nyanaponika Thera’s points.

While this is a reprint of a classic and a thorough text, there are a few problems with it. As said earlier, it is a text you will have to work with. Not so much because it is a complicated system, but because Nyanaponika Thera is fond of obtuse language, complex sentence structure, and run on sentences. (And if I’m calling someone out on those issues, that’s really saying something.)

A random example to show this style:

It may happen, and cause deep regrets afterwards, that a high ideal, or an important purpose that was forgotten or temporarily pushed aside for the sake of a passing whim of fancy, becomes, before being take up again, completely unattainable owing to a changed external situation caused by oneself, through just these incidental excursions.2

As you read you will have to refer back and forth in the sentences through commas, and parenthetical statements, to make sure you are following the right line of though.

Normally I don’t comment on the editing of a book, but sadly in this case I feel I really need to. Mistakes range from spelling mistakes, to misspelling Jung’s name as “G.G. Jung,” to a multitude of “dead” parenthesis that had an opening bracket, but were never closed, to an entire sentence that lacked any spacing between words. In a book where the language was already a bit trying and difficult, the spelling and editing errors were very noticeable and did interfere with the reading.

If you are a very serious Buddhist (specifically Theravadan practices) or practitioner of mindfulness meditation, this book would be an excellent addition to your library and serve you well to reread and work with. It is refreshing to see a Buddhist book from a Western publisher that is actually complex, in-depth, and correct. On the other hand if you’re not already very knowledgeable in Buddhist terminology and practices around Vipassana the language and style of this text will make it fairly inaccessible. You’d be better off finding a few beginner books and coming back to this in a few years.