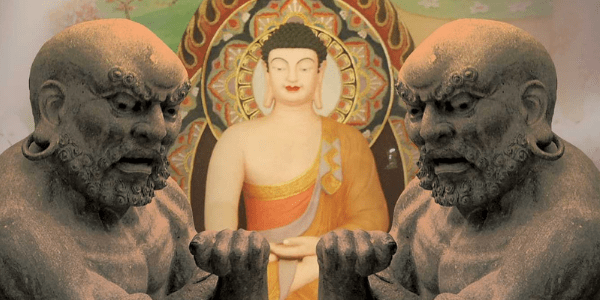 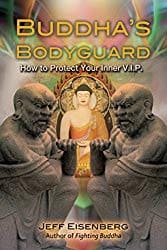 Jeff Eisenberg is a grand master level martial artist and meditation teacher with more than 40 years of training and 25 years of teaching experience under his black belt. Buddha’s Bodyguard: How to Protect Your Inner V.I.P. is a follow up to his best-selling book Fighting Buddha. His first book outlined the story of his personal journey, the second one is a more practical manual for others who would like to follow in his footsteps. He draws heavily on his martial arts background as well as his past professions as a bodyguard, investigator, and defensive tactics instructor, while creating this new way of presenting traditional Buddhist teachings in a more strategical way.

It was difficult at first to wrap my mind around this author’s tactical model and World of Warcraft vocabulary. The modern language was at times a little hip, like when he referred to the Master Siddhartha Gautama simply as “Sid.” I’ll admit that made me smile, but I wasn’t impressed with the way he used the term “New Age crystal gazers” as though it was meant as an insult.1 He goes on to warn that they may get their “chakras in a bunch” after reading his theories that correlate nonviolent Buddhist practices as a battle with fists and blood.

Buddhist thought tells us that as nature is the manifestation of truth, and of the teachings, we should cultivate kindness and compassion for all, and try not to kill or cause injury to any living creature, even the tiniest insect. Practitioners more familiar with traditional Buddhism may need to look at this book with an open mind and a thick skin. If you can get past all that, then you will find that he has simply laid out the fundamentals of the Buddhist tradition in a format like the traditional practices, but with more tactical explanations and headings.

The Four Noble Truths — Dukkha, Samudaya, Nirodha and Magga — contain the essence of the Buddha’s teachings. These are represented in this book as “The Four Noble Tactical Truths.” In chapter seven, The Eightfold Path is presented as “The Eightfold Tactical Plan.” He clearly understands the framework of the Buddhist system and defines those concepts well. The language might be new and different, but his message remains clear and consistent throughout, and it is easily understood.

All Buddhists live by the Five Moral Precepts which include refraining from harming living things and taking what is not given. Eisenberg starts his book off by talking about how certain forms of violence are necessary, and that may make it difficult for traditional Buddhists to get much farther than the first chapter. His vast understanding of law enforcement and defensive tactics allows him to explain how violence can be necessary to stop further violence. At times, the details of the moment can be taken in ways that result in unique manifestations appropriate to the individual. He would have us believe that sometimes the intention of caring about someone and not wanting them to hurt themselves, or others, outweighs the act of being completely nonviolent. This is reasonable, understandable even, but practicing it makes you less of a Buddhist. Violence, even when done for the right reasons, is still violence.

Most Buddhists would acknowledge the natural order of things where violence and death are a part of the cycle of the karmic wheel. They may even acknowledge violence is sometimes necessary in certain circumstances, but they would not recommend one participate in it because it is the antithesis of practicing dharma.

His assessment that embarking on the Buddhist path requires much work is spot on. Achieving any sort of spiritual enlightenment is work. Detecting and correcting programmed thoughts and behaviours within oneself is also work, and so is changing undesirable habits and actions. Some people imagine the path to spiritual enlightenment as an easy road filled with soft cushions, calm mantras, rhythmic chanting, and peaceful meditation while incense fills the room. Buddha’s Bodyguard shows how the truth is more complicated. It requires the ability to look at oneself in a deeply introspective and honest manner, coupled with the willingness to discover your personal road blocks and make the necessary changes. This process is essential in any method of enlightenment, self-initiation and cognitive change which places the greatest responsibility on the individual, but because of this, it also yields the truest reward. Eisenberg illustrates those ideas well within his new modality.

Another truth he brings to light is the concept that we each create our own existence. Here he brings up violence again, and talks about what the individual could have done to prevent it. While he states he isn’t trying to blame the victims themselves, this could be a trigger point for any readers who have previously felt victimized. He encourages us all to take responsibility for the part we play in creating our own world and in protecting ourselves.

Protecting one’s heart, mind, and self are paramount. As is the case with so many spiritual teachings, one must first realize the difference between external and internal influences. Eisenberg illustrates the importance of realizing that the Buddha and Buddhists teachings are already within us. We must tap into it and bring it out. Protecting oneself falls to the individual. This book explains how to define your vulnerabilities, come up with a plan to guard against them, and ultimately to eliminate them. He uses the terms like “shielding from harm” and “hardening the target,” which again sounds extreme and a little like barricading yourself up and hiding rather than confronting.2 Ultimately, he is talking about making decisions, defining your vulnerabilities and resolving them. In this way, he sees being a Buddhist and being a bodyguard as similar.

In all traditions there is some wiggle room when it comes to personal interpretations. A certain amount of openness allows these traditions to appeal to larger groups of people. The best teachers are the ones who have walked the path, taken the teachings, applied them to their life, and spit them back out in a new and different way. This is the best way to introduce old ideas to new people. That’s what Eisenberg has done here by taking a method that clearly worked for him, and laying it out in a way that is easy even for beginners to understand and utilize. Someone who has never considered Buddhist teachings could become interested because of his unique cloak and dagger presentation of the classic teachings.

Buddha is often compared to a physician. In the first two Noble Truths, he diagnosed the problem and identified its cause. The third Noble Truth is the realization that there is a cure. The fourth Noble Truth, in which the Buddha set out the Eightfold Path, is the prescription. In my opinion, that modern comparison fits much better than the one of a tactical, fist to face, bodyguard, even if Whitney Houston sings you a pretty theme song.

Overall, this new twist on an ancient tradition is concise and expertly laid out. I would recommend Buddha’s Bodyguard to anyone employed in fields spanning law enforcement, martial arts, or the military. The tactical terminology would appeal to linear thinkers new to Buddhism, as well as Buddhists who are looking to explore the traditional religion through a uniquely modern lens.