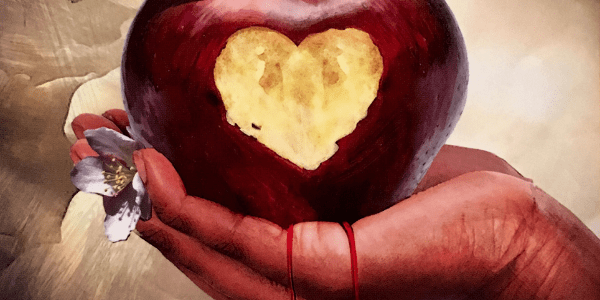 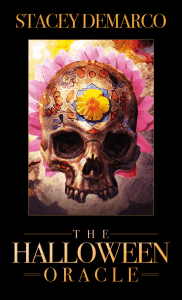 The Halloween Oracle App, by Stacey Demarco and with art by Jimmy Manton, is one of the best surprises this year has given me.

As soon as I read the name, I knew I had to try it and see what could happen. I have to admit that I was at first a little reluctant to use it. A part of me, despite the fact that I was excited to use it, wasn’t completely sure if a digital oracle would really work, even with this being a virtual version of Demarco’s published deck The Halloween Oracle, but, as if knowing what I was thinking, the app showed me otherwise.

I started with simple, basic questions. I was surprised when I realized the interpretations were useful and enlightening, just like with any respectable oracle or tarot deck. Several of the cards gave me either the answer to the question I asked, or gave the message I actually needed. It may be too early to say this, but I feel a connection forming between the Halloween Oracle App and me. Perhaps it’s just my preference for dark, gothic decks, helping in the process?

The three different spreads included in the app also give as much information as desired. So far, the Halloween Three-Card Draw is the one that has given me the right amount of guidance, but both the Single Card Divination and the Jack-O’-Lantern Divination have helped. I would like to have more freedom when drawing the cards, or maybe be able to use the classical Celtic Cross spread, but so far the three spreads have worked just fine.

Manton did an amazing job with the art. Combining the colourful, commercial themes of Halloween night with the spirituality and mythology of Samhain, the Halloween Oracle presents a dark and charming set of 36 cards — each of them with a unique, eerie scenario. I always watch the ones I get in a reading before getting into the interpretation. The level of detail is not that high, but the lines and the colours are more fluent than I initially expected.

One may guess that a deck like this would have only dark tones, or the classic mix of black and orange, but Manton also includes unusual, surprising colours, along with a lot of light, matching the meaning of each card. However, this is definitely a shadowy deck that uses creepy images, and cultural references to witches’ favourite holiday, doing so in a most artistic way.

The concepts Demarco developed for each card of the Halloween Oracle havea consistent shape and structure that I wouldn’t necessarily have connected with the images. There are a couple of symbols that I’m still learning to identify and connect to their meaning, but after reading the explanation of each card, it is easy enough to remember what it refers to. Some cases of this would be the cold, blue colour of the Zombie card, the windows in the Ghost card, and the spiral in the Spider card. Those elements seem to be enigmatic at first, but after reading their meanings, one beings to understand that blue is a metaphor for the lack (or express of control), that the window represents the limbo between life and death, and the spiral is the evolution that comes with teamwork.

There is not a lot of analysis in the cards, so beginners can easily use it and follow their ideas, but those with more experience can develop their own interpretations after a bit of practice. Demarco did a great job linking a different message with each card in the Halloween Oracle, although I feel more could have been included when I saw a reference to the Mexican Día de los Muertos (Day of the Dead) for those who are less familiar with it.

What I liked the most is the minimalist design, the simple special effects in the app, which give the highlight to the actual images, and that it is easy to use, practically intuitive. There are not a lot of sounds or animations, but those present are clean. I’m also relieved that there is no background music. I often find that to be distracting and almost always prefer to be in silence during my divination sessions.

The app is available for iPhone and Android cellphones for $7.99 (US) — a fair price for it. After several readings and learning how to use it, I came to the conclusion that it is a great deal. $8 is actually a good price and the amount of information, the quality of the artwork and the experience I got filled my expectations.

I plan to keep using the Halloween Oracle in the future, and maybe it is not a mere coincidence that I got it just before this year’s Samhain. You don’t always find something that combines creativity and trust-worthy information. There’s still a tiny part of myself that has a margin of doubt, but I know it is the right choice not to listen to it. This is one of those times when the ancient wisdom and the modern times blend together.