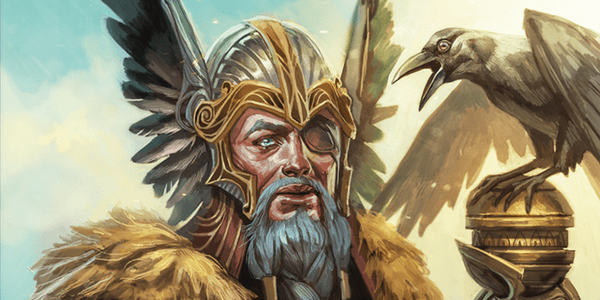 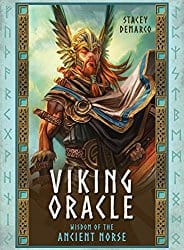 It’s always a pleasure when an author is able to convey the sense of wonder that she first felt upon making a special discovery. When Stacey Demarco writes about discovering the world of Norse mythology as a young girl, I feel as if I am standing alongside her, reading about Thor, Odin and Freyja for the very first time. Demarco writes with an infectious sincerity and warmth when describing these encounters. The first pages of the guidebook that accompanies the Viking Oracle 45-card deck are as good of an introduction to the Norse mythos as any I’ve seen.

The author follows this introduction with five pages of instructions on how to use the deck for divination. Unfortunately, this section was quite generic, with no particular connection to any ideas specifically attached to the Northern Tradition. Even a brief mention of the role of the volur, or the practices of galdr and seidr would have enhanced this section, but instead the reader is left with the standard formulations of divinatory card-laying, with a couple of perfunctory nods to the Norse theme, such as a “Nine Worlds” draw and a “Thor’s Hammer” draw.

Some of Demarco’s other choices in the deck highlight this departure from a specifically Nordic approach into something more generic as well. For example, she includes a 25th card to join the 24 cards of the Elder Futhark and refers to this card as “The Void.” She explains that, “Whilst not part of the Elder Futhark, it is a blank rune, which grew to be a part of the metaphysical and divinatory processes in the Runic tradition.”1 Leaving aside the academically problematic nature of the statement itself, if you should choose to include a void card, why not draw from the mythology and label that card Ginnungagap, the primal void from which all creation grew?

All of this points to a deeper problem, one which runs through so much of the interest in the occult and esoteric: the idea that you can approach these different traditions as if they were a buffet for you to choose from, laid on at a local restaurant, that Loki is naturally interchangeable with Coyote or Anansi, Freyja with Aphrodite, or that any old thunder god will do. This syncretic approach is exactly the problem that so many Pagans and Heathens have with Christianity, which has always told its followers that they can keep their festivals, but now they celebrate Christmas instead of Yule, the resurrection instead of fertility, and so on. You achieve a kind of homogeneity, but isn’t that the very thing that so many of us are trying to avoid?  Thus when Demarco gives us descriptions of the cards in her guidebook, I celebrate her short poems, composed in the spirit of the original rune poems, but then I wince when she tells us the elemental affinity of each card.

But enough of such concerns for the moment — what about the cards in action? I began with a “Nine Worlds” draw, which sounded appealing. I followed with a “Thor’s Hammer” draw, in the spirit of a fully Northern approach. Alas, skepticism is a mortal enemy of mysticism, even as laughter is lethal to eroticism.2 The cards lay deathlike and moribund before me, furnishing my sensibilities with nothing more than a sense of vague irritation and frustration. When consuming the sausage, one should never be thinking about how said sausage is made.

As for the cards themselves, they have that same quality of hit and miss. They are large, of good thick stock and lavishly colourful. Some of Jimmy Manton‘s images are stirring, and they look impressive when laid out upon a table. The quality of their construction is pleasing to the touch. Is it churlish for me to wonder why some runes deserve full panel illustrations, while others are simply reproductions of the runes themselves? Why Skadi deserves a full portrait, but Tyr is an arrow carved into a rock? He sacrificed his hand to chain Fenrir, for all our sakes! Surely we owe him a little more.

I worry that these criticisms comes across as mere pedantry. What does it matter if you call it the Void or Ginnungagap? They’re the same thing! Why shouldn’t the runes have elemental relationships? Doesn’t everything? Who cares if the Aesir and Vanir all look like they’ve been costumed by Andrew Lloyd Weber redoing The Ring Cycle?

The simplest answer, I suppose, is that I care. I don’t believe that the tradition that I love is something that can or should be reduced to a kind of New Age homogeneity. I find it disappointing that Demarco, who writes with such passion about her discovery of the Poetic Edda, would want to do this. Although Demarco herself very clearly has a strong grounding in rune lore and Norse history, the Viking Oracle does not. Her creation would be better served by a deeper foundation.