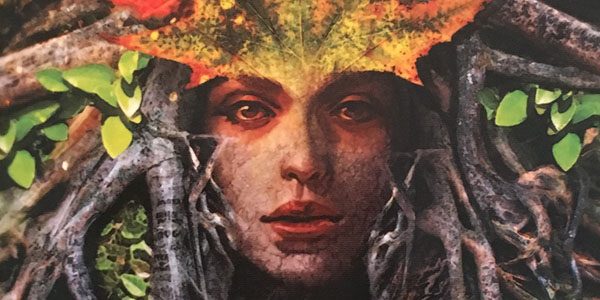 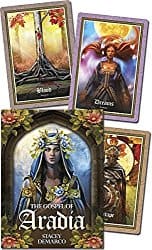 Veteran oracle deck creators Stacey Demarco and Jimmy Manton have teamed up again to produce The Gospel of Aradia. This gorgeous 34 card deck is inspired by the life and teachings of Aradia of Italy, a key figure in Stregheria, an Italian-American form of witchcraft, and other modern Pagan movements.

Aradia is a complex and controversial figure who often seems to have one foot in history and another in mythology. While she is a principle character in Charles Godfrey Leland’s 1899, Aradia, or The Gospel of Witches,1 her own mythos as the first of all witches and daughter of the moon goddess, Diana, sets her up as a messianic figure who wandered the Italian countryside teaching oppressed women and peasants the secrets of healing, herb lore and witchcraft. Demarco deftly addresses Aradia’s possible origins with a gentle, objective touch in the introduction of the guidebook included with the oracle set.

She also includes three brief stories of Aradia’s teachings so readers can get a feel for her. In one, Aradia rewards a poor woman for her hospitality; in another, she helps a maiden find love, and in the final story, Aradia finds love herself and so brings a kingdom into balance and harmony. These stories read like fairy tales or folk stories but, even more than the guide’s introduction, they contain the spirit of Aradia and Demarco’s intention in harnessing her wisdom for this deck.

The Gospel of Aradia oracle comes packaged in a sturdy box that brings Jimmy Manton’s illustrations front and centre. The cards are slightly larger-than-average, and printed on very glossy stock. I was slightly nervous that the large size compared to other decks in my collection — which really is a pro and not a con, because it showcases the artwork beautifully — combined with the glossy finish would make the deck slippery and hard to shuffle, especially if you have smaller-than-average hands like I do. However, I quickly found that the opposite was true. This deck shuffles like a dream! One note of caution though: the first time I picked up the cards to look through them, the cards’ surfaces stuck together. It wasn’t a serious problem, they were easy to un-stick without damaging the cards, and it hasn’t happened again since. I suspect it’s a quirk in the packaging process, but you may want to treat the deck gently the first time you handle it.

The deck’s artwork is nothing short of gorgeous and may be familiar to those who own other oracle decks created by this author and illustrator pair, such as The Halloween Oracle or the The Goddesses and Sirens Oracle. I really like Jimmy Manton’s vivid, semi-realistic style. The rich colours, textures and sometimes visible brushstrokes give the cards a strong creative energy, even when they’re depicting settings or objects rather than people.

Characters recur in many of these cards: a brunette woman I took to be Aradia, a red-haired woman who seems to be Aradia’s friend and follower, and a bearded man who only appears a handful of times. There’s something I like about this artistic direction. Recurring characters appearing in different positions during a reading may create interesting visual links and insights that aren’t initially apparent. But on the other hand, with only three characters appearing throughout 34 cards, the deck does lack a high degree of diversity. Its energy, while inspiring and potent, skews very feminine. While that appeals to me, and is something I’m comfortable working with, others may prefer a more gender neutral option.

Aradia’s spirit translates into creatively-focused, uplifting, and empowering readings. To get a feel for the deck, I did two career-related readings: a two card draw the night before an interview and an in-depth 13 card reading using the “Aradia’s Journey” spread, one of three sample layouts provided in the deck’s guidebook. In both of these readings, there was a strong focus on following my own path, and pursuing my creative endeavors without regard for “hierarchy.” For example, the message in my two card reading boiled down to “follow your own path, become the Queen of your own life.”

What followed the next day was the most awkward, uncomfortable and vaguely disastrous job interview I’ve ever had. I can’t dispute that accuracy of the reading in that respect. It was a bad fit and that position would have made me unhappy, had I been offered it. My concern is that similar sentiments of following my path, creating my own projects and living on my own terms carried over into my second career reading. In that regard this deck has a real subversive streak — and perhaps it’s true to the spirit of Aradia herself — I just wonder about the practicality of those messages.

I think The Gospel of Aradia’s real value is in creatively-focused readings. A writer friend of mine, knowing I was testing out the deck for review, asked for a reading related to her manuscript. She had been struggling with where to begin her first novel after it had gone through a number of major changes and wanted to know what her inciting incident should be. We’ve been bouncing ideas for our creative writing off each other for years now, and after I laid out the three card spread we both had a palpable moment of whoa as the cards pointed to the thematic issue that starts her main character on his journey, and a specific, highly unusual character trait she could draw on to give the plot momentum.

Working with this deck was a highly intuitive process. I was able to develop an interpretation from the cards themselves before cross referencing the guidebook. In most cases what I came up with was relatively close to the meanings outlined in the book, if not more meaningful where the two diverged. Even on its own, the guide gives you plenty to work with. For each card it provides a summary of its meaning, some rhymed verse inspired by the card, and extra information on the card’s role and function, including how its subject might have factored into Aradia’s life and practice.

The Gospel of Aradia is a well thought out deck with wide appeal. Its intuitive nature and comprehensive guidebook make it an accessible first deck for beginners, while the packaging makes it an attractive choice for collectors. It’s also bound to speak to modern practitioners of witchcraft and magick, especially those in the Strega tradition. I’m sure I’ll continue to reach for it for self-affirmation and insight on my creative endeavours.