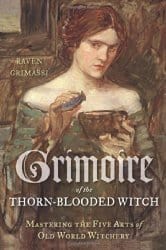 Plant spirits appear in the most ancient practices of Witchcraft. These primal entities possess power and knowledge that aids the Witches’ Craft.1

Grimoire of the Thorn-Blooded Witch offers the magickal keys to accessing the spirits of the plant kingdom. Decidedly gothic, with many allusions to roses, thorns and shadows, the book’s formal, atmospheric tone is sure to stir magickal memories in the blood of those called to read it.

From the ancient practices of old world witchery springs the Rose and Thorn Path, a system Grimassi manifested after he “fell back into the brewing cauldron from which all things emerge.” He continues, “When I surfaced my self-identity as a witch of any specific cultural expression of witchcraft had dissolved away’.2 As a grimoire (a traditional book of spells) this book does not disappoint. It presents a usable system of witchcraft based on instantly recognisable archetypes. I have read a few of Grimassi’s books and feel this is his best to date.

The “mastering the five arts” subtitle suggests the book is aimed primarily at serious witches with some level of magical experience. As such I would have appreciated a deeper exploration of the origins of Grimassi’s chosen symbols and plants, but he writes with such authentic wisdom this hardly seems to matter. Central themes are natural divinity and spiritualism — the book deals not so much with plants themselves but the spirits inherent in and attached to them. By showing respect for “Shadow” (the collective wisdom of the earth and ancestors) the green mysteries can be entered.

The first chapter expounds just enough theory to throw off casual wanderers into the secret thicket. The rest of the book is full of practical magick: spells, invocations, diagrams, sigils, seals and delightfully wrought rites, some slightly wordy, but presumably the reader can cherry-pick the passages they wish to use. I found humour amid the formalities too, during one lengthy cross-eyed ceremony as I tried to view the moon using only my left eye while simultaneously reading instructions and gesticulating.

Apart from the occasional unwieldy line of poetry the incantations are lovely, their magick fairly glowing from the pages. The invocation of She of the White Round3 (a form of circle casting) is one of the most beautiful I have ever read. As Grimassi promises, while reading this book “you will walk the rustic paths leading into the deep wooded places” and “moonlight will reflect from the written word.”4

Grimassi presents the mortar and pestle as traditional magical tools, and reconnects the witch’s broom with riding the spirits of plants. The magick ring, stangs, stones, cauldron and blackthorn rods (as well as the more familiar wand, knife, pentacle and chalice) are discussed as tools of the trade. If you haven’t already consecrated your tools and would like to do so there is plenty of inspiration here.

Problems around the naming of entities begin to crop up in chapter 4: “Working with plant spirits requires a pre-established connection with She of the Thorn-Blooded Rose.”5 Surely doorways into the green mysteries are everywhere, but Grimassi names this particular entity as an essential “sacred initiatory force,” guide and guardian of witches in the plant spirit realms.

The rose has long held magickal significance for witches.6 The rose cross of the Golden Dawn and the rose ankh of Alexandrian witchcraft were used as goddess symbols and energy vortices. Scott Cunningham in his Encyclopedia of Magical Herbs associated roses with Venus, Hathor, Hulda, Eros, Cupid, Demeter, Isis, Adonis, Harpocrates, and Aurora, prophetic dreams, the attraction of faeries, protection, healing, luck, and love. In Grimassi’s earlier book, Old World Witchcraft (2011),7 he suggests using any plant of the rose family (e.g. hawthorn, apple) to call up the magical powers of Shadow and join “the rose lineage.”8 He describes the “genius” of a plant species9 (referred to by Christopher Penzak in Spirit Allies as the “overlighting deva”) as an entity who can share the secrets of that plant with a witch if addressed using the correct protocols. After some consideration,10 rather than naming She of the Thorn-blooded Rose as my intermediary for all plant spirits, I opted for Grimassi’s method to “draw the collective spirit of the Greenwood beings,”11 and sure enough a new dimension opened to me.

Green witches may be accustomed to using dried herbs, juice from leaves or fruits, infusions, or essential oils. In this grimoire, liquid chlorophyll is recommended for ritual use as “green blood,” representing the life energy of the plant kingdom as a whole (rather than any individual plant or family of plants). I found chlorophyll to be an effective aid — visually dramatic, and safe to consume.

This book is not for the faint-of-heart but for those who would brave the many thorns of the rosy prize. It does contain some rites I would not choose to perform, but a respectful, safe blueprint is provided for those who would. For example, I would not be comfortable with commanding a trapped plant spirit to do my bidding for three full days before releasing it, but I would use invocations for specific plant energies (e.g. rowan for protection, rose for secrecy). And while I’m not one for using seals and sigils, I loved the planetary spells12 and the mortar and pestle techniques for healing, binding, and quelling.

Grimoire of the Thorn-blooded Witch deals with spirits of the rare and often poisonous herbs of classical witchcraft such as hemlock, aconite, and mandrake. Working with toxic plants necessitates keeping a safe physical (and therefore energetic) distance. For me the use of magical seals does not adequately compensate for this. I would prefer to explore a broader range of plant species; after all, powerful plants abound.

The terminology used to address deities and spirits in the rites tends to be general (Lord of the Reeds, Lady of Fire, etc.), whereas more personified names are used in the “Mythos” chapter. The reason for this discrepancy is unclear. There is some evidence (in the excellent section on group rites, and in his other books) that Grimassi intends for readers to embellish the names according to our own associations.

Chapter 6, “The Old Ones,” elucidates the deities of the Rose and Thorn Path, who are familiar entities renamed. The Three Daughters of Night resemble the three fates and triple moon goddess. Hecate is translated into She of the Crossroads. I love these generalized, poetic names. Removing the archetypes from their cultural trappings in no way diminishes them. Grimassi explains that “to name a deity is to place a finite nature on it. Therefore, we prefer the use of descriptive titles.”13 Elemental spirits are collectively called Asthesia (from the Greek root for sensation? No explanation is given). The elements are assigned the traditional directions of Wicca: earth in the north, air in the east, fire in the south, and water in the west.

Then, in the mythos of chapter 7, the Rose and Thorn deities emerge from the general archetypes, and are named — a snake, Pythos, and dragon, Vepres, reminiscent of the kundalini or phoenix (with the addition of rose petal scales), and a star goddess, Kaelifera, hinting of Persephone or Inanna. The White Tree, a familiar mythical concept (Persian, Celtic, Norse), joins the earthly with the divine. The underworld is called LuNeya, and faeries the Lantra. Why name the Three Daughters of Night Potia, Arria and Timia? Presumably to tie them more closely to the snake, rose and skull symbolism of the Rose and Thorn path. Having dissociated the entities from their old aspects, Grimassi then endows them with new aspects. This approach seems somewhat contradictory, but it makes for a fresh, mysterious, and almost seamless blend of old and new.

Like others in the book, the “Old Rites” of chapter 8 are very traditional in nature and style, and detailed down to the exact words spoken and number of movements made. There is quite a bit of summoning of spirits at crossroads and the like. A novice witch would find the rites powerful verbatim, and a more experienced witch could adapt them. I particularly enjoyed the Dewy Rite of the Moon for collecting dew to charge herbs for use in spellcraft, and the Rite of the Trident for “claiming your mastery” as a witch.

The final chapter lays out the bare bones of the Rose and Thorn path — the particulars of setting the altar and circle, and the wheel of the year cycle. The seasonal interaction of God and Goddess14 is similar to that in other traditions, but the names of familiar sabbats are changed in Grimassi’s new system, e.g. Gadrian for Samhain and Meadwey for Beltane. His reason for such nomenclature is “so that people don’t bring with them their preconceived ideas and views.” The only explanation for the origin of each new sabbat name is that it is “from an old word.” I, for one, would like to know more about the etymology here.

As a pharmakeute I heartily recommend this book to any nature-loving witch hankering for some good old fashioned magical practice. It is great grist for experienced crafters and will no doubt blow the minds of many beginners. A novice may well choose this guide over others because of its focus on traditional green magick and its respected author. It will appeal to many, with sigils and pentagrams for ceremonial magicians, tree lore for Druids, wheel of the year rituals, moon rites, greenwood faerie folk, clear outlines for traditionalists and beginners, refreshing inspiration for seasoned practitioners, and esoterica for scholars. If founding a new branch of witchcraft is part of its goal, Grimoire of the Thorn-Blooded Witch is also a gift to the broader witchcraft community. I salute Grimassi’s creativity, and I hope he allows for readers to be equally creative in their interpretations.