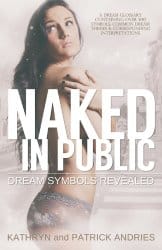 There’s a well-known episode of NPR’s This American Life called “The Seven Things You’re Not Supposed to Talk About.” One of those things: dreams. Why? Because, as the main guest explains, “Nobody cares about your dreams.”

A bit harsh, maybe, but at the very least, dreams are a double-edged sword. To the dreamer, they may manifest as fascinating, glorious, terrifying, or even life-changing adventures. To the person listening to them, on the other hand (or reading about them), they are too often simply exercises in ennui and narcissism. After all, how often has somebody’s self-proclaimed “craziest dream ever” sounded merely banal to your own ears? If you’re anything like me and the folks at NPR, it’s happened a lot — which is why I was pleasantly surprised by the Andries’ dream glossary, Naked in Public: Dream Symbols Revealed, an utterly enjoyable and educational book that rarely thrusts the reader unwilling into the someone else’s tedious sub-psyche or allows itself to get bogged down by extraneous details.

The first thing you might notice about Naked in Public is that it is, unlike so many other dream compendiums, it’s quite light at just 112 pages, and not weighed down by the kind of overly academic psychobabble that pervades so much dream literature. This isn’t a book for someone with a PhD-like grasp of dreamology; it’s a book for the rest of us.

It’s also a remarkably practical read. Rather than just present a litany of dream interpretations, the authors explain in simple terms how to manage, interpret, and even shape your dreams.  They discuss, among other topics, how outside forces including media, food, other people, and mind-altering substances can affect your subconscious mind. Touching on topics ranging from lucid dreaming, to sleepwalking, religion, why children have nightmares (they may have nothing to do with that scary movie after all), and the roles your interconnected conscious, subconscious and superconscious play in dreaming, the authors present a thorough overview of all things dream-related to the non-experts among us.

The authors begin with a brief intro of how dreams have been perceived throughout history, noting the diverse views that different cultures held over the centuries: to the ancient Egyptians, they were signs from gods; to Martin Luther, they were tools through which the devil tempted you. The authors then touch on the science of dreaming, expounding upon the stages your brain goes through during sleep and how different foods (proteins, carbs, calcium, etc.) affect your sleeping habits. It’s at this point that you first start to realize that this book has practical value beyond the human interest level. You learn, among other things, that alcohol, often perceived as an insomnia remedy, is actually conducive to shorter dreams, broken sleep, and even nightmares. Adios, nightcap.

The Andries then touch on the numerous benefits of dream interpretation, for example, that dreams may help us identify our life’s purpose, alter our negative karmic patterns, and make us aware of personality traits we didn’t realize existed. They follow this up with more practical value, this time in the form of a seven step dream interpretation routine that begins with decoding your dreams and ends with applying what you learned in the dream to your everyday life.

Along with a chapter of dream scenarios (which, fortunately, aren’t so saturated with details that the reader loses interest), the authors then present the two meatiest chapters of the book: “Managing Your Dreams” and “Shaping Your Dreams.” This is where the novice dreamer really begins to get an understanding of how to enhance dream recall using certain oils, herbs, stones, and crystals if needed; and even take control of one’s dreams with the help of music, yoga, and meditation. These chapters are also where the Andries’ most pertinent message (at least for this reader) becomes apparent: namely, that in order to shape, recall, and understand our dreams, we must first quiet our waking minds and take active steps in our waking hours to unite our various forms of conscious. Dreams, after all, aren’t solitary, alien forms that simply invade us during the night, but manifestations and reflections of our waking beliefs, fears, understandings, and actions.

Like most of us, I imagine, I have a deeply personal, downright exhausting relationship with all those fragmented images that flash through my mind while I’m supposed to be at rest. I won’t delve too deep into the details here – dreams, after all, aren’t one of things people should usually talk about. But I’m glad Kathryn and Patrick Andries took the time with Naked in Public to do so.

Transformational Power of Dreaming, by Stephen Larsen and Tom Verner