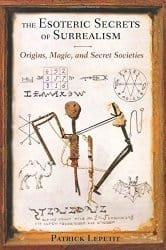 The Esoteric Secrets of Surrealism symbolizes a reuniting of art, science, and mysticism: the head, body, and heart, all working together.

As an artistic movement surrealism seeks to “resolve the previously contradictory conditions of dream and reality” as a revolutionary act.1 From the outset, the surrealists declared war on rationality, which had allowed for the atrocities of two world wars to take place, causing French novelist Albert Camus to proclaim that “surrealism’s essential enemy is rationalism.”2 Devoted anarchists, the surrealists felt that “so long as revolutionaries confine themselves to certain specific aspects of social life without attacking the spiritual structure of society directly,” then they were doomed to failure.3 This caused poet Tristan Tzara to claim that “the love of ghosts, witchcraft, occultism, magic, vice, dream, madness, passions, true or invented folklore, mythology (or even mystification), social or other kinds of utopias, real or imagined journeys, bric-a-brac, marvels, the adventures and mores of primitive peoples and generally everything that did not fit into the rigid frameworks in which beauty had been placed to identify itself with the mind.”4

The surrealists were interested in occult and metaphysical currents from the very beginning — as seen with the Vodou-ispired works of Cuban painter Wifredo Lam, or the explicitly Pagan paintings of Leonora Carrington — although often not in so many words, as they “ventured onto the terrain of mediumship stripped of its spiritualist clutter.”5 In the process the surrealists would become a kind of secret society and take a similar role to that of the Freemasons or Rosicrucians6 in the Enlightenment, illuminating and updating the age old mysteries with emerging schools of thought like psychoanalysis, quantum physics, and relativity.

The book is comprised of 14 chapters, each dealing with a separate tradition. Lepetit covers a lot of ground, delving into the deep realms of tarot, astrology, alchemy, the kabbalah, secret societies, Vodou, myth, magick, Arthurian legends, gothic romanticism, and more, as to how they relate to the Surrealist movement. The book comes off as a primer or survey course in the entirety of metaphysical thought. Each one of these massive subjects could have warranted a tome of its own, but it’s useful to have them all in one place, and as viewed through the surrealist lens. Esoteric Secrets could be a postmodern surrealist text on its own, as it’s thick with annotations, allusions, and quotations.

Esoteric Secrets of Surrealism revolves around a number of the leading lights of the Surrealist movement, particularly Andre Breton, whom the author casts as a kind of pope or hierophant to the movement, which makes sense as he did coin the movement’s name. Other well known surrealists, particularly Max Ernst, Salvador Dali, Tristan Tzara, Antonin Artaud, and Pablo Picasso make appearances, along with lesser known but fascinating individuals like Leonora Carrington and Charles Duits. Patrick Lepetit also introduces the reader to some of the most brilliant minds of recorded history, with a cast of thousands of illuminated masters and divine scientists. You will be introduced to Fulcanelli, Giordano Bruno, King Rudolph II, Copernicus, Galileo, Paracelsus, John Dee, and countless more. I very much appreciated the opportunity to learn more about individuals I was interested in, and I’m looking forward to learning more about the new names I discovered while reading this book. Many of the texts cited are not readily available in English, particularly Charles Duits’ works, which is another fine reason to have this in your library.

Esoteric Secrets is conducted with strict academic acumen, showing the author is well-versed in not only the entire history of metaphysical thought and art history, but academia and philosophy as well. This makes Esoteric Secrets an essential addition to every magical and surrealist library, as academia doesn’t often turn its gaze on magical currents or traditions, especially not on its own terms, and metaphysists are too often content to speak in their own coded language.

The language pulls no punches, and only people who are already familiar with occult modes of thought will know fully what the author is getting at. This reveals one of the book’s possible limitations, although it could be seen as a boon as well. With each section being so condensed (yet running roughly 50 pages), Lepetit is only able to touch on each topic. He dives right into the deep end, as each chapters delves into the most theoretical nature of its subject. The initiated will find a plethora of deep commentary on a wide variety of topics.

I particularly enjoyed the chapters on dark romanticism, Vodou, and alchemy, which are some of the areas of special interest to my studies, and it seems to me that The Esoteric Secrets of Surrealism‘s best use is an addendum to your own areas of investigation, thought it also serves as a way to branch out and learn something about traditions you’re not as familiar with.

Patrick Lepetit’s ability to provide practical visualizations and insights into a wide array of extremely complex topics should be of interest to every occult student. He makes offhanded remarks about the Great Work; the philosopher’s stone; the alchemical marriage; Chapel Perilous; the Holy Grail; the veil of manifestation in kabbalah. I was particularly grateful for a number of excellent quotes and thoughts on The Star tarot card, which quotes extensively from Andre Breton’s Arcanum XVII. The Star relates to the astrological sign Aquarius, and deals with the future, community, revolution, and utopia, and, because it doesn’t exist on Earth, I feel like a lot of people don’t understand it, making it difficult to read in a tarot spread. Or Lepetit’s beautifully simple and eloquent illustration of the hermetic axiom, “as above, so below,” as “one eye looking in a telescope, the other in a microscope.” These are some minute examples of how the material in Lepetit’s excellent primer can manifest in your daily life.

This book couldn’t come at a better time. With the prevalence and accessibility of information nowadays, we have both a larger appreciation and knowledge of the past than ever before, and also a disregard for it. We are interested in great art and great ideas, but don’t always take the time to appreciate it, remember where it comes from, and why it was and remains important. We don’t always know where or how to begin, particularly in the dense and daunting worlds of both occultism and avant-garde art history.

The Esoteric Secrets of Surrealism manages to cut the velvet ropes and free surrealism from the galleries and hallowed halls of the university, and provide a very concise and pointed illustration of 2000 years of magical thought — all at the same time. It can be a dizzying experience; simultaneously overwhelming, and uplifting — the sensation of the mind approaching the absolute. And while it may tax the attention span at times, it is good practice, and a wonderful example of the “inflaming one’s self in prayer” of the kaballist supplicant. Lepetit reminds us, with his 25 page bibliography and extensive annotation, that there is always more to know, more to study. On one hand, this thought is devastating as the mind, by its very nature, cannot and will never comprehend the ultimate, but exploring the facets with ecstatic poetry and a curious mind is a great work indeed.