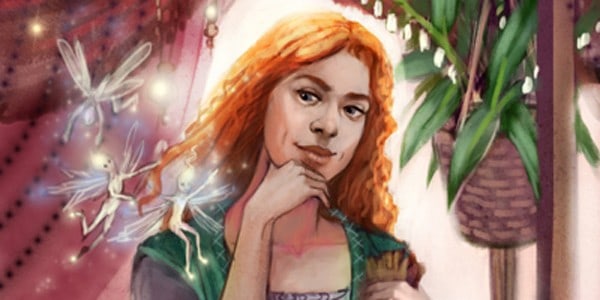 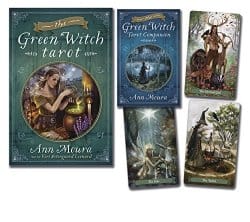 The Green Witch Tarot was created by author Ann Moura. A solitary practitioner for more than 45 years, Moura follows the tradition of her mother and grandmother; a tradition which she calls green witchcraft. A green witch is one that practices natural witchcraft and draws on the energy of herbs, crystals, animals, and the elements. In keeping with that tradition, this tarot is designed as a divinatory deck in true green witch style.

During my 25 plus years of reading tarot, I have come across a wide range of decks and accompanying workbooks. The Green Witch Tarot is one of my favourites in both respects. It is beautifully packaged in a sturdy box. The set comes with a full 78-card tarot deck and The Green Witch Companion book. The deck is printed on quality stock with a glossy sheen that makes it easy to handle. The back of the cards are emblazoned with a wreath of roses centered by an evergreen pentacle hung on a wooden door. Each card has a frameless image with unique and delightful details in vibrant colors. The four suits are Athames (Swords), Chalices (Cups), Pentacles, and Wands. Some of the names of the cards in the major arcana have been changed in keeping with the Wiccan themes, for example, the Justice card becomes the Standing Stone, Temperance becomes the Sidhe, and the Hermit becomes the Holly King.

This deck  has unique illustrations on each card, and this makes reading the minor arcana cards much more intuitive. For example, the 8 of Athames, rather than just depicting 8 knives, has an image of a blindfolded woman with eight knives protruding from the ground around her feet. In the background is an apple tree bearing fruit and a hedgehog. Though the woman cannot see where to go, she is currently safe where she stands. This may represent an initiation, or a test of trust. The apples in the tree and on the ground represent insight and self-discipline, and the hedgehog represents intuition and resourcefulness.

Thanks to the companion book, The Green Witch Tarot is suitable for beginners and more experienced readers. The guide is very comprehensive and offers a detailed interpretation of each card, from the figures down to the plant and animal imagery. There is also a blank page after each card’s meaning so that the reader can make their own notes. The sample spreads at the end of the book are the familiar traditional spreads, such as the Celtic Cross (here called the Witch’s Circle), the Wheel of The Year Spread, and the Tree of Life Spread, but don’t be deterred, this deck is so intuitive that you can easily design your own spreads to suit any situation.

Because I am a fiction writer, one of the things I enjoy to do with tarot — though not all decks necessarily lend themselves to this — is storytelling. Although, in a way, every reading is like gradually revealing part of a life story, my form of storytelling is somewhat different. I pick out a specific card from the deck; either a character whose story I wish to tell, or perhaps an event I want to take place in the story. After shuffling the rest of the deck I spread them out in a fan, face down on the table. I then draw nine cards and lay them beneath my significator card. Then I star to write, noticing every detail of the cards. Sometimes I have enough detail with the nine cards, other times I will focus on a question and draw more cards to help me answer. As well as divination, the Green Witch Tarot is perfect for this type of storytelling because of the rich detail in every single card, from the characters in the foreground to the animals and plants in the background. For example, The Green Man (one of my favorite cards in the deck) depicts a large face of the leafy, historical portrayal of the Green Man, representing the fertility of spring. In front of him, three figures are dancing and playing instruments in celebration of the season. The cards colors are as vibrant as the fertile season itself and the richness of spring and optimism for the recommencement of the cycle of nature is encapsulated in this card. I will never have writer’s block again, so long as I have this deck.

The Green Witch Tarot is a great starter deck and continuing practice deck, though you may feel more comfortable with it if you are familiar with the Green Witch or Wiccan tradition. The earthy images draw on the full symbolism of nature, plant lore, and animal totems, and anyone with an interest in these areas will love this deck.