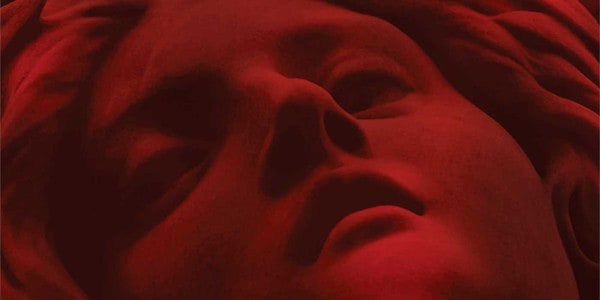 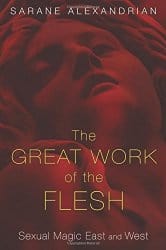 Sarane Alexandrian (1927-2009) was the author of more than 60 books, including several on occultism and art. In Paris, he was involved with Dadaism and surrealism, and the last secretary of Andre Breton. Originally published in French in 2000, The Great Work of the Flesh is Alexandrian’s latest book to be translated into English.

In The Great Work of the Flesh, Alexandrian looks at the various ways sex has been used in magical practice, from love spells, to the use of sexual excretions in magick. He presents a roughly chronological catalogue of sex magick theories and practices from the Middle Ages to more contemporary practitioners.

Alexandrian identifies Paschal Beverly Randolph as the founder of modern sex magick,1 and offers a survey of Randolph’s teachings, techniques, and practices.2 From Randolph we turn to Carl Kellner, and the founding of the Ordo Templi Orientis,3 and Theodor Reuss. This, of course, leads into Aleister Crowley, and his works. However, Alexandrian oddly leaves out Crowley’s homosexual affairs, and their central importance to his work. While Victor Neuburg is mentioned, his work with Crowley is glossed over, and only mentioned in passing among a list of female “conquests,” so-called.

From here Alexandrian dives into Crowleyan offshoots such as the Great Brotherhood of God of Cecil  F. Russell and Louis T. Culling, Jack Parsons‘ OTO lodge in California, and others influenced by Crowley’s work.

It is refreshing to see the work of Austin Osman Spare addressed, as his work with sexual magick often seems to be left out of books on the general subject. Alexandrian covers Spare’s brief period in Crowley’s A.’.A.’., and his collaboration with Crowley in The Equinox, as well as the publications of The Book of Pleasure, The Focus of Life, and The Anathema of Zos, as well as Spare’s outline for the Zos Kia Cultus. Margot Anand is the one woman discussed in any detail in Alexandrian’s book, and her teachings draw on the work of Austin Osman Spare and sexual tantra.

Julius Evola and the Ur Group are mentioned, with magnetism used to explain sexual make up and attraction, as adapted from Otto Weininger.4 These theories are echoed from Randolph, and don’t seem to have much practical use today, but as a historical survey, the information may provide useful for tracing the history of ideas of sexual magick and its various practices.

The section focusing on sexual alchemy is, like the rest of the text, predominately heterosexual, and decidedly focused on the male perspective, while the “body of the woman is his athanor.”5 Which is typical, even today, but disappointing nonetheless. In contrast, Kristofer Schipper is cited as noting that “There was no such thing as one active and one passive partner”6 in regards to a notation on a medieval manuscript, thus counteracting all sorts of harmful misunderstandings present in so much of past and continuing through contemporary sex magical practices, or things written about sex magick for the past hundred years.

This survey of the history of sex magick past and present thus complete, Alexandrian gets into his own here, and offers his own advice for couples performing sexual magick. One rite involves pulling a tarot card from the Thoth Tarot for each partner from the trump cards to inform the rite. Though curiously he identifies the Chariot as the card of Babalon, rather than Strength or Lust.7 The rites following are decidedly heterosexual, with no coherent suggestions for how to perform them as a same-sex couple, or for those who identify outside the binary. Further, his language surrounding the possibility of alternate practices comes across as overly judgemental and even hostile.8

The coda concluding the book gives a largely sensational description of Wicca and contemporary Paganism. There is some irony in his description of their practices, as well as the Church of Satan, as “degeneration of sex magic principles,”9 given his vociferous praise of Aleister Crowley.

The Great Work of the Flesh provides a survey of practices from a variety of sources on sexual magick, and outlines many techniques, rather than provide a coherent system to put into effect. Fortunately, it is thoroughly footnoted, so the reader can find the original sources of inspiration and investigate further.