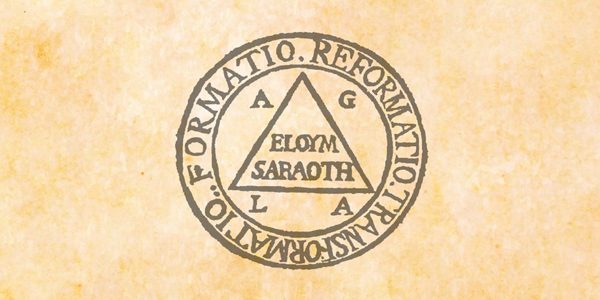 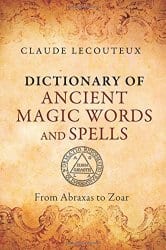 Claude Lecouteux is a clear master in his field.  His extensive body of work centres on old magick.  Published works include Return of the Dead,1 The Tradition of Household Spirits, The Book of Grimoires, and The High Magic of Talismans and Amulets,2 to name a few.  A resident of Paris and a professor of the literature and civilization of the Middle Ages, Lecouteux is the right person to compile this dictionary. Part etymology, part cultural history, The Dictionary of Ancient Magic Words and Spells brings a range of influences and understandings together to weave a clear and useful fabric in the Western occult tradition.

Lecouteux clearly enjoys his topic and approaches it with a delightful balance of academic research and wonder. His tone bridges historical context with the strangeness of medieval magick. While the book focuses primarily on the words used in spells, some instructions are given when available.

There are a few outliers from Roman-occupied Africa and charms from as late 2012 CE, but the majority of entries in the dictionary are from Europe in the Middle Ages and cover folk- and some high magick. This makes it a wonderful starting point for diving into medieval magick, with further references and texts sprinkled generously throughout the book.

Lecouteux sets the stage in the Praeambulus, discussing the power in words across times and cultures. Not only are there entries covering the entire alphabet, but three appendices round out the back end of the book. The first lists the use of caracteres — encrypted symbols used as letters within spells.  There is also an appendix of cryptography containing a variety of magical alphabets”  These two appendices are filled with stunning reproductions of original texts and documents, lending a visual component to all the carefully worded definitions in the book. Lastly, Lecouteux lists each word from the spells presented in a chart, providing the location of the full spell, and an extensive bibliography for the original sources and references cited throughout the book. Most exciting of all are the original texts available online, listed on the appendix’s last two pages.

Much of the dictionary’s information has not previously been published or shared. Lecouteux and his colleagues have combed under church floorboards in Iceland, through scrolls from Spain, and in old German farmhouses to bring  these words of power to light. Due to the the nature of medieval magick, many of the spells employ names of the Abrahamic god, and the holy trinity. There are many orisons (prayers), older spells concealed within a veneer of Christianity.  “Hail Marys” and “Our Fathers” feature heavily, making this a wonderful reference for Catholic occultists, medieval reconstructionists, or reenactors. I can see authors of medieval fantasy or fiction using this as a resource, lending a great authenticity to their work. In fact, Lecouteux references some well-known literary works that use variations or direct borrowings from these spells, like the Harry Potter series.

Some of the spells referenced are delivered in Latin, German, or Greek.  Readers don’t need to know these languages for the dictionary to be accessible, though I had fun flexing my old Latin muscles in some of these passages.  There are many complex spells, and many short ones, though most are certainly quirky by modern standards. My favourite sort of spells contain the coded use of abracadabra in a reductive spell. By reducing the word one letter at a time in a row beneath the original word, a written amulet is created. Coding the vowels in “abracadabra” ensures someone must know the right key to understand the amulet perfectly. This technique is one way variations in these spells occur. Lecouteux writes that historically it was quite normal for the translation of an “idiom foreign to the local tongue [to be] viewed as magical.”3

There are many kinds of spells shown throughout the book.  A mix of folk practices, scraps of older magick from Greece and Egypt, and Pope-written charms feature in many entries. A once-common theme of these spells was to use one, or a number of, names of God — YWH, Jehovah, Christ, and Ra being among the popular in Alexandrian magical lineages. My interest was particularly peaked by the entry on “reductive spells”4 that describes the writing of a magical word or phrase that is then reduced by one letter each row, descending until only one letter can be seen.  Often that one letter can be used in later spells as a caractere. A string of these caracteres may be written as an amulet to be worn or carried with a person. I am inspired to make my own and have begun to pick out the words and phrases best suited to my needs. The quality of these reductive spells is a akin to the waning moon, banishing and hiding things, and I can hardly wait to produce some of my own.

I woke up with a fever one morning, and came across the spell “ara liea” while reading.5  I quickly wrote it on a post-it, and said it once aloud.  As instructed, I repeated the long list of words from the Romanian spell twice more that day. Within 36 hours of beginning the spell, my fever subsided. While I also used some herbs and drank plenty of fluids, repeating the spell throughout the day and ensuring I had it “on my person,” as per the instructions, created a meditative effect in knowing the spell needed all day before it could begin to work.  I can see these spells helping medieval folks bide the time until the spell was complete before worrying further; it creates a mental boundary to allow the body enough time to heal.  The fever may have run its own course, but using the spell took my mind off of how long I was unwell. I imagine this would be a boon to many peoples of the past. Indeed, the dictionary provides an astonishing number of spells against fever and toothaches. One might conclude the abundance of these afflictions is evident through the demand for these spells. Lecouteux writes in the Preambulus that the spells included in the book are among the most popular found throughout history. He offers these only survived because of their effectiveness, necessitating someone passing them down as such.

In Lecouteux’s exploration of these ancient words, it becomes clear that magical traditions are undying. We can recognize our own needs and practices in the spells used in antiquity, and know that using whatever scraps of knowledge people have access to, the occult will rise again, and in new incarnations to best reflect the understanding that era’s magician-scholars can provide.  Despite this dedication, many words, phrases and instructions have been passed down incorrectly, or differently depending on the country where the original documents are found. Regional and temporal differences also influence how a spell is written or pronounced, how it is implemented and preserved.

Reading the Dictionary of Ancient Magic Words and Spells confirmed for me that despite the differences in time and place, there is consistence in our desire to create less suffering, protection, and to connect with the sense of power that magick helps us glimpse. Claude Lecouteux’s tone is easy to read and at times outright humorous, in that charming way that experts in a field they love tend to be.  I intend to seek out his other works, as I am certain he has taken the same great care in his research and writing of these other titles.