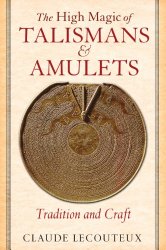 The first part of The High Magic of Talismans and Amulets goes into the traditions related to amulets and the natural magic thereof, and also examines the tension between established Christianity and the long-standing tradition of magick, especially of the apotropaic (evil averting) sort. One is strongly reminded of the generations of priestly execrations of goddess worship in the Bible, which similarly told us how long the practices persisted, and some details of them which we would not otherwise have had.

The priests inveighing against these charms were particularly intent on discouraging the use of magical characters (alphabetic or sigilic writing that conveys spiritual power). They sometimes waxed poetic: “The demon slithers in the characters like the serpent beneath the flowers.”1 This ties nicely into his statement that “the unknown always inspires the Church with fear.”2

Lecouteux summarizes part of this history thus: “Implicit in the background are notions of natural, licit magic and illicit black magic,” ((p. 30)) after giving one of many examples of a churchman condemning the talismanic art as being an implicit pact with a demon, a pattern which, as he points out, is “commonly repeated throughout the sixteenth century.” What this means to me is that the Faustian current which arose in early modern magick didn’t just appear without help. Apparently, it is as possible to call an egregore into being by constant execration as by constant evocation!

I went on an interesting research digression based on the mention of an apotropaic bronze grasshopper placed upon the Acropolis by Pisistratus as a charm against the evil eye.3 This reminded me of a similar grasshopper, the brass weathervane atop Faneuil Hall in Boston. However, the Boston sculpture seems to have hearkened back only to a similar weathervane atop the Royal Exchange building in London, which referenced the grasshopper on the Gresham family crest. It would be fascinating, if unlikely, to uncover any further connection.

This is a well-made hardcover with notes, a bibliography, and an index that are deep enough for a scholarly study. Other favourite highlights include the summary of the uses of the AGLA formula,4 and Chapter 4, which covers iatromathematics (astrological medicine) in enough detail to serve as a starting point for a professional study.

The summary of the talismanic art is broad, drawing on more sources than just Agrippa and The Picatrix. The book is illustrated throughout with line drawings from old sources, plus occasional tables, though the table of Lunar Mansions is cut off in the middle. That section of the book is cursory anyway: for practical work I refer to Agrippa, Nigel Jackson’s works, Stephen Skinner’s The Complete Magician’s Tables, and The Picatrix just for starters, plus some private materials.

The publisher clearly wanted to represent the book as a handbook for magicians: in the blurb on the dustjacket, Maja d’Aoust, the White Witch of L.A. and Librarian at the Philosophical Research Society, proclaims that “This is the only talisman book you will ever need.” Yet the only hints in the text of authorial intent to assist practitioners are a tacked-on appendix5 on consecrating magical objects, and one declaration in the text of “Now let us learn how to craft an amulet,”6 where the chapter that this introduces merely continues the recitation of historical examples. A review is no place for a practicum on the talismanic art,7 but I, for one, use many sources and will use this book more for background information.

Lecouteux gives a number of samples of astrological elections for talismans from The Picatrix, implying that they must be taken as is. One of the first things that a practitioner learns about the traditional sources is that they give very long lists of aspects desirable for each type of working, and anyone who is too literal-minded will never end up doing his or her first consecration, because all of the aspects taken together render the timing essentially impossible. For example, in Picatrix, Book I, Ch. 5: “Let this be done in the hour of Jupiter or Venus, with Caput Draconis rising, and with the Moon making a good aspect to Venus, and let the lord of the seventh house apply to the lord of the ascendant by a trine or sextile aspect.” Bonne chance! One needs a teacher and some experience to get a feeling for which aspects are most important so that some work can actually be done.

In quoting The Picatrix, I am surprised that the author’s scholarly eye did not pick out the awful jumble that is the languages and names referenced in the typical Picatrix invocation. For example, “I invoke you by all your names: that is, in Arabic, Zohara; in Latin, Venus; in Persian, Anyhyt[arguable]; in Roman, Affludita[sic]; in Greek, Admenita[sic]; in Indian, Sarca[sic – shukra in Hindi is closest].”8 I always correct these before use.

Even though the title states that this book is concerned with high magick, the author really never digs into the why of magick, or the theurgical virtues of working the planets. One can consult Israel Regardie‘s How to Make and Use Talismans [out of print but findable]) and Nigel Jackson’s Celestial Magic: Principles and Practices of the Talismanic Art for that. (It’s also in Picatrix and Agrippa, if you want to dig.)

The High Magic of Talismans and Amulets is well worth having for scholarly background, but may not serve as a handbook for the typical practitioner, who probably already owns the major source works anyway.