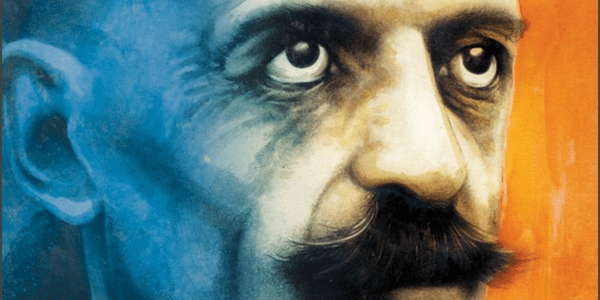 Some 15 years ago, I read what was apparently an autobiography by G. I. Gurdjieff – Meetings with Remarkable Men. As I recall, the book promised explanations of philosophy, great spiritual insight and, of course, remarkable men. I didn’t feel much wiser at the end of it, which is in no small part why I put up a hand to review Deconstructing Gurdjieff, hoping it would shed some light on that perplexing book.

It turns out that the known history of this self-proclaimed professor and esoteric master is patchy at best. He was born sometime in the 19th century, travelled some places (though maybe not as many as he claimed), and set up a number of teaching facilities for the harmonious development of man. He claimed to have occult powers, but also claimed to have been a sham esotericist to get into occult circles… Was he Greek, or Russian, or Armenian? People at the time seemed unsure, and the story never stayed straight. Was he really meeting people from ancient orders no one knew had really survived, or was he making a great deal up? Did he know amazing secrets that he coded into books and dances, or was he just playing with people’s credulity? We may never know.

What Gurdjieff said about himself and his history does not connect to all the available facts. Author Tobias Churton goes to some lengths to place Gurdjieff in his proper historical context, dealing with the relationship between deliberate myth making and possible reality. Inevitably, the process is patchy and speculative in places, but the author leaves you in no doubt as to when that is.

The book tends to assume that you already know something about Gurdjieff, but if you don’t, there are plenty of reasons to consider picking up a copy. Firstly, the author puts Gurdjieff’s ideas (at least, what we know of them) into the wider context of occult and philosophical thinking of the period. What’s especially exciting is that this is not a Eurocentric account; there are rich insights into Russian occult circles, Sufism, the fascinating culture of the Yezidis, insights into Theosophy, Freemasonry, and more. There’s a whole chapter about the relationship between Gurdjieff and Aleister Crowley which will be of particular interest to occultniks. You could read it just for the broad history of late 19th and early 20th century magick.

So, what do I know at the end of the autobiography that I didn’t know before? I know a lot about the historic and occult context for Gurdjieff’s life and work. I know bits of his autobiography and have a keen sense of him bumming around on trains, and a suspicion that his famous travels may have had political and business motivations, not spiritual ones. I know that he ran multiple schools, that he valued surprise as a teaching method and wanted people to wake up, but beyond that I have no real insight into what he stood for or taught, because that information remains elusive. In some ways this is frustrating, at the same time it validates my first reading encounter.

Gurdjieff’s life has a lot to show the modern reader about the issue of gurus. A charismatic man, and clearly a talented manipulator, Gurdjieff seems to have been a master of tantalizing people with mystery and magick, but not delivering anything they could work with. Disciples who come to believe in the message-bearer even when they can’t unravel the message may keep donating money, but it won’t avail them much for their own spiritual journey. Self-proclaimed spiritual teachers who are skilled self-promoters are not always the best people to learn from.

I can’t say I found this an easy read. Sections that delve into exactly who did what when — for example, the question of trying to pin down the year of Gurdjieff’s birth — were a bit of a slog, and not that exciting. Some of the asides to give historical context did very little for me, but that’s an entirely subjective judgement, and others may find those diversions to be valuable context or interesting in their own right. I enjoyed Deconstructing Gurdjieff most when the author speculated about events and circumstances. These were the most readable and engaging passages, with a distinctly different tone of voice to them.

Working between the myths and the facts, this book is also a really interesting exploration of how we retell our own stories for all kinds of reasons. The story Gurdjieff told of his life when he wished to appear as a capable businessman was greatly at odds with the story he told when offering a spiritual biography. It raises interesting questions about what we tell to whom, and why, and how we all recast our lives according to our current needs.

On the whole I found Deconstructing Gurdjieff an interesting read, and worth the effort in the sections I found more demanding. It has helpfully shed light on Meetings with Remarkable Men, and raised interesting questions for me about possible relationships between occultists and intelligence services. But no spoilers from me on that. If you want to know, you’ll have to pick up a copy! I can’t say this book is for everyone, but if these are your areas of interest, it is worth your time.