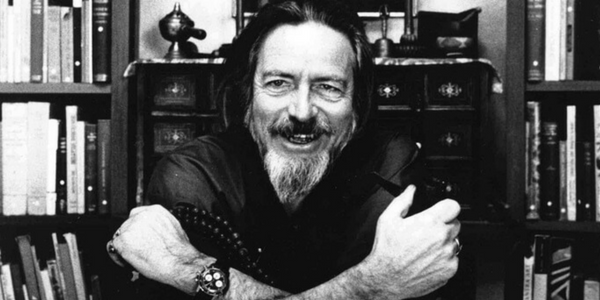 The Collected Letters of Alan Watts

Once upon a time there was a lunatic who used to pass the time by sitting in a corner and beating himself on the head with a brick. When asked the reason for this interesting behavior he replied, “Well, it feels so pleasant when I stop.” Very often the lunatic is nothing more than a caricature of people supposed to be sane; we call him a lunatic only because he expresses fundamental traits of human nature in the most obvious and concrete manner, whereas sane people carry on the same processes in more veiled and mysterious ways.1

Alan Watts (1915-1973), author of more than two dozen influential books, including The Way of Zen

, The Wisdom of Insecurity

, Become What You Are

, and Out of Your Mind

, was an acclaimed philosopher who helped bridge western culture and eastern consciousness. In a unique position of being a Zen Buddhist, ordained Episcopal priest, psychedelic advocate, and Guru, Alan Watts’ theological and philosophical insight spans the whole gamut of human nature, leading to his distinction as one of the greatest thought leaders of the 20th century. The Collected Letters of Alan Watts

, a compilation of his letters written between 1928 and 1973 and edited by his two eldest daughters, Joan and Anne Watts, is filled to the brim with thought-provoking revelations that he wrote to his dearest confidants over the course of his life.

The Collected Letters of Alan Watts offers very intimate insights into Watts’ life, as told by the man himself. Many of the letters include day-to-day happenings, providing the reader an intimate picture. The book is divided into nine sections representative of influential periods of Watts’ life. Each section has an overarching theme, yet the book remains flowing and sequential. The timeline provided through the chronological ordering of the letters gives the reader a chance to see the philosophical development of Watts as he was exposed to new ideas and concepts. Scattered within the letters are profound bits of wisdom that are the seeds of his great works. Very evident is Watts’ desire to share these insights with those closest to him.

Many of the letters contain Watts’ musings on Christianity in comparison to Buddhism, particularly during the sections where he attended seminary and became an ordained Episcopal priest. Buddhism remained at the root of his theological foundation from beginning to end. In this way, a fascinating perspective is brought forth as Watts moves through his own spirituality candidly and openly. In the end, he could not reconcile the two and split away from Christianity as his personal doctrine; yet the letters show what an impact his exploration had on his comprehensive understanding of theology. Halfway through the book, Watts’ interest in LSD is piqued, and his writing reflects this newfound understanding of the world. His career is in full blossom at this point, and Watts is lecturing and speaking around the world. An entire section is dedicated to his time working at the American Academy of Asian Studies. Finally, the letters progress to the time in Watts’ life where he becomes a guru, concluding his remarkable journey from the biographical standpoint of his correspondences.

While the entire book is filled with interesting personal reflections of Watts, a good amount of it is him giving details about his ordinary life to keep relatives in the loop. The majority of the letters are to “Mummy and Daddy,” who he devotionally maintained correspondence with, always keeping his parents up-to-date to bridge the physical distance between them. This includes personal events such as the birth of his children, moving, and visits from friends. At times Watts muses on his surroundings to give the recipient a sense of place, writing in one instance “there are hummingbirds here that are quite tame, and hover from flow to flower right under your nose, and last night I caught sight of a sphinx moth doing rounds in the garden”2. Also included are many letters to his wives — some love letters, some in regard to the dissolution of their relationships, as he had three wives throughout his life. Due to the intimate nature of the writing, the reader comes to know Watts as though he were a personal acquaintance and experience his life through the same lens he did.

The list of influential people Watts corresponds with in this book is quite impressive. Reading his letters with culture-changing thinkers, such as Carl Jung, Joseph Campbell, Timothy Leary, Christmas Humphreys, Gary Snyder and Aldous Huxley is like a sneak peak into the relationships he shared with them. Through these letters, an interweaving of Watts’s personal and professional life shows another side to the friendships he maintained.

Despite a life cut short due to alcoholism, Watts made quite a marked impact during his life. It is hard to deny the influence Watts’ legacy has contributed to expanding the consciousness of western culture. The Collected Letters of Alan Watts provides a lens for the reader to understand Watts as the man he truly was. For someone who had so much clout to flaunt, from academic success to international fame, these letters are a humbling reminder that Watts was a person just like everyone else — on a wild, exciting, and spiritual journey through life. I highly recommend this book to anyone who enjoys the work of Alan Watts and is interested in knowing more of his personal life and relationships, in very much detail. This compilation of his letters is truly a remarkable way to get to know him.