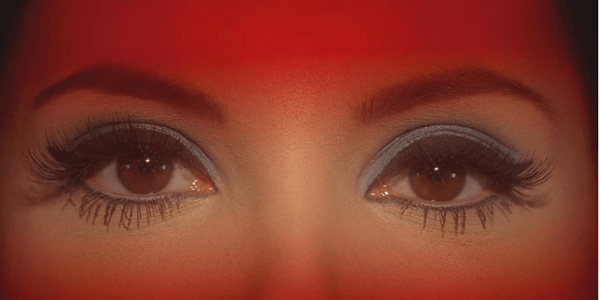 A glamorous witch, brewing love potions in her apartment.  Lantern-jawed police detectives, digging a witch bottle out of a grave. A sinister high priest, coaxing young girls into depravity. And a tea room as pink as Cupid’s bleeding candy heart. These are just some of the evocative, gorgeous, and eerie images in Anna Biller’s The Love Witch. 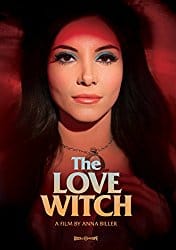 I watched The Love Witch back in December and was haunted by it for weeks afterward. The film is a lovingly crafted throwback to old exploitation films1 and eye-popping Technicolor visuals. If someone tossed the softcore arthouse erotica of Radley Metzger2 the hippie and drug-panic films of the ’60s, a dash of Alfred Hitchcock’s Vertigo, and a few Bewitched episodes into a blender, you’d end up with this heady, candy-coloured, and wonderfully strange cinematic elixir.

The Love Witch is the story of Elaine, a placid young woman searching for love in ways that go horribly wrong (her love spells have a pesky tendency to turn fatal). While clearly a work of fiction, the film depicts the occult in a way that feels lived-in and accurate. From the set design to the way Elaine’s coven behaves, The Love Witch feels like the work of someone who’s clearly read a Book of Shadows or two.

I reached out to filmmaker Anna Biller to talk to her about her interest in the occult, her cinematic influences, gender polarity, and the odd cases of synchronicity that popped up during her production.

Ashley Naftule: The first thing I wanted to ask you about was your research process for making The Love Witch. It really looked like you did your homework.

Anna Biller: I tried to do the kind of research that someone would do if they were going to be initiated as a witch. I read everything that I could get my hands on, so I’d really know. At one point, I thought of actually becoming an initiate! It was very time-consuming to do all that reading, and it took me a much longer time to write the script because I kept wanting to know more and needed more for the story.

Was there any particular occult tradition that you drew the most inspiration from, or were you inspired by a mix of different practices?

It was a little bit from multiple sources, but mainly it was Janet and Stewart Farrar, the Gardnerians, and a little bit of Alex Sanders.You’ll notice that there were two rituals in the film; one of them was a Gardnerian ritual, and the other was an Alexandrian one. Because of my own experience with covens, I’ve noticed that sometimes you’ll get a high priest and a high priestess who’ll come from different traditions. That was my thinking for Elaine’s coven — that the priest was Alexandrian and the priestess was Gardnerian and they’d do different rituals.

Were you able to observe or take part of any rituals as part of your research for the movie?

Yeah, I did — I went to some rituals. There are a lot of witches in Los Angeles, where I live, and I knew some witches already. It’s easy to get into rituals there. I also ended up casting a number of real witches as witches without realizing they were witches. I was just casting them to be extras in the coven scenes.

Yeah! A lot of the people in the witch’s circle scene, the nude people, were artist models. But it turns out that a lot of them were also actual practicing witches! 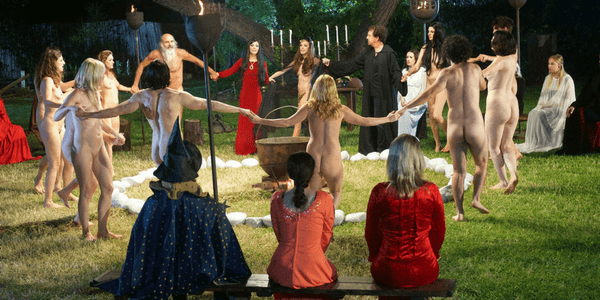 One of the things that struck me about your film was the extraordinary set design. The fact that one person wrote, shot, and designed this film boggles the mind. The level of detail in Elaine’s apartment — it’s such a beautiful creation.

That was important to me, to get the design to feel occult. The idea was that her apartment was originally owned by another witch, so she would have dictated what the design would be. In a film, many of your tools are visual tools, so if you want to say somebody’s a witch, you make their environment look like they’re a witch. Also, the witches I’ve known, they do work in really interesting environments. There are people who have whole apothecaries in their houses!

I’m a visual artist — I started out that way. My house is full of stuff for art-making, so I made a lot of the art in the spirit which I always make stuff for my films. It was really fun for me to make soaps, candles, little herb bags, voodoo dolls, and the rugs. That feels magical. I felt like part of being a witch is crafting your own objects, crafting your tools. There’s something magical in that, cause you put your spirit into it.

In the scene in the burlesque bar, where Elaine is talking to the coven leaders, it made me think of Anton LaVey’s The Satanic Witch. Just the way they talk about glamours and using sex as a form of manipulation felt very LaVey. Was that an influence on your script?

That part of the script does come from Anton LaVey; it’s also what I’m trying to say in the movie in general. I’m trying to talk about this kind of double-edged sword of sexuality and glamour for women. Witchcraft is all about gender polarity, especially in the Gardnerian tradition. Elaine’s whole problem is gender polarity; her whole problem is that she can’t make that work for herself.  She can’t get a man to balance her.

There’s something about the female polarity that doesn’t work in today’s world very well. People don’t respect it. There was something very sweet about the ’60s — it was the time of the sexual revolution, and people were trying to get gender polarity and sexual equality, but that revolution didn’t work out so well for women. It was a real tragedy that it didn’t because it ended up getting men even more power over women because now they had sexual power as well as social power over them. This is the second movie I’ve made about that subject!

I don’t know if you’ve read any of my reviews, but the critics are having a problem with gender polarity too. Even though the reviews are positive, they’re looking down on the sexuality of my films as something that’s kind of exploitative. That’s how difficult it is to get any kind of respect for female sexuality now- the fact that even if you put that as the content of your script, that it’ll get misunderstood,  even if you explicitly make the text about it.

The LaVey viewpoint you present is fascinating, because it comes from both a man and a woman in the film.

It’s interesting because it sounds one way coming out of the high priest’s mouth and another coming from the high priestess. When I wrote that part, I didn’t write it for any gender. What I did was break it up so they could take turns speaking.  So when he speaks, he sounds demonic, like he’s just trying to get girls and groom them for sex. And when she said it, it sounded empowering.

That’s a little bit of a problem with covens. You’ve got these innocent women coming into it, who are getting into it for spiritual reasons and not realizing there may be predators involved in that world. I was just trying to make it as realistic as possible in terms of what can happen. Because the way men are — if you’re dealing with female sexuality and you’re trying to make it equal and goddess-like and wonderful, but they’re naked and having sex there, they will get exploited because of the way men are. 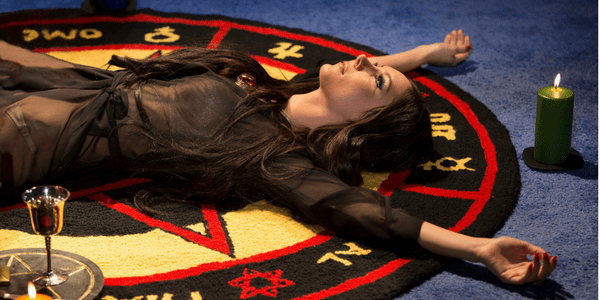 Reading some of the other interviews, you’ve done for this movie, I was surprised to hear that you didn’t intend to make the setting of the movie feel retro or ambiguous, regarding its time period. I was really surprised by that, cause watching the movie I felt like that timelessness was a very deliberate choice.

What happened was that I made a few other period films, and that’s how my style’s developed: to light and shoot things a certain way to create a period feeling. I tried not to do it this time, but I didn’t succeed. It’s partially because of the lighting that I like, which people just don’t use anymore: that hot, high-key lighting that makes it look like an older film. Even if you shot it digitally, it would look like an old film. ((Emma Myers, “The Love Witch Is a Seductive Revenge Movie for the Heartbroken.” Elle.com, 30 December 2016, and Samantha Robinson “I’m actually trying to create a film for women: Anna Biller on the Love Witch,” Filmmaker Magazine, 23 June 2016.))

I used new cars in the movie from the beginning, so I thought people would understand that it’s taking place now. But because we’re using rear-projection, high-key lighting, and the way the actors are using the space and how they speak… it reads as not being modern. 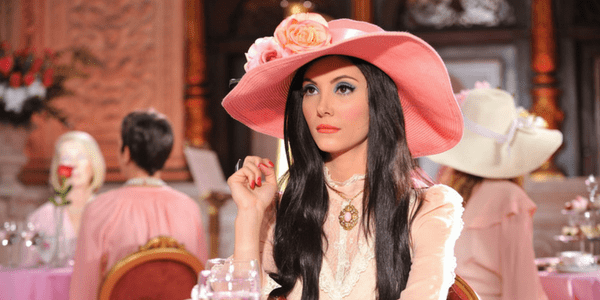 Speaking of the actors: They seemed to have a mannered, stilted way of talking. I don’t mean that in a bad way, though. The actor who played Griff seemed like he was straight out of a Dragnet rerun. Did you direct them to do that?

What’s weird is that was all in the casting. I just found these people – that’s how that guy actually is!

So, it was like a Robert Bresson thing, where they’re not acting so much as just being themselves?

That’s absolutely it. Isn’t it great? I didn’t train those actors. They read the script; I didn’t tell them anything about it being a period piece, I didn’t tell them about a style. That’s just who they are. ((Wikipedia, “Robert Bresson,” last updated 27 January 2017.))

Going back to the occult: I just have two more questions. I was wondering if occult filmmakers like Kenneth Anger or Maya Deren had any influence on your work?

Definitely Kenneth Anger. He was a big influence for the movie in terms of the visual world I was trying to create. I was trying to make it feel magical. His films are the only example I could find of magick just coming from the visuals itself, the feeling of magick being created in what you’re looking at.

In your past interviews, you talked about how you weren’t a magical practitioner before making The Love Witch, but how through your research and experiences you’ve come to become a part of that world. So I wanted to ask what your current experience with magick, and whether or not you’re still practicing.

Here’s the thing — I need to work a lot on myself.  What happened when I started doing spells was that they were all dark spells. The only time I felt the urge to do a spell was when it was a negative spell. So, until I can work on myself and do more positive energy spells… That’s where I gravitated towards – I think I’ve got a lot of anger and things that I need to work out. It feels like that magick put me in a dark place. In that sense, it makes me feel like Elaine. She’s trying to do these positive spells to gain love, but they’re really destructive spells because that’s what her energy really is.

For more information on where to see The Love Witch, see thelovewitch.oscilloscope.net.