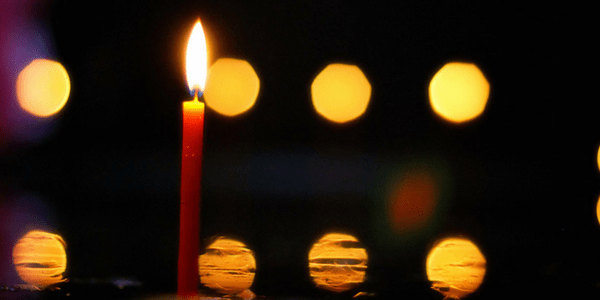 I’ve never been big on New Year’s resolutions. I tend to feel quiet and introspective during the winter season, not energized and itching to make big changes. In fact, I do a lot of meditating during the darker months of the year. So it was only natural, I suppose, that I’d end up creating my own version of the New Year’s resolution. My version doesn’t focus so much on outward change as on inward contemplation. And it lasts not just for a few days or weeks, but for the whole year.

It’s simple, really. Around the New Year, I choose a short saying, quote, or phrase. Those words will be my constant companions in contemplation for a full year. I keep them in my thoughts as much as possible. And I come back to them in a mindful way over the course of the next twelve months. This practice has unlocked a world of new ideas and new understanding for me.

I got started with this practice quite by accident. Many years ago, I spent some time studying Buddhism. A saying got stuck in my head, a sort of non-musical earworm: All life is one life. I had recently discovered the concept of meditating on a phrase instead of just a single-word mantra, so I decided to use this one. In my newbie eagerness, I also decided I should devote a whole year to it. Looking back, I realize that was probably an instance of biting off more than I could (or at least, should) chew.

That first year, I took my new practice very seriously. I didn’t just meditate on the phrase “All life is one life,” but also researched the idea itself. I discovered that all living things on earth contain DNA, from the smallest bacterium to the tallest redwood tree. Focusing on that phrase led me to take an herbalism workshop in which I learned to connect with plant spirits. It opened me to all kinds of synchronicities and revelations. I doubt I would have experienced them if I hadn’t been carrying that saying around with me, letting it float in the back of my mind all the time.

As that year neared its end, I reflected on my experience and decided it had been positive, even revelatory, and I wanted to do it again. So I opened myself to whatever the universe might offer as a phrase for the upcoming year. Lo and behold, one did indeed turn up, that year and every year since then. It’s always short and simple, nothing that will take any time to memorize, just a few words that encapsulate an idea, something to chew on and mull over.

Beginning in late November or early December, I purposely open myself up to a new saying for the upcoming year. There’s really no deadline, though. If you don’t get started until after New Year’s, that’s fine. That first year, I’m pretty sure it was mid-March when I chose “All life is one life.” Whenever you decide to do it is the right time.

To choose the saying of the year, I watch and listen for phrases that repeat in different venues in my life.  Sometimes I’ll hear something in a song, then a friend will toss it out in conversation. Maybe I’ll see it again in an article or a movie. When it comes to me over and over like that, I feel like the universe is tapping me on the shoulder, saying, “Here, this is the one.”

But sometimes I don’t get that shoulder tap. Sometimes I’ll get an earworm, like I did that first time. A phrase will get stuck in my head and won’t go away. This happens most often these days with sayings I’d rather not look at. Sometimes they make me uncomfortable. But I’ve learned to trust the process and allow the earworms to take their place.

In fact, last year my phrase was one like that. It wouldn’t leave me alone, even though I didn’t want it. So I grudgingly accepted it, and it has given me quite a philosophical and spiritual ride this year. The saying? “Born again, free from sin.” Yes, I live in the American South, a region we jokingly call “The buckle of the Bible belt.” This particular phrase made me really uncomfortable back in January. But over the past year it has led to some really powerful realizations about redemption, personal resurrection, and the very real need for the dying-and-reborn god in so many pantheons.

Some years, nothing comes. A few years ago, as I edged toward the end of December with no new saying in sight, I asked the readers of my blog to offer suggestions. Then I picked the winner out of a hat (actually, a shoebox, but you get the idea). That year, the winner was “Wherever you go, there you are.” My first thought was, Boy, this one is dopey and clichéd. But after a year of sitting with it, I had to admit to myself that I’m not always “there.” I’m not always present and mindful, but draining my energy and focus away to other places and times. That year, my saying popped up frequently in my mind when this was happening. It helped me to notice it and retrain myself  (to some extent, anyway) to be more present in whatever I’m doing.

Keeping it going for a year

How do I maintain a single phrase as a focus for a whole year? For the first week or two each year, I make a point of spending at least a few minutes each day thinking about my new saying. Sometimes I do this in formal meditation and sometimes just in quiet contemplation. That sort of rubs a groove in my mind so it’s easier to keep it going. After that, the days of purposeful meditation tend to spread out to one or two a week.

For the first little while, it usually feels like nothing is happening, like I’m not getting anywhere with my new phrase. But soon, I’ll find that it pops up in my head by itself, pointing things out to me as I go about my daily life. Sometimes the universe echoes the saying back to me in conversations with other people. I’ll hear it in music and see it in entertainment and books. Inevitably, I end up finding much more meaning than I thought the phrase could possibly hold. I gain new ways of looking at the world, new ways of being in the world.

I’m now on a quest for this year’s saying. I’m waiting for the universe to point me toward another phrase for another year. I’m sure something will turn up. It will probably be something I didn’t expect that will offer me a fresh perspective on some aspect of life. And that’s always worth the effort.

Will you try a saying for the new year?