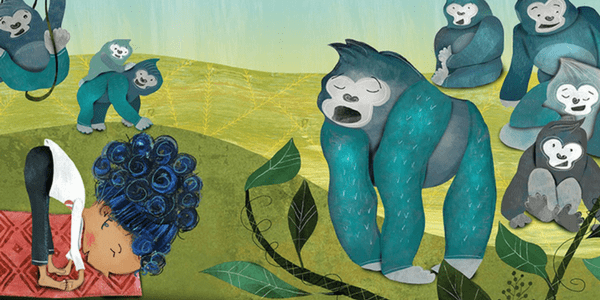 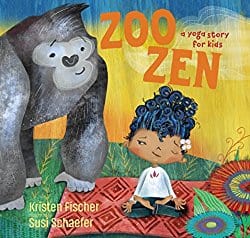 Children’s literature has been in the news lately due to its lack of diversity. I was so excited to get Zoo Zen: A Yoga Story for Kids written by Kristen Fisher and illustrated by Susi Schaefer because it does add diversity to the world of children’s lit, and talks about physical movement in a completely nonjudgmental way.

The main character of the book is a female presenting child of colour named Lyla. The story is very simple, it follows her as she, with her imagination, practices various yoga moves with her animal friends. If you are familiar with yoga practice, then you know that many of the poses are named for animals. In the text, Lyla goes through a few of the common ones such as eagle, camel, and lizard.

The book is written in a playful, simple rhyme that relates her movements to what the animal in the situation may be doing. There are also helpful comments from the animals such as “It’s ok to bend your knees” when she in a forward fold. I chuckled at this, because I say this all the time to my own students.

The illustrations are bright and colourful without being overwhelming. You can clearly see what Lyla is doing, as well as how the poses look in the animals she is mimicking. There’s a lot of space in these illustrations, which is nice as you can focus completely on one thing, instead of fluttering between images.

In the back of the book all of the poses are explained, so that children (and adults) can practice on their own. This explanation is simple and — along with the images — they are very easy to follow. The book also shares some simple ideas of mindfulness and being present, both commonly thought of as part of a yogic practice. These concepts are made simple for children to grasp.

What I really liked about Zoo Zen was that it shared joy in physical movement with absolutely no moralizing. There was no talk of how we have to be healthy or grow big and strong. There was no weight talk, there was no shaming of different abilities or any allusions that this was something that you had to do perfectly. A book that discusses physical movement just for the sake of doing so is so rare to find so this was a major high point in this book.

My only real issue with this text had to do with the flow at the end. What you’re reading in the book is Lyla’s flow, which is to say, a yoga sequence. There is no warm up and there is no cool down. The flow starts with a rather difficult pose and, although they are not all hard poses, generally speaking, there should be some warm up before getting into any of these.

Most children of the age group this book is aimed at (4-8 years) can pop in and out of these poses with ease. This is not the case for every child though. Although there were some helpful adjustments given throughout the text such as cues to stack joints and release tension, there were no variations or suggestions given to make this more accessible.

This is a children’s picture book, however, so there was really only so much they could do with the attention spans of their readers. I recognize this, and I don’t think that this makes it worth missing out on. This is just something to be mindful of, especially if your child has mobility issues. Luckily, there are many resources out there with variations of these common poses.

Over all, Zoo Zen was lovely. It adds so much to the world of children’s literature and is a great addition to homes where mindfulness and yoga are important. Worth the read either with family or for children to read alone.