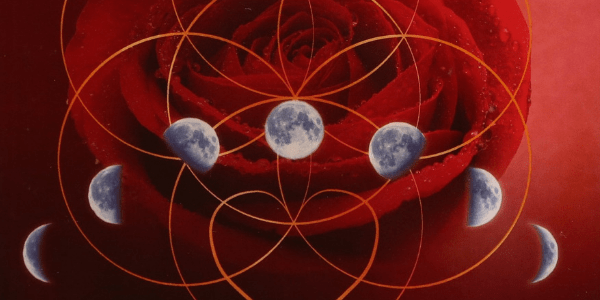 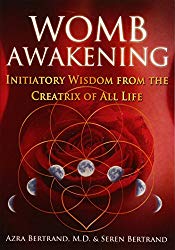 It took me an entire summer to make my way through Womb Awakening: Initiatory Wisdom From the Creatrix of All Life by Azra Bertrand and Seren Bertrand. I cannot bring myself to describe this book as anything short of life changing. Slowly and steadily, Womb Awakening gave way to a profound shift in how I view cosmology, my body, and spiritual traditions. This is a wonderfully comprehensive and paradigm-shifting book of knowledge that brings back to life ancient womb mysteries, long forgotten in modern times.

At more than 500 pages, Womb Awakening takes the reader through seven cycles. Each cycle is divided into chapters, titled “Spirals.” The Spirals begin with a poem and end with “Womb Oracle Shares,” which are real life testimonials of the experience of womb reconnection. Scattered through each Spiral are exercises for the reader to practice. Together, the information and the exercises provided allow for a personal journey into the mysteries of feminine spirituality, bringing to life the powerful practices of shamanic women.

The material covered in this book is comprehensive and spans a large gamete, ranging from the psychic dimension of lunar cycles to the redemption of lust. Through it all, Womb Awakening flows with ease and magnificently weaves together the myriad of content presented. The basis of the book is centred upon the concept of female shamanism in which the womb serves as a multi-dimensional spiritual black hole through time and space. As the womb is the gateway between life and death, it holds the potential to bring heaven to Earth. Tracing the feminine mysteries through time, the Bertrands reincarnate spiritual traditions of Womb Priestess that honored menstruation, pregnancy and sexuality as sacred.

Science, psychology, and spirituality are merged as Womb Awakening. Through the book, Azra Bertrand’s background as a doctor comes through in the text. One example is the description of fetal development through gestation in utero. By explaining the process of how a baby’s body develops, the concept of womb consciousness emerges to demonstrate the impact of in utero experience, where babies live in dreamtime reality. There is a radical revisiting of psychology to truly examine the function of our brains. The writing indicates we are connected to the subconscious realm through the cerebellum, which is “the home of our primal, feminine consciousness and dreamtime of the ancients.”1

Our solar-focused world has forgotten and forbidden all memories of the mysterious womb realm of shining darkness that every human was created in- but these memories live on, now stored in a place we call the “unconscious.” The magical lunar waters of our feminine time in the womb, and the Womb Consciousness it is generated by, become the dark, disturbing, shadow waters of the lost feminine soul, where our inner monsters and demons lurk, and where our inner treasures call us.2

The authors put forth that it is a practice of conscious conception and birthing that holds the power to change the Earth. As more women connect consciously with the power they hold in creating life within their womb, women will begin to be more aware of the unconscious ancestral trauma that is genetically passed down during gestation. The relationship to the placenta, power of the womb, and birth techniques in modern medical practice can be renewed from ancient wisdom to bring a sense of safety, spirituality, and love into a child’s life, from the time of conception through birth.

I appreciated this insight because I have a strong interest in pregnancy, birth, and midwifery. I became a doula a few years back because I wanted to have a hands-on method for shifting birth practices to be more conducive to a woman’s psyche. For too long, I feel birth practices have eschewed incorporating a spiritual dimension. Womb Awakening revitalizes the practice of honouring the placenta, umbilical cords, mother’s milk, and womb as connections to Gaia. The Bertrands write, “The sacred placenta itself is often identified with the tree of life, axis mundi, or omphalos. It is always a portal or interface between this world and the otherworld, from the child’s consciousness to the mother consciousness that created it.”3 I deeply appreciate the way the authors look to ancient practices, such as the ancient Egyptian honouring of the placenta, in order to re-envision modern birthing practices as akin to re-establishing a spiritual connection to the divine mother, or Gaia wisdom.

Another fascinating idea explored in Womb Awakening that had a profound impact on me was the way the author’s explore spirituality in a way that descends, down into the physicality of being — a more feminine mode — compared to traditional patriarchal religions, which focus on ascension or moving out of the body. The authors provide information on the twin spiral chakra system of Grail tradition, which different than the usual Vedic chakra system many people today are primarily familiar with. It is explained that this chakra system is based on “principles of spiral and sacred duality, or sacred marriage.”4 This system was a key piece of feminine mysteries. It is based on uniting the upper half and lower half of the body, the masculine and feminine energy within, and the right and left sides of us.

I began doing my own physical exercises based on the practices in the book, and I  consciously felt into different body parts. I realized that I had a lot of trouble sending energy down to my lower half — my legs would feel numb, tingly or stuck. With the assistance of the suggestions in the book, I began to reawaken descending kundalini. This practice shifted the way I felt both in my body and connected to the Earth. I realized how much resistance I felt being fully embodied and claiming my space. I started to notice a shift in my sense of abundance and prosperity because as I did this practice consciously; I began to feel more connected to and supported by the physical plane and my feelings of wealth reflected the shift. I had not realized that by unconsciously trying to transcend my body and the Earth, as Womb Awakening describes, “so often our spiritual paths advocate a transcendence or ascension, helping us rise away from our bodies, our feelings, our Earth self, our feminine self.”5

During this time, I also started to feel a whole new sense of pride in my menstrual flow. The Bertrands write about menstrual mystics, who used menstrual blood mixed with herbs to alter consciousness and gain wisdom. These blood-shamans were the spiritual initiators and the female body was perceived as having powers of healing. They write, “We see the power of menstrual blood was held as the pinnacle of Holy Communion, and originally associated with Magdalene and Sophia (feminine wisdom, wise blood) as the gateway to God.”6 What is fantastic about the book is the way it is linked to modern medicine. Stem cells have incredible medicinal properties, such as “the ability to be transferred to anyone with being rejected.”7 The concepts presented in Womb Awakening are truly captivating, because the link between past and present in constant reinforced by the ancient wisdom and the modern science, allowing both the mystic and skeptic to come together in understanding.

The only section I was somewhat dismayed by was the one of sacred union. The path of twin flames, a popular and often misused concept, which depicts the other half of one’s soul in another. I myself have studied twin flame unions since 2011, and I can’t say I entirely disagree with their statement that “Twin flames are the bridge to the birthing of a new earth.”8 Yet, I remain hesitant because I feel there is a lot of misuse of the term. I feel the split between the masculine and feminine is more of an internal split calling for reuniting, such as the right and left sides of ourselves, or upper and lower half, rather than a physical union between a man and a woman. At least, the Bertrands do not insist this union must be gendered, and is more of a magnetic counterpart.

I find it worth noting, while Womb Awakening is dedicated to reclaiming and remembering the power of feminine mystery traditions, especially that of woman womb shamans, it is not an exclusive read for women alone. I feel men would have much to gain through reading this book as well and the authors, one of whom is a male, do a great job at explaining how this wisdom is applicable to men as well. There is an interesting section on how men’s hormones follow a 30-day path, similar to women’s menstrual cycle.

I have read a multitude of books about divine feminine spirituality, the Grail mystery tradition, and women’s mysteries and I can say with confidence Womb Awakening is the most impactful and comprehensive book released to date. This review hardly taps into all the potent wisdom contained within the pages — I didn’t even mention the Bertrand’s writing on the feminine third eye, located on the back of the neck! Womb Awakening is capable of initiating one into an entirely new frame of mind. I highly recommend this book to anyone interested in female shamanism, divine feminine spirituality, or a reawakening of the deep gnosis held in the body of a woman.