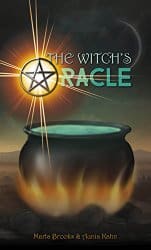 Divination tools, be they card decks, runes, or pendulums, carry a certain resonance that an astute reader will feel as soon as they look at them, or hold them in their hand. This is largely how they decide to work with a particular tool. And so it was when I received The Witch’s Oracle.

As I opened the postal carton and looked at the box, it felt to me like Samhain. The box and the cards themselves are dark, velvety and deep, and reminded me of the richness of the traditional regalia witches wear on that sabbat. The red and black brocade card back becomes iridescent as the angle of light hitting it changes: quite stunning.

Card illustrations by Aunia Kahn are simple but not simplistic, depicting witch’s tools, symbols, and real and mythical beasts. Even if the cards were not labelled, you would not have to guess what they represent. The brocade used on the card back, in different colours, is used as background for some of the cards and works beautifully.

The box has a pull tab so there’s no struggling to open it, and the cards are small enough for easy shuffling. The booklet, with text by Marla Brooks, is small as well, as is the type size, which should have been bigger. Most of the pages have abundant white space, enough that some of it could have been used for easier reading.

The booklet contains sections on clearing, consecrating and charging the deck; how to work with the deck, including a couple of simple spreads; and card meanings. The latter is broken up into some background about the card’s symbol, the meaning of the card and a rhyming incantation to activate its energy. All sections were short, but enough to get some insight into the significance of each card drawn in a reading.

To test the deck I drew a single card, Skull, with the meaning of “carpe diem” and a reminder to not overlook the simple things in life. True enough for me right now, and a reminder I’ve received through other divination methods.

I also used the Witch’s Broom spread — a modified past, present, future spread — to explore the cards further. I drew Dreamcatcher to represent me; Spider to represent challenges I face; Owl to represent opportunities; and Triple Goddess, Ankh, and Chinese Dragon to represent the past, present, and future, respectively. The meanings of the individual cards relative to their positions — especially the Ankh card, representing the present — and the reading as a whole made sense to me.

The Witch’s Oracle is a good solid deck for beginners, either to the Craft or to working with cards. The cards are a fun way to learn about some classic witch symbolism and tools, just enough to whet one’s appetite to learn more from other sources. They’re straightforward enough and the spreads basic enough that someone just learning how to piece together a reading can receive useful information. And they’re pleasing to look at, with a real feeling of magick.

For someone serious about both the Wiccan path and card divination, I’d suggest starting with The Witch’s Oracle and then moving on to The Wicca Deck,1 which I previously reviewed. Between these two decks, one can gain a great grounding for further work with more intricate divination.