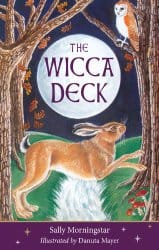 When The Wicca Deck came up for review I was excited to put in my bid for it. I’ve worked with tarot and oracle decks for about a decade, but never one based on my own spiritual path. The Wicca Deck is a 42-card oracle deck originally published by Godsfield Press in Great Britain in 2001 and republished this year by Connections, also from Great Britain. Some key elements account for its staying power.

First, the illustrations are simple, cleanly drawn and easily relate to their titles and keywords, reminiscent of the Rider-Waite-Smith tarot. There is some abstract art in the cards, but card themes are always easy to detect; this is perhaps because the artist, Danuta Mayer, illustrates children’s books, which usually depict real, basic objects. The clarity works well in this deck. The nature of the Wiccan path is diverse; every practitioner has a slightly different vision, and by keeping visuals straightforward one is invited to see the cards in her own way.

As you’d expect, the artistic interpretations are clearly Wiccan: The Green Man is depicted as the classic face on a tree, Spiral is depicted as the spiral goddess, Black Cat (my favourite) depicts a cat in an Egyptian temple, taking her rightful place as the goddess Bast. One image struck me, though, as rather Judeo-Christian, that of the Serpent (keyword Power) which depicts the Garden of Eden scene: a man and a woman standing next to a tree with a serpent coiled around it, all of whom are gazing at an apple half. The serpent’s traditional association with power and kundalini energy (as stated in the instructional booklet) is clear from the card title, yet I wonder why Mayer chose to illustrate that concept that way. From a Wiccan viewpoint, I feel it detracts from the card’s usefulness.

The instructional booklet, written by hedge witch Sally Morningstar, explains the traditional meaning of the symbols or how ritual objects are used in practice, then gives intuitive meanings for each. Also included for each card are its vibration; keywords; and a “high note” and a “low note,” akin to the upright and reversed meanings for tarot cards. She describes them as a vibrational scale on which users would find themselves, and be able to use the guidance accordingly. Frankly, I did not find the two notes so different in most cards; they could have been omitted or simply incorporated into the general meanings of the cards.

Part Two is a guide to working with the cards and offers spreads such as the Quick-Question, the Star, and Ascension. I used each of these spreads and was impressed with their accuracy and guidance, especially for the Star spread. This is a seven-card spread that associates each card with the astrological meanings of the sun, moon, or planets Mercury, Venus, Mars, Saturn and Jupiter.  Morningstar writes that the Star provides a “deep reading, and should not be used more than twice a year,” and I agree with her. I would recommend a reading around Samhain and Beltane, or two of the other sabbats that hold special meaning for you.

Aside from the spreads given in the book, I could easily see these cards used for meditation, either on Morningstar’s themes and thoughts or on your own. Most cards would work superbly in casting spells because of their clear images–there is even a delightful card called Spell (keyword Enchantment) with a fairy and a rainbow and lots of greenery.

Overall, I was pleased with the basic Wiccan themes of the deck and Morningstar’s creativeness in interpreting them. I even learned something new in the Holey Stone card (keyword Protection), also known as a Hag Stone, which she describes as a powerful goddess symbol that can be worn around the neck to ward off evil and remove obstacles to success. Thanks to The Wicca Deck, I see a spell and a new necklace coming on!