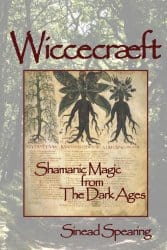 Over years of discussion with family members and other initiates, I have come to the conclusion that perhaps the biggest problems faced by members of non-Abrahamic faiths is not opposition (both from within their own movements and from without), but the language we use to express ourselves. That is apparent twice within the title of this book. “Wiccecraeft” is bound to both confuse people (did the author mean Wicca craft or witchcraft?) and turn people away (if it is about Wicca, then witches won’t look at it, and if it is about witchcraft, then Wiccans might spurn it). Looked at another way, however, it is obviously intended to make people stop and think about the subject.

The second sticking point is the “shamanic magic” referenced in the subtitle. Purists will insist that shamans only exist with the extreme northern reaches of the inhabited work. There are other words to describe indigenous religious practitioners from other regions. “Shaman,” however, has been used within the academic community in such a non-specific way for decades, so its use is probably guaranteed for the foreseeable future.

The introduction serves to clear up any misunderstandings concerning the use of the word shaman, although the perceived differences between Wicca and witchcraft are not really addressed. Spearing makes it clear that she is aware of the fact that our perception of the world is very different from that experienced by our ancestors. While we may acknowledge this on some levels, it does not make it easy to shift to a more primitive perception.

Meditations and exercises are provided to help facilitate this altering of perception, but it is, ultimately, up to the individual to make the experience their own.

This book has been padded a bit by the inclusion of quotations, spells and remedies in the original Old English as well as the modern English translations. Quite honestly, I can’t imagine that there are too many people who are going to be making the effort, even though a five page appendix is provided to start you on your way to reading and speaking Old English.

The book is broken down into six sections, three of which deal with specific activities which are of interest to the practitioner: Healing, Divination and Prophecy, and Shapeshifting. There is an introductory chapter dealing with the Otherworld and the Alchemical Imagination, which helps to set the stage for altering your perceptions of the world around us, and there are two final chapters dealing with a semi-fictional “Initiation Diary of a Shamanic Witch,” and a wrap-up chapter which covers the inexorable nature of fate.

This book has a lot to offer. While I don’t think it is necessary for everyone to read it, it does offer a great deal of insight into the thinking of our ancestors. Many modern followers of Wicca could benefit from such a perspective.

As well as presenting ancestral views, there are some speculations regarding more modern developments. It is the contention of the author that religion has attached itself to witchcraft, but is not an integral part of it since the roots of witchcraft are shamanic, and thus existed a priori to religion. She feels that, if Gerald Gardner was doing his work today, he would emphasize the shamanic aspects and downplay the religious orientation he gave to modern witchcraft. She accepts the idea that individuals who belong to religious groups are able able to combine those religious thoughts with witchcraft (thus accepting the concept of Christian witches, Jewish witches, Muslim witches, etc.), while admitting that this is a fairly controversial subject.

So, if you think you would benefit from a very different view; if you are willing to challenge your own perceptions; if you are (in other words) open-minded, you will find this book intriguing and well worth the time and energy involved in reading and experiencing it. Challenge yourself.