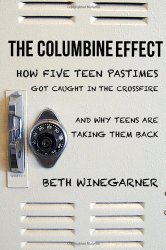 Every generation of teenagers has grown a little wilder and a little more transgressive as society becomes increasingly complex. Teenagers are attempting to find themselves and a supportive peer group while navigating a society that is more socially active and integrated on levels we have never experienced before. Beth Winegarner writes a thought-provoking and well-researched piece highlighting teenage angst and shedding light on some of the occult practices that have been tarnished by bad media coverage on the heels of incidents like the Columbine shooting.

When the Columbine shootings occurred there was a competitive media frenzy that led to significant misinformation about the culprits, citing heavy metal music and musicians like Marilyn Manson as influences. There has been an element of this blame-shifting present in each school shooting and social tragedy since Colombine. If a pentagram was found in a culprit’s bedroom or adorning their school binder, then ideas of Satan worship and dark powers have been brought to the forefront as causation, often overshadowing the more realistic factors of personal loss, loneliness and depression. Because of media coverage like this occult practices have become synonymous with dark practices, and are surrounded by fear.

Winegarner addresses the faulty media coverage and explores the damage it is doing to the public’s impression of alternative lifestyle choices, such as teen involvement with Gothic subcultures, heavy metal music, role-playing games, Satanism, and Wicca, which can act as a lifeline to teenagers who are not able to or interested in assimilating with mainstream society. She delves into the history of these practices and not only explains their origins, but cites research and ideas that highlight the benefits of being involved in such tribes. For instance, though Goth originated as a music movement in London in the 1980s, the term reaches back to 18th and 19th century gothic literature authors like Edgar Allan Poe and Lord Byron. The clothing and costume-like make up reveals a group of marginalized teenagers who identify their dark clothing as a shield of armour from a world that has already shunned them from the mainstream.

The information about role-playing games is fascinating, and as a reader and non-gamer, I feel like I’ve missed out. You can be anyone you want to be! Who doesn’t want to escape their stresses and be someone else from time to time — teenagers and adults alike, especially if everyone is on a level playing field. These games teach people to work together to solve problems, as the studies would suggest.

Winegarner explains some of the practices and traditions behind many mystical religions around the world including shamanism, Santeria or Lucumi, Vodou, medicine men and priests. It’s a very insightful book, illuminating a number of different spiritual practices that exist, and offers a good lesson in viewing them with an open heart and an open mind.

It is also a great book for parents who have teenagers that might be delving into an occult practice. It gives tips in dealing with these decisions and highlights the dangers of lack of communication between people which can lead to alienation within the family.

Most importantly the book sheds light on what has been perceived as darkness, pointing out that the most dangerous part of any occult practice is the lack of knowledge that causes fear of the unknown. The Columbine Effect is a great step in the direction of educating the public that have been fed unnecessary gross untruths by the media.