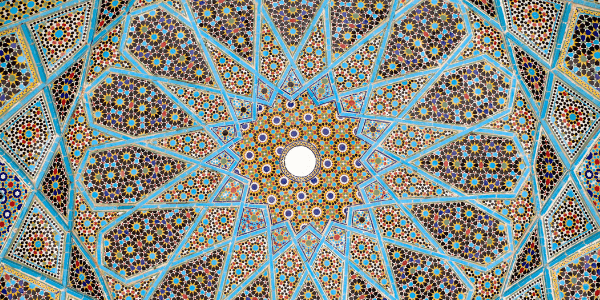 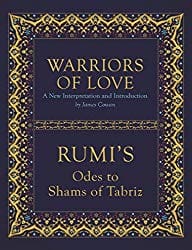 In Warriors of Love: Rumi’s Odes to Shams of Tabriz, Rumi attempts to translate dance into poetry: the process of transcendence by abandoning the self into song. As a (much lesser) dancer-poet, I have turned choreographic notes into verse and continually try to record the ecstasies of music-inspired movement.

While both Barks and Cowan rely, in varying degrees, on Reynold Nicholson’s English translation of Rumi, they take different approaches to stanzas and rhythm. Barks cites Walt Whitman and Wallace Stevens as influences;1 Cowan breaks “the odes [to Shams] into their original beyts or couplets”2 and makes no attempt to translate line-for-line. For example, Cowan’s first translation begins:

Barks translates the same line as:

Love comes with a knife, not some
shy question, and not with fears
for its reputation!4

Reading both versions makes the connection between “modesty” and “reputation” explicit; Barks offers the knife, while Cowan commands it be used. This kind of comparison feels like it works the same brain muscles as rephrasing my own lines of poetry or helping another poet else rephrase theirs. So, I highly recommend reading both Barks and Cowan (and other translators of Rumi).

While I did enjoy many of Cowan’s interpretations of Rumi, I enjoyed much less of his 85-page introduction and accompanying five pages of notes. This is a small edition, about 5.5 square inches, so his introductory pages don’t contain as many words as the average 8.5 x 5.5 inch book, but the introductory material is almost as long as the retranslated poems.

In the first half of the book, Cowan provides some good context and biographical information for Rumi’s odes, highlighting the essential role Shams of Tabriz, Rumi’s cherished mentor, played in his life.

I’ve always pictured Rumi and Sham like Achilles and Patroclus — as lovers in the physical as well as spiritual sense. As a bisexual woman, my default assumption for all other humans is that they could be any sexuality (and my default hope for everyone is that they are bi or pan).

However, Cowan insists on friendship, and only friendship, between Rumi and Shams. He uses a number of comparisons to Western literary characters, poets, and artists. While some comparisons are useful, others portray male-male relationships that were known to include homosexual activities, such as Verlaine and Rimbaud, as “ruining the sense of freedom”5 found in fraternal male-male friendships, such as between Vincent Van Gogh and his brother, and in Dante and Beatrice’s heterosexual relationship.

I’ll mention one or two points
Translating the language of whirling!
When you enter the dance
You then leave both these worlds.6

One probably wouldn’t want to model their romantic or platonic relationships on the Verlaine-Rimbaud fiasco, and Cowan does not explicitly acknowledge that these men had sex, but using the most notoriously queer example as the negative in his equation is kind of problematic.

Beyond queer politics, a complete denial of any sexual relationship between Rumi and Shams is problematic, because it does not take into consideration how Rumi (and other Sufis) inspired a long tradition of love lyrics travelling through roaming troubadours, Marie de Champange’s court of love, Shakespeare’s stage, and into modern poetry. Consider how Rumi uses the eyes:

My heart’s eye longs to see you unceasingly.
Oh how this need feeds my heart and eye!7

And I am sick when I look not on you.8

Furthermore, Cowan uses male-gendered nouns and pronouns (e.g. “the rendering of Spirit as word, divine and unalloyed, the language of men as angels”9 and “the poet thinks his way into Being”10) throughout the introduction, which seems rather outdated for a book published in 2017. There is a moment where he inserts a parenthetical nod to the other gender: “Why should we toss aside all the accoutrements of being a man (or woman)…”11 which I could spend several paragraphs unpacking. Overall, Cowan’s avoidance of gender-neutral pronouns is probably going to distract anyone with even a baseline awareness of feminism.

However, his introduction does highlight some of the important spiritual messages found in Rumi’s poetry: “the religion of love transcends doctrinal frontiers”12, ecstatic dance (“serna”) is the “noblest of all intoxications” and leads to “the final abysm of Love itself”13, and one should prioritize the quest for a burning union of the lover and the Beloved. A taste of some burning words from Rumi:

The tip of his curl says, ‘Ha! Off to rope-dancing.’
The candle of his cheek says, ‘Show me a moth to burn.’
O heart, stop dancing on that rope, become a hoop instead;
Throw yourself against the flame when his candle is lit.
Once you’ve known the rapture of burning, you’ll never survive without his flame;
If the water of life should douse you, his flame will dry your spirit.14

I will always advocate for reading more Rumi: rereading, reading different translations, reading in different languages if you are a polyglot. James Cowan’s English-to-English versification of Warriors of Love is worth checking out, but I’d suggest skipping much of his introduction; try some ecstatic dance instead. I even have a trance dance book to recommend: Trance Dancing with the Jinn by Yasmin Henkesh.15