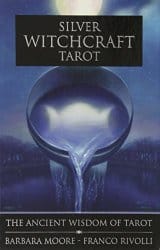 Illustrated by Franco Rivolli, The Silver Witchcraft Tarot is a Pagan deck that focuses on the cycle of the year and feminine energies. It draws upon traditional Rider-Waite-Smith Tarot (RWS) imagery as well as nature-based “magickal spiritual understanding,” says Barbara Moore.1

When opening the deck for the first time, its most striking features are the silver gilded edges and vibrant colours. The cards are easy to shuffle, riffling showcases the beautiful gilt edging, and the cardstock feels sturdy, but not too thick. The large box that houses the cards and booklet shows off the prettiest card in the deck, the Ace of Cups, and is great for storage, but a bit cumbersome for travel.

The softening of some imagery — like Death — makes this an excellent deck for fun, lighthearted events. However, the move away from skeletons and towards butterflies in Trump XIII seems to ignore the artistic traditions of the dance macabre and memento mori (which have been used for centuries to understand death as a part of life), but can also obscure magical traditions surrounding death (such as death midwifery). So, while the Silver Witchcraft Tarot is “designed to resonate with magickal practitioners,”2 it may not offer the full spectrum of energies.

Throughout the trumps, Christian iconography from the Rider-Waite-Smith deck is replaced with images from nature. For instance, the Devil card includes a dead tree in a mirror that is chained to a white cube, somewhat similar to the mirrors in the Tyldwick Tarot. This shift in iconography makes it a good deck for witches who are not interested in working with Biblical allusions.

The trumps also use vibrant, almost ombré, background colours to indicate three spheres of existence: the Material Sphere is seen in yellows and blues, the Immaterial or Intellectual Sphere in purples and blues, and the Spiritual or Divine Sphere in pinks and purples.3 This division of the trumps into three lines of seven cards — with the Fool outside the lines — is common in tarot books like Rachel Pollack’s 78 Degrees of Wisdom, and Rivolli’s colour scheme makes this structure more apparent.

In the suit cards, the pip cards are explicitly connected with Pagan holidays; the twos represent Yule, the threes Imbolc, and so on with the nines as Samhain (the ones and tens are the self and universe, respectively). This connection with the Wheel of the Year helps with timing in readings and reflects many literary works on witchcraft, such as Patricia Monaghan’s Seasons of the Witch.

However, some of the connections with Pagan holidays clash with traditional RWS imagery as well as keywords included in Moore’s text. For example, I tried the Sabbat Spread from her booklet when preparing for Beltane. My theme card — drawn from the fives, which represent Beltane — was the Five of Pentacles. I don’t associate Beltane with the keyword “poverty”4 or with the traditional RWS snow, but I do associate it with the nakedness and fertility that is shown in Rivolli’s art, as depicted by a young and old woman disrobing, accompanied by a bunny.

In addition to using the sabbats to organize the suit cards, this deck does not always include traditional suit markers. Each of the suits is given a silvery image: Cups are Silver Moons, Pentacles are Silver Threads, Swords are Silver Wings, and Wands are Silver Flames. While the associations here — such as replacing cups with a moon to invoke intuition and emotions — can foster a deeper understanding, sometimes these silver symbols feel redundant. For instance, each Pentacle card includes at least one pentacle with silver threads.

Because the number of symbols does not always match the number on the cards, this deck feels distant from fortune telling with playing cards. My grandmother read with only playing cards, and my mother reads with only tarot cards, so I personally tend to prefer decks that draw from both traditions. But readers who don’t have an emotional or intellectual interest in the playing card tradition probably won’t be bothered by this artistic interpretation, and may prefer the silver images.

Alongside these silvery additions, there are animals associated with the suits, such as the aforementioned bunnies in Pentacles and cats in Wands, yet it seems striking that the cat in the Queen of Wands — based on Smith’s cat Snuffles in the RWS deck — is omitted here. These animals add to the natural or Pagan feel of the deck by drawing on the idea of a witch’s familiar.

Silver Witchcraft Tarot features people who are ethnically diverse, and tends to favour dark-haired women, which makes it great for people of colour — both readers and clients who want to see themselves reflected in the cards.

Overall, this deck is excellent for festivals, parties, and card-of-the-day readings. However, I think it can be a little unbalanced for dark spiritual or psychological work (such as Jungian shadow work or death midwifery) — the softening of some imagery gives it a light feeling, and does not offer the reader many paths through darkness. As a witch, I appreciate the silvery Pagan feel of Moore and Rivolli’s cards.