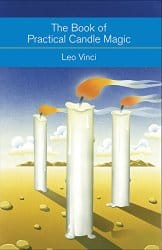 The Book of Practical Candle Magic has practical information that I found useful. It’s hard to recommend whole heartedly as it does read like a volume from another era of occult literature. After all, it was originally published in 1981, with no updates for contemporary readers. I admit I was quite confused by the many references to Biblical and Old Testament figures and accouterments recommended for incorporation into ritual, but the information is good and well presented. To illustrate, Vinci uses the signifiers “he/him/his” universally, which reminds the reader continually that the book is not contemporary, and that female and gender non-conforming people aren’t being addressed.  Perhaps this could have been updated so as not to alienate non-male identified readers.

It’s a slim volume that includes a lot of detail about candle mythology, history of use, and use of candles for divination. It goes on to describe how one might make their own candles, and describes the different types for ritual use — altar candles, zodiac candles and offertory candles. It’s unlikely that someone would find the book useful as a resource on how to make candles. The information presented seems simultaneously too detailed for the lay reader, and likely not sufficiently detailed for a candle maker. A description of how to dress candles with different oils in preparation for ritual use was interesting; a simple concept with some subtleties and different processes for different types of rituals. Those directions are well addressed, simple and straight forward.

Leo Vinci incorporates interesting elements into candle use in ritual: angelic, planetary and astrological correspondences that magicians from many traditions would find adaptable into their practice. Colour is discussed at length with respect to aesthetics and symbolism, and included as an appendix. Colours are discussed according to positive and negative attributes and associations, including planetary. There are only a handful of rituals documented for the reader to try, but the principles of candle layout and use are such that the reader is empowered to create lots of other rituals. Vinci discusses the idea that candle magick is thought of as low magick by some practitioners perhaps due to its simplicity, for Vinci (and for myself) this simplicity is one of its great strengths.

There is a notable and pervasive use of Judeo-Christian imagery in the book which may be problematic for some readers. In addition to references to the Talmud, the Old Testament and references to “God,” it also incorporates psalms that practitioners might adapt to their ritual practice. In researching the author online, I learned only that he is an “experienced occultist.” He’s published two other volumes that concern angelic or Enochian magick (Gmicalzoma: An Enochian Dictionary) and a book about Pan. The inclusion of so much Christian imagery is distracting for sure, and it may have been helpful to contextualize it as part of traditional ceremonial magick.

There are other elements that gave me pause. His altar schema includes a New Testament Bible, and there is an odd warning against magick on the “left hand path.”  To quote, “What advice do we give to would-be followers of the Lefthand Path? That’s simple — don’t take it!”1 He goes on to warn the reader off this “unwholesome and contaminating subject.” It struck me as a product of the 1980s (which is when the book was originally published), and appears to be an artifact of the Satanic Panic days. This detracted from my enjoyment of the book only a little, it’s a minor detail but seemed patronizing to this reader.

Even with these issues, I liked The Book of Practical Candle Magic. It’s a short volume that speaks authoritatively on a fairly narrow subject. Every book is published in a particular time, and although things have change quite a bit in common understandings of things like gender identity or the left hand path, I found it to be still quite useful.