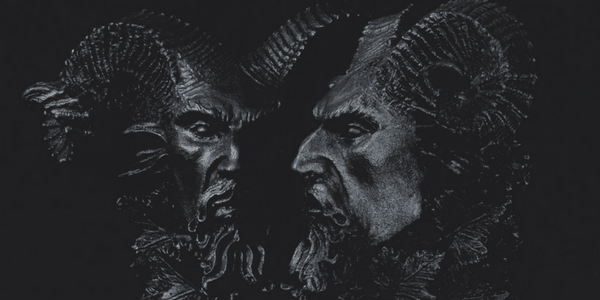 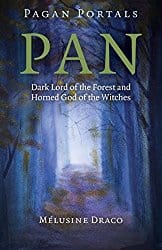 Over the past few months, I have been very interested in learning more about the history of Pan and his different manifestations. So, when I first saw the cover of Pan: Dark Lord of the Forest and Horned God of the Witches by Melusine Draco, I knew I had to read it.

This book is a journey through time. It begins with a discussion on how the Horned God was portrayed in ancient times and in different belief systems, primarily the ancient Greek religion and mythology. The “Homeric Hymn to Pan XIX” is included, and it tells of Pan’s attributes and how he came to be. The text then goes on to explain how Pan has a dark side, and that with the onset of Christianity, Pan became the Devil.

Pan was also identified with Faunus in Rome, where Paganism was outlawed in 365 CE. All the temples to the gods were shut down, and Pagans were persecuted for over two centuries. Although certain individuals may try to erase a religion, it is impossible to totally wipe it out of existence. This is evident in how many drawings of Pan have been found in caves, including statues of him, a sign of continued worship and belief.

A fun part of the book is when the writer talks about Pan in his role as a playmate. She draws the reader in, as she describes Pan’s dark energy when he shows up in the woods. I identified with this because when I was a child, a neighbour and I used to play in my backyard with a spirit, in a similar way as she described “playing” with Pan. Looking back, I am quite sure that the spirit we were interacting with was Pan, a very playful, trickster personality.

Chapter Five is called “God of the Witches” and begins by talking about Aradia, a book otherwise known as The Gospel of the Witches, compiled by Charles Godfrey Leland and published in 1899.1 We go on to read how Lucifer  and Satan are also Pan, because he appears in different forms to different people and this will often depend on culture, location, and the person’s religious background. He may appear as Lucifer to those who are seeking wisdom and knowledge, those who might be of a “lighter” nature or who might need self-empowerment in their lives. In this instance, the person will feel a warmth or peaceful energy and a greater desire to better themselves. For those who might have a Christian or Catholic background, he may appear as Satan, as he is the adversary of that religion and that is what they are familiar with. They may need to be freed from oppression and might feel a darker, fierce, protective, and powerful energy from him.

As a Satanist, I am glad that this was included in the book, as these days the idea seems to be anathema to many Pagans and witches.

He is fiercely protective towards his followers and, unlike many other focus of worship, will come when called upon.2

When I read this, it gave me chills. I have said this very thing about Satan. He protects his own, and I have seen it first hand in my own life and in the lives of others. When you call upon him, you don’t need fancy ritual items and you don’t have to use intelligent sounding words. If you are genuine and you call him, he will come.

Draco sums up the book with the following words:

For Pan is all things to all who follow him — from the laughing pastoral deity to Pan Pangenetor, the cosmic All-Begetter. For all his complexity, however, once we’ve encountered Pan in his natural environment, our own response will probably be the same as that endearing little rodent from The Wind in the Willows: ‘Afraid! Of Him? Oh, never, never! And yet — and yet — I am afraid!’3

Pan is a true god, and for many — the only God.

At the end of each chapter, there is a magical exercise that gives the reader a practical way of implementing some of what they learned. These include prayers to say to Pan, invocations, offerings to give him, how to make a protective circle around one’s home and ask Pan for his blessing, how to make Four Thieves Vinegar —  a potion for the prevention of illness, the banishing of troublesome people, personal protection, and the cursing of one’s enemies.4 The final and most powerful is taken from Aleister Crowley’s “Hymn to Pan,” which instructs on how to manifest Pan’s presence in your life.

Throughout the book, there are references to many different sources relating to Pan, including Meriem Clay-Egerton from the Coven of Scales; Margaret Murray, the author of The God of the Witches; Patricia Merivale, the author of Pan the Goat-God: His Myth in Modern Times; and Aleister Crowley.

I enjoyed reading about Pan’s history and how people have given homage to him through prayer and hymns. I liked that Melusine Draco included excerpts from writings from different time periods and sources, yet I wish she would have shared more about her personal experiences with Pan.

Pan: Dark Lord of the Forest and Horned God of the Witches is a great book for any devotee of Pan, and for those who are interested in learning about him. Pan is much, much more that meets the eye, and Melusine Draco brings him to life, making the reader feel a close connection with him.