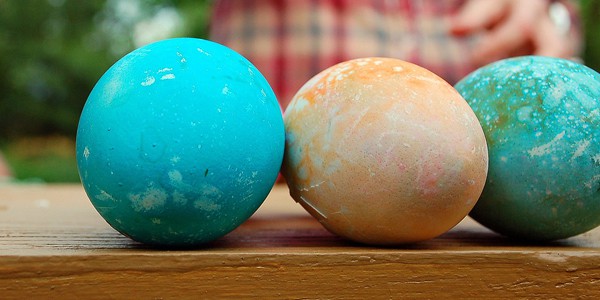 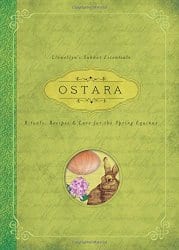 Ostara: Rituals, Recipes & Lore for the Spring Equinox by Kerri Connor is the very first book in Llewellyn’s successful Sabbat Essentials series, and the book that set the standard for the other seven in design and format. With easy-to-reference (now standard) sections of: Old Ways, New Ways, Spells and Divination, Recipes and Crafts, Prayers and Invocations, Rituals of Celebration, and Correspondences for Ostara, this little book is accessible and useful to both beginners and long-time practitioners.

With Imbolc, the Earth flutters awake with the smallest of shrugs, even under the thickest blankets of snow. It sets life in motion once again, paving the way for Ostara. In this book, Kerri Connor presents a plethora of fascinating facts, crafts, recipes, and rituals for celebrating Ostara.

So, really, what is Ostara? Also known as the vernal equinox, Ostara falls on or around March 20 in the northern hemisphere and “marks when the sun hits its zenith” which happens worldwide at the same time.1 It’s a time when daylight and darkness are more or less equal, though it varies depending on where one lives in relation to the equator.2

Ostara, a celebration which takes its name from the goddess Eostre, is a time of fertility, rebirth, renewal, resurrection — ancient concepts directly tied into the season, and, because of their universal resonance, folded into Christianity which also appropriated her name. But, says Connor, “there is truly little information about her.”3 The first mention of Eostre as a goddess was by Bede, a Northumbrian monk in 725 CE in his work A Reckoning of Time. According to Bede, during Eosturmonap (the equivalent of April), “the Pagans celebrated Eostre with feasts before the Christian holiday of Easter came into existence.”4

The origins of Eostre herself are murky. Some think her to be a Celtic goddess. Others claim her a Germanic deity. Unlike other goddesses and gods, there are few tales featuring the goddess Eostre. However, a modern story (based on a Ukranian folktale that explains the origin of pysanky) tells the story of how Eostre saved a dying bird’s life by changing it into a hare. But the transformation didn’t happen completely, so the bird — who now resembled a hare — still possessed the ability to lay eggs. Because the hare was so grateful to Eostre for saving her life, she decorated the eggs and gave them to Eostre as gifts.5

Connor provides a timeline of connection between Eostre and hares which is fascinating.6 Further, she explains that in reality Ostara, as a holiday, is not an ancient one, but a modern interpretation of an ancient seasonal celebration.7 Regardless of that, Eostre continues to be a symbol of spring and an expression of rebirth.

As a celebration of the resurgence of life and resurrection of the light, people and cultures all over the world, from ancient to modern times, have basked in the lengthening of daylight. Mayans celebrated the spring equinox at El Castillo in Mexico, with the “Return of the Sun Serpent.”8 Other ancient sites of interest marking the equinox mentioned are Angkor Wat in Cambodia, Mnajdra in Malta, and Fernacre Stone Circle in Cornwall.

In the United States, in the New England states of Vermont and New Hampshire, old stone structures mark the sun rises of the equinoxes and solstices at Calendar One in Vermont, and Mystery Hill, “America’s Stonehenge,” in Salem, New Hampshire. Some attribute the construction of these monuments to Native Americans, while others think them built by ancient Celts (based on Irish Hinge Ogham found at Calendar One). New Mexico and Virginia also have ancient sites commemorating the sun’s journey.9

Because the themes of rebirth, renewal, resurrection, and life are so powerful, Ostara and the spring equinox are intimately related to other holidays as well. Of course, there is the Christian Easter celebration and the Jewish Passover holiday. But there are others, such as the Druids who celebrated Alban Eiler (translated as “Light of the Earth), the Roman Bacchanalia, and the Greek Dionysia.10. One of my favorites is the Persian Nowruz, which in Farsi translates into “New Day.” Before the rise of Islam in Persia (now Iran), Zoroastrianism was the religion, and Nowruz was celebrated as a holy day as well as the new year. Today, it’s celebrated as a holy day by some (for example, Sufi Muslims), but for many in Iran, Afghanistan, and Turkey it’s celebrated as a secular holiday and the official start of the new year.11 As someone who is blessed to have friends and family possessing different backgrounds and beliefs (many of who are of Persian ancestry), I’ve incorporated many of the Nowruz traditions into my own celebration. Many of the symbolic items for Nowruz: apples, lighted candles, mirrors, decorated eggs, and rosewater resonate with my personal celebration of Ostara.

What about the deities signifying spring? Goddesses associated with these celebrations include Aphrodite, Venus, Clytie, Eos (the Greek goddess of the dawn), the Roman flower goddess Flora, Gaia the Earth Mother, Norse Freya, and of course, Cybele the Great Mother.

Though perhaps the most well-known goddesses associated with the return of life and spring are Persephone and her mother Demeter. When Persephone, kidnapped by Hades to rule as queen of the underworld, disappeared, mother Demeter mourned her so deeply that she did not tend to the crops. Fearing starvation for the world, Zeus, although complicit in Persephone’s abduction by his silence, sent Hermes to bargain with Hades. Although he agreed to allow Persephone to return to Demeter, he offered her a parting gift: a pomegranate. Forever bound to him and the place after eating pomegranate seeds, Persephone returns to him for the number of months equal to the amount of seeds eaten (some say six, others four). During the time Persephone rules in the underworld, the world plunges into winter, devoid of any growth. But upon her ascent to the upper world? Demeter rejoices with blooming flowers and green.

Gods associated with Ostara include Dionysus, the Celtic Cerunnos (the Earth Father)12, Irish Dagda and his son Aengus MacOg (both known as gods of regeneration), the Green Man, the Welsh Mabon, Pan, and, of course, the Egyptian god Osiris, who was resurrected by Isis.

Connor does a great job of recounting the pastel colours of spring, like violet, pink, green, yellow, blue, and white,  and spring symbols such as the phoenix which resurrects itself from flames and death into a new life, the butterfly and its amazing process of transformation, the lamb, honey and bees (oh, and the exquisite honey cake recipe on page 96 is yummy — try it!), birds, maple syrup, rabbits which are symbols of fertility, and, naturally, chickens and eggs.

The author explores egg lore and uses throughout the book (within the New Ways section, Recipes and Crafts section, Spells and Divination section), many of which were new to me! For example, the cascarone.13 Quite simply, it’s a blown-out egg refilled with something else (in the Crafts section, instructions are given for filling them with glitter and other things). Because blowing out the eggs can be a messy and time-consuming task, one can use papier-mache cascarones. After filling them with glitter, confetti, or whatever else deemed appropriate for the intended blessing, the crafter decorates them with paint, stickers or crayon. As Connor mentions, “if it doesn’t turn out too great, it doesn’t matter — you’re going to smash them anyway!”14. What I love about the cascarone is the idea it bestows blessings upon whomever it breaks upon. It’s a manifestation of a targeted blessing, and, at least for me, it shows someone how much you care about them. I’ll be trying these out – but taking the papier-mache route!

What else does Connor present with regard to eggs? Egg races, egg “jarping,” egg dancing, egg hunts, egg coloring, blessing eggs (akin to cascarones, but different), and egg cleansings and divination.15 She also offers a cute idea for gifts or for your altar: eggshell plant pots.16 Yes, they’re adorable and beautiful and once the plants get too big, you can plant them outside.

Two of the other craft ideas offered are painted garden stones17 and Ostara terrariums.18 With regard to the latter, the terrarium is crafted from old books. Detailed instructions are provided, along with a drawing of the outcome. Exquisite in execution, the terrarium makes for a unique gift and altar addition. Given time, this is one of those projects I’d like to try.

Ostara is about rebirth and regeneration, transforming the old and tired into something new and vibrant. Whether this pertains to old ideas or ventures or other aspects of life, Ostara is the opportunity to sweep away what no longer serves, plant something new, and grow. Connor’s prose about spring cleaning popularity, reinventing things and ideas, cultivating a new life or relationship are hopeful and profound.19

As with each spoke on the wheel, life is about change. Change is difficult, and probably gets the greatest of resistance from us. A beautiful spell entitled “Spell to Assist in Difficult Changes”20 is offered. “While Ostara is about new beginnings, sometimes starting over is one of the hardest things we can ever imagine doing,” says the author.21 We resist change, whether we know it’s for our own good or otherwise. Changes shock us out of our comfort zone, and I found that the act of reading this spell (initially) inspired a shift. Whether it’s balance or beginnings we seek, Connor creates beautiful meditations for both22 with her meditations and prayers section.

For me, both the vernal and autumnal equinoxes are favourites. They represent balance and transition, circumstances shifting into something new, whether rebirth for spring or introspection for autumn. This year, I feel it more than ever and, as someone experiencing a metamorphosis in thought and life, a simple guide is appreciated. In Ostara: Rituals, Recipes & Lore for the Spring Equinox, I found that. Kerri Connor crafts a fresh presence, presenting fun yet profound information, spells and meditations, crafts, and recipes. A great guide to celebrating Ostara.