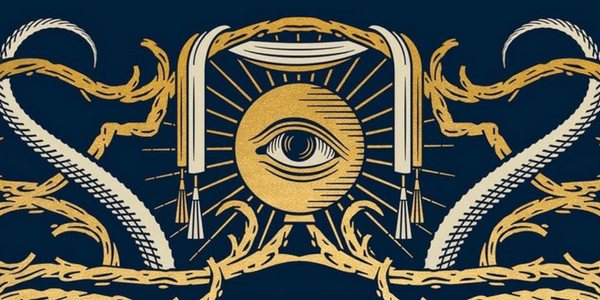 The Occult Book: A Chronological Journey from Alchemy to Wicca

, isn’t quite what I expected, but I can file it under “happy surprises” on my bookshelf. I must first acknowledge what a lovely volume it is. The publisher is Sterling, and the book is of beautiful quality — from the navy cover with embossed metallic gold designs, to the proliferation of artwork within and the satisfyingly heavy paper — it’s a delight to handle and read.

This is great news, as it turns out this book is something of a reference, and something you will want to have around for years. I picked it up expecting a narrative chronology, perhaps something of a history or nonfiction book about the evolution of western occult thinking. Instead, it provides a chronology of occult philosophy from the sixth century BCE through to 2012, comprising a hundred historical snapshots of moments critical to occult thinking. Starting with ancient Greece, Greer walks us through every major moment relevant to esoteric and occult knowledge. It’s wonderful to see such disparate elements — the death of Jesus, the birth of the Knights Templar, Nostradamus, the Rosicrucians, Freemasonry, spiritualism and theosophy, through western esotericism and the evolution of the influences that would eventually consolidate into Wicca — all in one volume.

Each of the hundred topics has a two-page spread: an image of the person, place, event, document or phenomena; and a one-page description and discussion of the topic. It’s a neat and elegant layout, and the full-colour pages of artwork make it a pleasure to read. Of course, with a volume of this scope and scale, readers will encounter topics for which they will desire further reading recommendations. Greer has included a “Notes and References” section at the end, where he has selected one or two sources that the reader might turn to for expanded reading on the subjects. This is such a valuable resource; I absolutely love a well-considered recommended reading list. Finally, the index at the end will also guide readers’ exploration of this expansive book.

Greer has accomplished a remarkable feat with The Occult Book, consolidating as he has an enormous proliferation of knowledge, texts and notable figures over millennia, and in organizing a multiplicity of sometimes interrelated occult traditions. It’s satisfying to just see it all in one place! It’s also a wonderful resource that allows the reader to read a single page on each topic heading — something of a thumbnail sketch that gives the reader a concise springboard from which to learn more about a particular topic of interest or one that is relevant to his or her occult practice. The scholarship of the project is also really amazing, and the writing is clear and authoritative.

John Michael Greer is the author of a number of books about western esotericism, his name likely familiar to anyone who has done much reading on western esotericism and general occult and magick topics. He’s the author of more than 40 books. Notably, he authored The New Encyclopedia of the Occult (2003), and initially I wondered if The Occult Book wasn’t an update on that volume, but after researching his encyclopedia, they seem to be separate projects entirely.1

The Occult Book organizes topics chronologically, which makes for an interesting exploration of the ways that various traditions expanded and branched off into different directions. I like also that he explores people, places, notable documents and also historical events in his timeline — this demonstrates the various and complex ways that occult traditions are disseminated and gain traction over time and across cultures. It’s a satisfying book — you get the sense that it’s a reliable and authentic text that manages to consider and organize complex traditions and themes. Again, it’s worth noting that it’s not the sort of book one sits down and reads cover to cover. You’re much more likely to pick it up over and over, for reference or to dip into a particular occult epoch. It would also be a great book to guide more in-depth study.

In addition to being a prolific writer and public figure in modern American Druidry (including the Druidical Order of the Golden Dawn, which he founded), Greer maintains an active blog at ecosophia.net. The Occult Book would be a solid and desirable addition to any occult library. I’m really delighted with it, and look forward to further exploration of it in years to come!