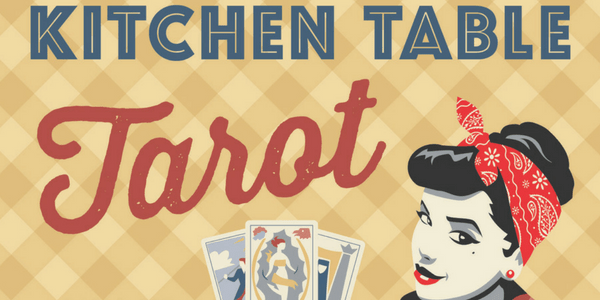 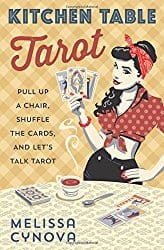 Tarot cards should be approachable to anyone curious about a deck of colorful images that show what could be. Kitchen Table Tarot: Pull Up a Chair, Shuffle the Cards, and Let’s Talk Tarot by Melissa Cynova gives people a chance to learn about the cards without stressing about using the guide book when reading for friends. Cynova explains that the cards function more like guidelines than rules when showing what’s ahead. They can’t make things better or fix problems, but they can give options and advice.

Through the book, not only does Cynova talk about the breakdown of each card, she also goes over the practical use of tarot cards for any reader. She describes how tarot cards came into her life, literally falling into her lap due to a school friend. Cynova even shows the trip-ups she has had over the years of learning, indicating that learning how to read tarot cards was not a fast and easy process. This shows that everyone starts as a beginner.

As she states at the beginning, reading Kitchen Table Tarot should feel like old friends sitting down with coffee and chatting on a Saturday morning. That is just where the book has sprung from — teaching friends at her house and her blog, Little Fox Tarot, over the years and compiling all the information into one book. Though I have been reading tarot cards for over ten years, Cynova’s writing was a refreshing and even introduced new ideas to apply to my own readings. She does talk extensively about the various clients she had over the years and how not all are sunshine and rainbows. The big takeaway is that you need to find your strengths in Tarot reading and that it is okay to say no. A reader, the title Cynova uses instead of Tarot reader or psychic, does not have to read for every person who asks. If you don’t feel comfortable or have no energy, it is perfectly fine to past on reading for someone. You are not the coin operated oracle at Coney Island for anyone who wants to know their love life.

Like many other tarot books, Kitchen Table Tarot does have break down of the major and minor arcana and tries to show how to group them together by the elements and suits for easier memorization, though it is never frowned on to have the guidebook close at hand. The explanation for the cards both upright and reverse shows that it is never a simple positive or negative view. Each description is simple and to the point, while still leaving room for personal interpretation.

A good example of how Cynova gives a different take on the interpretation of the cards is her description of the Hierophant. This is a religious card that has been difficult for me to understand, but Cynova shows that this figure is similar to the trickster, and describes they keys in the imagery as showing a choice that can be made, if you’re willing. She writes, “The Trickster is the messenger between the gods and man. Stealing fire, teaching us forbidden secrets, giving us an apple. The Hierophant is the go-between for the gods and man, just as coyote stole fire. In order to make the unattainable ours, risks are taken.”1 This gives me a whole different view of a figure that always seemed more like a depiction of strict, organized religion.

Cynova gives guidelines for each card and points out the small details in them that I had previously missed. She writes how even the background holds just as much information as the main character of the card. This helps form a complete story when you’re reading just one card, or a whole spread like the Celtic Cross.

The big debate brought up towards the end of this book is whether or not to charge for readings. Cynova notes  that she does tarot readings to make a living. Since the locals don’t bring food and repair the roof, she needs to be compensated for her time. It’s one thing do this as a hobby for yourself and friends, it’s another if you want to make a living out of it. Now, the pricing scale is up to the reader. This is a topic not often approached in tarot books, and it may even be skirted around. The view of charging might seem taboo for tarot readers, psychics, or mediums, but if the reader wants to go beyond reading for themselves, this is something for them to think about. It also adds one doesn’t have to haggle — set your prices and stick to them.

Kitchen Table Tarot is for the beginner who wants to dip their toes in the tarot world for fun and personal study. The cover of the book is light and cute, which may throw off some readers, but it fits perfectly with the theme of the book as a whole. This is a book to read more then once, and it can be referred back to often. It’s also useful for intermittent and advanced readers as well, if they want a lighter read on tarot cards, and something to recommend to friends when they see their first shiny new deck. Of course, don’t touch it without asking!