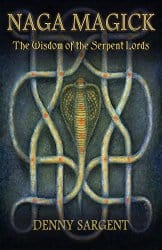 Naga Magick is an interesting find on many levels. Denny Sargent has written an erudite and fascinating glimpse into a world at once mysterious and paradoxical.

Naga Magick began life as a research project which then blossomed into this book. As a practicing tantric and historian, Denny Sargent can speak with authority about these mysterious and powerful serpent entities who have been the object of veneration for millennia in India and other parts of Asia. Serpents as an archetype and reality arouse both fear and awe in humans, they haunt the depths of our subconscious and manifest in many areas of human culture; a relic, perhaps, of a primeval fear from our ancient past.

At the very centre of the mythos surrounding the naga is the natural world: a place vast, beautiful, and luminous. As such, nagas serve as the guardians and protectors, and are fittingly ancient beings instilled with great wisdom and unimaginable power. Tibetan Buddhists see them as healers of the land and waters, able to cleanse and purify all that has been despoiled, and maintain the natural world. If this natural world is to be sustained in a pure state for all beings to inhabit, the naga must be approached in all humility, prayers offered and rituals performed to ask for their help. Collaboration and respect is the name of the game here.

Naga is a Sanskrit term meaning “one who slithers on the ground” or “one without legs.” They are strange beings who can take on the appearance of snake, human or a fusion of both. They are capable of healing as well as killing — always this duality! Their presence is strong in aquatic environments, be they oceans, springs, lakes and rivers. There always seems to be an element of chthonic energy about them. As well as a protective function they also have a connection to wealth, be it material or metaphysical and fertility. They are revered within Buddhism as well as deeply connected with Shiva, Shakti, and Ganeshe. The focus of the book is mainly India and Pakistan but the presence of the naga is noted within China and Japan. Here the serpents are transformed in flying serpents — dragons.

We are introduced to eight main naga lords and their homeland, Bhogavati. The naga arch nemesis, Garuda makes an important appearance as do the four Guardians of the Cosmos. Regarding practical matters, Denny Sargent has provided a detailed exposition on ritual, shrines, breathwork (pranayama), ritual gestures (mudras), images (murtis), offerings, and mantras. He has also expressed plainly his bias towards Tantric practice and all that it entails. The advice given to the would-be practitioner is common sense, backed up by good resources, both in print and on the Internet.

Naga Magick follows a ritualistic structure, culminating in the Grand Naga Puja, which draws together the information provided and allows the invocation of the eight main naga lords. The extensive use of Sanskrit terms throughout the book may make for difficult reading at times, though there is good reason for their use. A glossary has been helpfully provided to allow the reader to navigate the landscape before them, and it would be a good idea to use it. This is not a magical text for beginners, but more suitable for experienced practitioners, and interested academics

The naga have become part of Sargent’s ritual and meditative life over time, to that end he has endeavoured to “reconstruct a magickal tradition.” It has been a challenging journey though, as there has been a dearth of historical information. Despite such obstacles, he has produced a detailed and practical manual. Such work, he hopes, will benefit academics and sincere seekers who wish to work with these beings. A courageous undertaking one might say, it also ensures that knowledge pertaining to these entities is preserved for future generations.