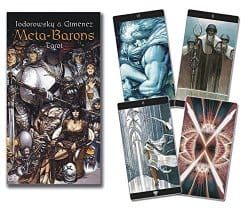 For those unfamiliar, the Metabarons is a science fiction comic written by Alejandro Jodorowsky and illustrated by Juan Giménez, which spanned from 1981 until the story ended in 2003. The comics have been called a “space opera” and are akin to Greek tragedies in theme and scale. The Metabarons in the stories are men, each compromised by injuries inflicted by their fathers; and compensated for by technology, such as bionics, cybernetics, robotic limbs, etc.

In each narrative, the Metabaron must conquer his father to achieve succession, following Bushido, a traditional Japanese code of “victory or death.” The stories are akin to the hero’s journey, and in that sense are adaptable to the traditional narrative of the tarot cards in the conventional Rider-Waite-Smith deck, in which the Fool sets out to learn lessons of life through the minor and major arcana.

Both the Meta-Barons Tarot and traditional tarot use the arc of life lessons to structure card meanings. However, unlike the Rider-Waite-Smith deck, the Meta-Baron narrative is neither necessarily intuitive, nor is it explained in this deck or the accompanying booklet, even in rudimentary terms. The use of this deck is dependent on the reader having two specialized schools of knowledge: the Metabarons iconography, and the minor and major arcana of a traditional tarot deck. If either of these are missing, I suspect the utility of the deck would be compromised. For that reason, I would recommend it for a Jodorowsky or Giménez or Metabarons fanatic, or the collector, or perhaps to augment the use of other decks.

The accompanying booklet really doesn’t assist the reader much; it’s a card-sized, 62 page paper document, which includes instructions in five languages: English, Italian, Spanish, French, and Dutch. The multilingual aspect is great, but it means that the reader has only 12 scant pages of information about the cards. The minor arcana in particular gets very little information concerning it.

There is one suggested card spread included, the Test of the Warrior. It’s a standard spread using four cards to represent problem, querent, strengths, and outcome or future. Of course, any favoured spread could also be used. I used the deck a few times with the Test of the Warrior spread and a Celtic Cross spread. My issue with my readings is predictable — it’s hard for me to feel a connection to these cards. The imagery is unfamiliar (I had read some of Humanoids, the series that followed Metabarons), and needing to refer to the booklet felt cumbersome.

The cards are on the smaller side, 66 x 120 mm which makes handling them easy, and they are great quality cards, coated for gloss and ease of handling, and flexible. They come in a small box with no information aside from their title and author, artist, and publisher credits, with the small paper booklet enclosed.

The artwork is reprinted from the existing Metabarons comic canon. It is traditional comic book type illustration in a science fiction style, which appeals to me. The colours of the cards are dark and somber:  greys, blues, and black predominate. The images are compelling, but contain none of the symbols that help orient a reader to a tarot reading. As such, the suits are noted and colour coded at the base of each card.

The cards don’t have titles; the minor arcana are designated by the appropriate symbol and a number; the major arcana by Roman numerals alone. Different symbols distinguish the suits: crowns for Kings and Queens, a horse head for Knights, and a helmet for the Pages. Although I liked this clean look to the cards (for the major arcana in particular), it makes reading more difficult. Since the artwork on the major arcana cards is unfamiliar, and the identifying words are missing, the reader may struggle to recall the cards of the major arcana and have to rely on the booklet, which offers sparse information.

The creation of new artwork for the deck would have made it more versatile for both Metabarons and Jodorowsky fans, and for tarot readers who enjoy comics and science fiction. If it retained the stories and images from the Metabarons stories, and perhaps incorporated more images and symbols familiar to traditional tarot, Metabarons fans might be able to see the addition of new artwork to develop the themes of the stories in a tarot context more thoroughly.

Jodorowsky is a uniquely occult filmmaker, not only because of his much loved films, El Topo (1970), Holy Mountain (1973), and Santa Sangre (1989), but also because he is a student and teacher of the occult with many published books and collaborations. He co-wrote a book about tarot, The Way of of Tarot, and has written multiple books on occult topics. It’s exciting that he created a tarot deck, but the execution doesn’t have the complexity that I anticipated. This observation is mainly due to the “recycled” artwork from the Metabarons comics. This may seem like a petty complaint given the richness of the Metabarons stories, but so much of tarot work is dependent on images and their resonance and interpretation.

Having said that, those who are very familiar with Metabarons might have a different experience with the deck. The guidebook gives a one-line thumbnail about each card, but they certainly aren’t intuitive or grounded in the symbols that traditional tarot readers might be familiar with. Although slim and brief, the text provides a surprising amount of context for the card’s imagery. This will help with readings or meditation, for people who like to visualize or journal based on card images. The short text regarding each card is descriptive. It doesn’t contextualize the card to the Metabarons mythos, but it does attempt to place the card in the traditional Rider-Waite-Smith tarot journey that readers might be familiar with from other tarot decks. Perhaps this was intentional, in order to provide some context describing the action portrayed in each card, while allowing the reader to bring their own interpretations as well.

I like the idea of re-imagining what a traditional tarot experience could be or changing up the imagery. However, The Meta-Barons Tarot doesn’t seem to do that. There’s insufficient context provided to those without a solid understanding of the Metabarons world.

The Meta-Barons Tarot is likely unsuitable for new tarot readers, unless aside from those steeped in Metabarons lore, who might find the imagery evocative of tarot. I think the deck would be very valued by a Metabarons collector, but might be of limited utility for tarot enthusiasts who aren’t already fans.