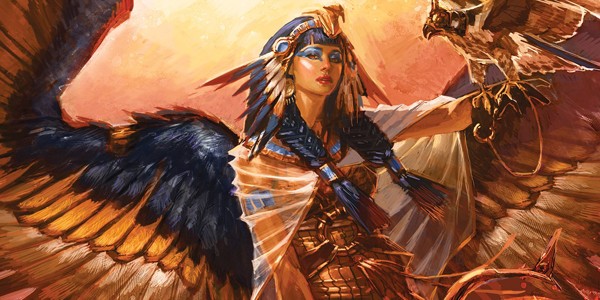 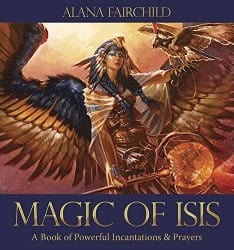 Alana Fairchild‘s Magic of Isis is a book of incantations and prayers peppered throughout with the gods of the Egyptian pantheon, and features Isis as the most invoked. It is a short text filled with colourful illustrations and, as a coffee table book, it works very well, but as a spiritual text, I found it lacking.

Quite honestly, reading this book made me uncomfortable. I went into this text with some reservations. The cover art, though gorgeous and well done, depicts a very anglicized version of the goddess, Isis.1 It also depicts her with many trappings that are not necessarily associated with her, particularly the falcon or hawk motif. Upon reading the book, my fears were realized.

A little background, I have always been drawn to the gods of Egypt and as my own spirituality developed, it just made sense that I would continue to seek guidance from them. I came into this reading already familiar with the subject, having studied other media and worked with them in my own practice.

Before we dive into the actual text, the art needs to be discussed. Half of the book is full colour artwork and although it is very beautiful and skillfully rendered, it depicts Isis with very European features and flies fast and loose with its use of iconography. It looks as if the artist just used Egyptian-style images, but had very little knowledge of what they meant. The text reads more like a series of affirmations with the Egyptian gods and goddess thrown in for colour. To be fair, the Egyptian pantheon is very complicated, with a lot of overlap between deities. Who married whom, who’s dead, who’s alive; it’s like a soap opera! But there are still connections that, throughout the ages, remain generally the same. This text does not preserve them or provide any solid connection to the source material.

These “prayers and incantations” do not, in any meaningful way, connect to the history of Isis or the other characters that appear in her stories. In fact, it seems to confuse them in many ways. For example, many prayers call upon Horus, such as this passage from “Incantation of the Eye of Horus:”

Eye of Horus, Eye of the Sun
Let my Divine Vision Fully come
I call upon your protection Divine
May my gifts awaken in service and shine2

Horus is very important to Isis because he’s her son or her brother, depending on the source material. Regardless of which you work from, she protects him so that he may eventually take his place as a leading deity. It seems strange that a book devoted to Isis would defer to her son or brother as a protective deity when, by all accounts, she was his protector. Isis is a protective guardian, and calling upon the strength of another god seems insulting. In her stories, Isis wasn’t always the nicest person, but she was independent. Calling on the power of other gods and goddesses for support, which this book does, is not characteristic of her.

Throughout the text she’s also depicted as having something to do with the moon when that’s actually her mother, and the sun, which would be her son or Ra. Magic of Isis maintains these strange interpretations of the connections between Isis and the other Egyptian deities. It is not once mentioned, or even alluded to, that her husband is Osiris. Instead it seems to imply that Horus is the one she is in a relationship with. The text also ignores the “darker” aspects of the goddess. She is primarily associated with funerary rituals, and although she can be invoked in a number of ways for a number of reasons — she’s also a protector of women — this books shies away from depicting her as anything but life and love. Even in its depiction of Osiris, the literally undead god of the underworld, it portrays him as this sort of all forgiving figure.

That is one of the text’s major failings — its push to depict the Egyptian deities as some sort of all-forgiving, gracious beings. What makes these gods so compelling is not their power and their ability to bestow favour, but how easy they are to relate to. This text attempts to position the gods as higher than you for being, for lack of a better term, morally superior, when, just like us, the get angry and respond in rash and petty ways. These are gods who understand your human failings. This book, for me, fails to bring any real understanding of  who these deities are and instead uses them as colourful props. The prayers included in this text could easily be used without the connection to the Egyptian pantheon that it claims to invoke. In fact, for many of them, you could swap out a few words and use them for a variety of other gods.

I would not recommend this book to anyone looking for a spiritual guide or a source of affirmation. It lacks both connection to and understanding of the ancient Egyptian deities and their culture. If you’re looking for a serious understanding of working with these gods and goddesses, The Ancient Egyptian Prayerbook, by Tamara L. Siuda is a good read, but, more than that, engaging in study around their various histories would serve an interested party well. Overall, Magic of Isis reads more like an exploitation of ancient beliefs rather than an effort to bring them to a modern audience.