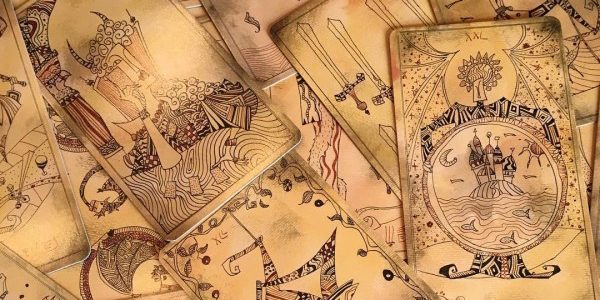 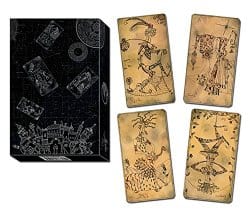 The Lost Code of Tarot Kit is an interesting and unusual package by Andrea Aste. It is comprised of a 5½” x 8” booklet printed in colour on high-gloss paper, and a deck of cards printed on quality stock. Rather than a guidebook for the cards, this booklet is a novella telling the fictional story of their discovery and meaning. Both come in a sturdy presentation box with a magnetized fastener. This is not a tarot deck in any traditional sense.

The Book of Shadows: The Lost Code of the Tarot describes itself as

… a multimedia (non)reality experience; an adventure in a land of dangers, mysteries and untold truths, where alchemy, magic and science are intertwined in secret ciphers and cunning plots, all on a background of ancient struggles between occult powers. The project recreates a visionary parallel world revolving around a mysterious manuscript and a deck of Tarot cards, obscure works of a fictional Alchemist.1

The booklet begins with the story of Dr. Abbot — a fictitious archaeologist — and his discovery of an ancient book and its companion tarot cards. The story goes on to account his research into these items, their history and the decoding of the tarot. The tarot accompanying the book is meant to be a replica of the set discovered by Dr. Abbot. The book explores the rich history of a parallel world, its philosophy and mythology. The stories woven around the discovered tarot deck evoke an air of secrecy and magick. As for the cracking of the lost code, this is intended to reveal the original meaning of the tarot. Aste’s stories are steeped in the tradition of alchemy, but not the tradition of the tarot. In fact, the whole tale begins with an alchemist who creates a mysterious manuscript and a deck of tarot containing secret symbols and codes. The alchemical tradition is symbolized through the use of black and red inks in the manuscript and the tarot. The black ink is said to represent the unknown, the darkness and evil as ignorance, while the red represents the power of the human intellect.2

Aste developed this project through Kickstarter.3 While it is an innovative idea, I find it somewhat lacking. If you are a collector of tarot, this is definitely something you may want to add to your collection, but I would not recommend it as a tarot deck for divination. The cards are bland and difficult to read because of their sketch-like quality. The minor arcana depicts only the number and suit, there are no additional details or imagery. Disappointingly, although the booklet offers some suggested readings, it gives little information about the cards other than their history. The “decoding” of each card is very simplified. For example, the hieroglyphic-type symbols depicted on the Fool card translate as man, loss and rationality; on the Chariot: winner, human being and the world. These seem to have little relation to traditional tarot meanings. There are also 15 “symbols of divination” that are used to position the cards in a reading. These seem to have little purpose other than to bolster the story. The booklet claims to “decode” the cards but it merely translates some of the obscure symbols on the cards into words, which translate back into Aste’s fictional history of the making of the card itself, rather than interpreting its meaning.

With The Lost Code of Tarot Kit Aste has created a fascinating parallel world with its own characters and history. He could have developed the tarot in much more detail as a means of divination, rather than a prop to his story. There is a forthcoming mockumentary which claims it will further crack the lost code; perhaps that will make the cards more informative.