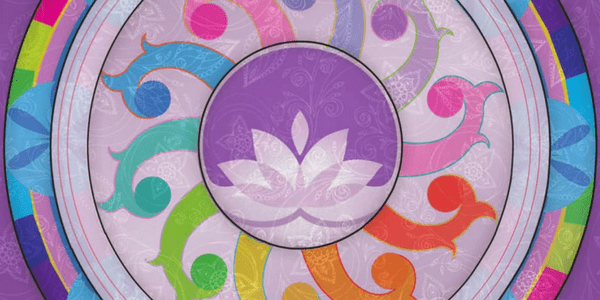 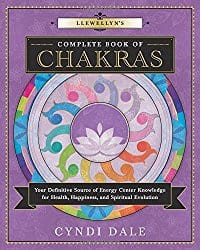 When you’re part of the occult community, chakras are one of those things that you’re going to hear about, no matter what path you follow. People throw around the idea of chakra blocks, cleansing, and energy constantly, so when I picked up Llewellyn’s Complete Book of Chakras by Cyndi Dale I was really hoping to learn more about this practice and boy, it does not disappoint. This is a massive and comprehensive education on chakras and it will tell you almost everything you wanted to know about chakra energy.

This book is huge. It’s just over 1,000 pages in length with each page densely covered in information, broken up here and there by black and white line illustrations. The centre of the book holds a few pages of full colour illustrations. The book is separated into nine parts that encompass the history, use, and meaning of chakras, and their relationship to many different cultures. There are also practical exercises throughout for cleansing, healing, and working with chakras.

Although there are many different chakras they can all be described as invisible points of energy in our bodies. These energies have effects on both mental and physical health. This book lays out, in plain language, how to work with them.

Dale has a very friendly and approachable writing style, which is good, because there is a ton of information in this book. Throughout the text, she uses examples from her work with clients to illustrate the concepts, which provides a nice break from all the facts that this book is just jam packed with.

The book opens by giving you a brief overview of the concept of chakras and how they can be used in practice. This section of the book is based entirely on the Hindu tradition of chakra use, which is where the concept originated. It starts with an overview that includes some basic information about what charkras are, where they are located in the body, and how their location affects energy, all in brief.

As the chapters progress the things covered in in the first chapters are explained more in depth and expanded on, like a lotus blossoming, until the reader has a full picture of each of the chakras and their uses in chakra-based practices.

I really like this approach to teaching because it allows the reader to gain some familiarity with the subject so that they can more easily relate the information and remember it when the text returns to expand upon it. The way this text is set up really facilitates learning in order to best use chakras.

Once the book wraps up its education on the Hindu origins of chakras, it starts a new section on the expanded history of chakras and how they appear in other cultures. The book designates a section to each major location, which includes Africa and Europe, for example, which are then broken down further by cultural traditions.

I would have liked to have seen more in these sections, as they were presented more as overviews than the in-depth practice information that was contained on the Hindu system. Although the information for other cultures was well written and even included some exercises, they were comparatively short. I feel that these sections could have been expanded on in order to show that this practice extends far outside of Hindu beliefs.

The book ends with a look into the future of chakras and some miscellaneous information that didn’t quite fit into the previous sections. These include how chakras appear in the natural world as well as new systems of chakras. This section was very interesting, but it too was short and I would have liked to read more here as well.

Llewellyn’s Complete Book of Chakras is a great book for people who are interested in learning more about chakras with the intention of actually working with them in their practice. It provides a ton of information and although it probably isn’t be the only book that someone would need to fully embrace chakra work, it’s an excellent start.

For someone who is just generally curious, this tome is likely far too if you’re looking to learn just a bit about the tradition. As I said, this book is huge — which is daunting if you’re just trying to understand chakra energy better and not necessarily looking to become a master in it.

I will use the information to better understand some texts and practices I have come across in my own practice. I do want to learn more about how chakras are used in African-based religions, a concept that I learned about from this book; however, I won’t use a lot of what is contained in this book as it does not align with my own practice.

I would, however, wholly recommend this book to someone who wants to expand their knowledge of chakras with the intent to work with them in their practice. It is very well written, contains ample information and is approachable, even for someone coming to it with little to no knowledge.

Overall, Llewellyn’s Complete Book of Chakras could be a great resource for people who want to work heavily with chakras. It’s well written, easy to read, and provides a full education in chakras and their use. If you just want to have a better idea of what chakras are in general, you might want to give this book a pass in favour of a lighter tome.