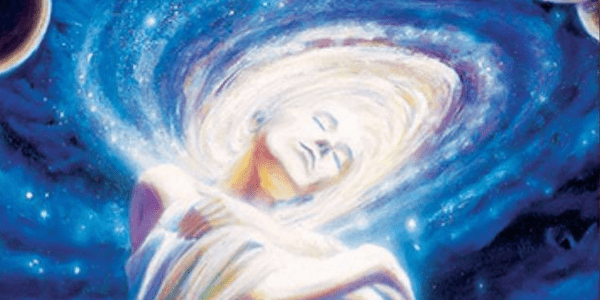 Lightworker Oracle: Guidance & Empowerment for Those Who Love the Light

I was looking forward to receiving the Lightworker Oracle

because I have enjoyed working with Alana Fairchild’s other decks, such as the Kuan Yin Oracle

. The box art, which depicts a woman gently hugging herself as the cosmos swirls around her head, has a feeling of astral alchemy to it. This sense of a cosmic connection left me curious to see the content of the deck. However, when I opened the box and began working with the deck, I was a bit dismayed. The colourful imagery conveys a sense of universal transcendence and divine connection, but there is a sense of disconnection that makes it hard to relate to this deck.

Related: Five tarot and oracle decks reviewed and ranked from 2016 by Spiral Nature

There are 44 cards total in the deck, and each features a number and the title of the card at the bottom. The guidebook features three sections for each card: the title and image of the card, a description of the card’s meaning, and an invocation to assist the reader in calling the card’s energy. The titles of the cards are abstract and almost prompt you to reference the guidebook, because their meanings are not readily accessible. Once someone has studied the symbols and figures in the cards, the imagery may be more helpful in intuiting the meaning. However, I did not find these cards accessible intuitively, because they assume the reader already has some knowledge of certain spiritual concepts.

Right off the bat I noticed a lack of diversity, as the Lightworker Oracle features only white people. The deck has a very prominent Christian overtone, shown in the use of angel imagery and multiple references to Christ Consciousness. This is where the confusion comes in: The card descriptions in the guidebook reference a wide range of spiritual teachers, ranging from the Buddha to Serapis Bey to the Divine Feminine, but imposes the tone and values of Christianity onto them. These other paths and beliefs did not seem honoured in their own right; it’s as though the deck is saying through its imagery that Lightworkers are white and Christian, but it’s alright for them to appropriate the traditions of any belief system without regard for the context from which they come.

There is also a mismatch between the cards and the guidebook, which seems to be written for an audience that is new to the concept of Lightwork. The beginning of the guidebook states that Lightworkers often feel left out of society and different than the people around them, yet still want to make a positive contribution to Earth. Going into rather superficial detail about what it means to do Lightwork and begin to heal yourself and the world, the author’s meditation CDs are offered to help people move through this awakening. The entire introduction is centred in the “Love and Light” concept of spiritual healing that tends to stem from a place of moral superiority and deny shadow aspects.

Despite the very basic introduction into Lightwork, the cards themselves are filled with elaborate descriptions that most readers would not know off the top of their heads, especially if they are new to the path, as the guidebook seems to assume. For example, card 28 depicts Master Hilarion and Archangel Michael. Without knowledge of these spiritual teachers, it would be hard to interpret and read this card, leaving the reader dependent on the guidebook for interpretation. This makes it hard to understand if this deck is for beginning Lightworkers, or those well-versed in the vocabulary of spiritual healing such as chakras, new consciousness, star children, and alchemical mutation.

The first card in the Lightworker Oracle is called First Ray of Power, which is a concept that you would only understand if you’ve studied esoteric philosophies in depth, yet here it is, presented in six paragraphs to help the reader connect with Ascended Master El Morya. There is wisdom in learning about the Rays of Power and the Ascended Masters, but the guidebook gives absolutely no understanding for who these spiritual teachers are, or the context needed to understand their knowledge. I suppose the deck could be used as a prompt to for further study, but the vague way such potentially profound wisdom is presented is a bit of a turn-off.

Card 43 is the Sixth Ray of Devotion and prompts in the invocation “I invite the genuine, unconditionally loving masters and archangels, including Uriel, Christ, Mary Magdalene and Mother Mary, to assist me and all beings on this earth in integrating the blessings of the Sixth Ray of Devotion.” This passage denotes the smorgasbord of Divinities being called upon through the deck and highlights the Christian slant of the Lightworker energy meant to be channeled through the deck.

Overall, my clients did not seem to like the Lightworker Oracle

. The querents I read these cards for were polite, but it seemed they weren’t connecting with the messages as readily as they usually do when I read with Alana Fairchild’s other decks.  I tried reading the description from the guidebook to them, and they mentioned the language did not feel right for them — as I noted, it requires a very specific knowledge and imposes a Christian tone. The messages from the Lightworker Oracle seem best for one’s personal journey of enlightenment, and the cards seem better used as a focal point for meditation or placed on an altar than as a reading deck.