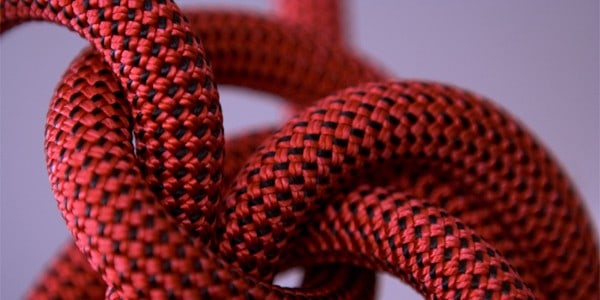 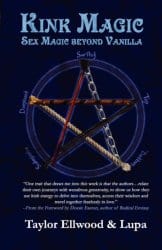 Kink Magic: Sex Magic Beyond Vanilla is an excellent book for those interested in mixing magick and kink in a sex-positive way. Heavily influenced by a “whatever works” chaos magick approach, the book lays a great foundation for exploring different techniques, ideas, dynamics, and practices in kinky magick.

This is a great guidebook for beginners to BDSM, kink, sex magick, or even magick more generally. Three chapters “The Principles of Kink,” “The Basics of Magic,” and “Sex and Sex Magic” outline some of the core ideas and concepts one might need to get started, with references to plenty of other reading material for developing one’s techniques. Tools for working magick and getting kinky , dealing with the bound to happen “oops” that  so often come up, and also, negotiating poly-workings — whether polyamorous or “polyfuckerous” — are also given dedicated chapters. Including these topics allows for beginners — or even those who need a refresher — to feel informed, comfortable, and given some time to think things through. Lupa and Taylor Ellwood’s playful, practical, and realistic tone and approach to the topic make things even easier, and their care in crafting this book shows.

In many cases, much of the sexual side of Paganism has been tamed. As Ellwood and Lupa note, what was once “The Great Rite,” is now the symbolic gesture of the union of the athame and the chalice.1 Looking to the complicated “white-washing” of Wicca and Paganism amidst the satanic panic of the 1980s and 1990s, we can see a tangled situation; some Pagans might be out for social acceptance, but many others also call for safety in their communities, and an exploration of the power dynamics involved in sexual practices, magick, and group work. Through personal narratives, excellent research, humour, and thoughtful commentary, Ellwood and Lupa present a framework for thinking through kink and magick in an ethical, sex-positive, and in many respects, anti-oppressive way.

The topics of non-normative sexualities, genders, and relationships, as well as binary oppositions in sex magick, are all topics breached in this book, and the authors even go as far to say that magick would benefit from doing away with polarities in workings.2 For Lupa and Ellwood, this is a way of undoing the harm that the binary inflicts on people whose experiences and identities don’t fit so neatly into these categories. I agree with them, but I don’t think that polarities should necessarily be avoided, but instead, used in complex, thoughtful, and anti-oppressive ways. The authors do gesture towards this, noting that the ideas of men as active or dominant, and women as passive or submissive — in sex magick, D/S dynamics, and culture at large — are socially constructed ideas.3 This doesn’t mean that these symbolic notions can’t be used for ethical and anti-oppressive magick, sex, or kink.

One of the most interesting (and amusing) parts of the book was the topic of just how cohesively magick and kinky practices overlap. The similarities are endless, and that’s why they seem to mix so well together. Both kink and magick involve working with tools. For example, there are wands (Hitachi Magic Wand or Double Wand of Outer Power… your choice!), rope (around your waist as a sign of the bondage of mortality, or perhaps something a little more… restraining?), and candles (dripping wax isn’t always a bad thing) used in both kinky sex, and magick. Pervertables — mundane things that can be transformed into something useful in a kinky setting — become magical in the eyes of the authors.

There is also a big overlap between magick and kink as a form of self-transformation. BDSM is often seen as therapeutic, transforming, and having effects on one’s behaviour and identity in the real world, and discipline is not just something the working magician or witch might need to send their life in the right direction. And, just like magick, working together to do effective ritual is, as the authors deeply explore, a matter of building strong connections. Taking risks — whether magically or intimately — requires trust, consent, willingness, and an awareness of the dangers at hand. Whether working alone, with dedicated partner(s), or forming groups to work kinky magick with requires assessing the dynamics of the people involved and the tasks at hand.

Kink Magic: Sex Magic Beyond Vanilla is a great introduction to the way to mix magick and kinky sex, and presents a perspective on the topic that is the right mix of serious and light-hearted.