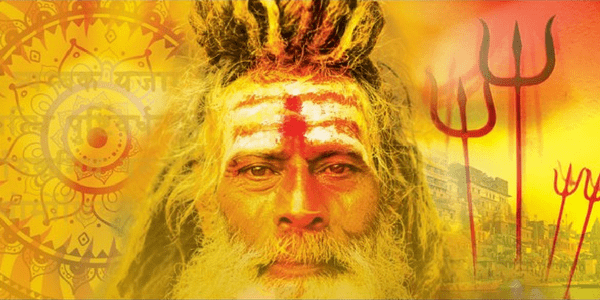 Journeys in the Kali Yuga: A Pilgrimage from Esoteric India to Pagan Europe

, is a captivating and insightful memoir of a journey through initiation into the Naga Babas, Hindi Sadhu dedicated to a life of spiritual discipline and renunciation of worldly possessions, which ultimately leads him back to the roots of his homeland in a spiritual quest of fulfillment. His story offers a rare glimpse into eastern esotericism, which few westerns have the opportunity to peer into from the outside. Cederberg’s unique position as a westerner initiated into such a time-honoured Indian lineage as the Naga Babas gives him a fascinating perspective, as he juxtaposes and ultimately integrates the two vastly different yet intermingled spiritual heritages of eastern and western esotericism.

Told in traditional hero’s story fashion, Journeys in the Kali Yuga begins with Cederberg’s pilgrimage to India, a world he paints as vividly coloured, filled with a mixture of foreign smells, sounds, and tastes that threaten to overwhelm the senses. Vacillating between divine terror and awe, Cederberg brilliantly captures the spirit of the land that drew him into the wild world of the Naga Babas (literally translated as “Naked Yogis”), who are the mystic madmen of the God Shiva. Despite their unconventional lifestyle, they wield immense power in Indian culture because of the wisdom and knowledge their ancient lineage holds. To join the sect, one must first seek a Guru. In Cederberg’s story, this Guru is Rampuri, who decides he is eligible to join and bestows him with a new name and mantra, which he can grow into on his spiritual path.

Through the journey, Cederberg highlights the sense of feeling like a stranger both abroad and at home as he tries to find his footing in two vastly different worlds — the vivacious, dynamic flow of India that does not necessarily welcome him as a foreigner, and traditions of his homeland that has left him with a feeling of disconnection to more magical aspects of life. He does his best to observe without judgement, believing that:

The only way to really learn and understand anything at all of this was to engage and absorb, which in practice meant to sit, watch and participate, not to make moral, intellectual, or analytical judgments or ask what this or that meant or symbolized, as if all things had implicit and deeper meaning or symbolic value outside of those directly apparent to them — but to simply sit and watch how things unfolded. And that is what I tried to do. I did not make judgments about anything one way or the other but simply let the experience wash over me to see what knowledge would grow from it.1

The peak of the journey occurs at Kumbh Mela, a massive pilgrimage where people of Hindi faith come to bathe in the Ganges River, which they hold sacred. Cederberg’s account of the Naga Babas, smoking chillums and stoned out of their minds the entire time, is a once-in-a-lifetime account of seeing the divine in the bizarre reality of life, where the sacred and profane are one. Reading Cederberg’s account of the Naga Babas makes you feel like you are sitting with him witnessing this experience, which is a real treasure as it is something off-limits to the uninitiated. Cederberg has an uncanny knack for conveying the momentum and intensity of the energy as it ebbs and flows, from navigating through streaming crowds surrounding the river, to relishing moments of silence amongst some of the holiest men in India, the Kumbh Mela and spirit of the Naga Babas is brought to life through his writing.

Cederberg’s journey in the second half of Journeys in the Kali Yuga is centred on his return home and crisis of faith. Seeing the discrepancies of spiritual and magical traditions between the east and west left Cederberg feeling disillusioned. He writes, “Again, this brings up a central problem we face in the West. For the most part, we lack our own gurus — that is, teachers and guides with voices of authority and power reflecting an ancient, unbroken tradition. Our traditions have been severed, and the access we too seldom gain to them is through highly suspicious entities, whether modern ones or those claiming ancient lineages.”2 As he struggles to reconcile the traditions of the west with the wisdom he has gained from eastern esoteric traditions, Cederberg plunges into a dark night of the soul that ultimately reunites him with spirits of his homeland through Norse mythology.

Following his period of reflection, Cederberg does visit India once again, years later and this time accompanied by his partner. He sees India from a new point of a view, with a familiarity of a kindred spirit, yet seeking something different this time. The ancient practice of Tantra and Kalaripayat, an ancient form of Indian martial arts, are brought in to understand India’s complex magical history. The Hindu Goddess Kali is prominent in this section, as she is “the destroyer of illusions, especially illusions we might have about ourselves and our own finite nature. And she is time, all-producing, all-consuming, as everything that is created in time will inevitably be consumed by time as well. Approaching this paradox, turning to Mother Kali means embracing both of the intertwined forces of the universe of which all life and death consists: the creative and the destructive”3

Cederberg spends a lot of time discussing the Kali Yuga, which is the last of the four ages in Indian cosmology, characterized by “the loss of spiritual life and tradition and the valuing of everything through materialism and money4. It is a time when society has strayed so far from natural law that they have fallen into destructive behaviour characterized by conflict, strife and degradation of traditions. False prophets reign and our souls are separated from our roots. While adept in technology and pious because of scientific advances, humanity remains floundering and aimless with a sense of emptiness stemming from the disconnection between ourselves an the nature of the world. Cederberg draws a parallel between the age of the Kali Yuga with the Nordic mythology of Ragnarok, in which the trickster god Loki causes the death of Balder, the sun god. The themes characterizing the cataclysmic time of the Kali Yuga, such as war, corruption and ecological disaster, are what we are seeing at the forefront of our modern society, and Cederberg’s journey highlights the importance of awareness during this challenging time.

The most remarkable part of this is the way that Cederberg is able to use his keen sense of self-awareness to yield insights into spirituality in the modern age that truly highlight the current state of the collective. He quotes, “The so-called spirituality of the West today is, rather than an antidote for the Kali Yuga, a symptom of it. The dominant Western religions in their current form are void of vitality and élan — they can no longer sustain and nurture the spirit, if they indeed ever did.”5 The wisdom he has gleaned from his experience is imparted with tender discernment that gives readers a sliver of his testimonial as an offering to the revival of divine within us, within the roots of our own lands. Returning back to his roots after a sojourn of mind, body, and soul through a culture so unlike his own, Cederberg concludes “What is needed is not another arbitrary ideology, but a rekindling of holy fires, a reconnection with the wisdom of the sacred soil and soul we are a part of.”6

Reading about Indian esoteric traditions in Journeys in the Kali Yuga gave me a new reference point for understanding western occult and spiritual traditions. I think it is easy for us to become so immersed in the study of our own traditions that we forget the larger context in which they exist. Cederberg’s narrative was absolutely jam packed with information about a variety of gods and goddesses in both Indian and western pantheons. It was well-researched, demonstrating his intricate and thorough knowledge of eastern and western esotericism, with the added dimension that can only come through first-hand experience. His portrayal of India had me daydreaming about the places he spoke of, his rich imagery truly provides the reader an access point to a culture filled with mystery and wonder.

Truly, I can say Journeys in the Kali Yuga is one of the best books I have read this year. I recommend to any reader who is looking for a tale of self-exploration, with all the epic ups and downs of that journey. Cederberg’s journey from home into a new land, filled with trials and tribulations, comes full circle as he returns home with insights to carry his own culture forward.