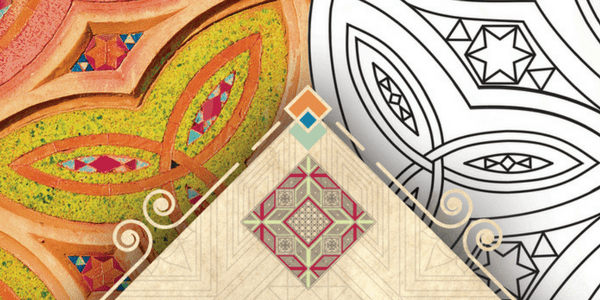 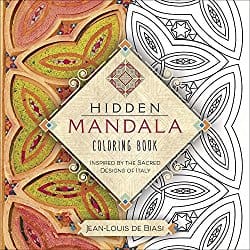 Since visiting Italy on a knitting cruise in 2009, during which I toured several major cities including Florence and Venice, I’ve developed a strong affinity for all things Italian. As we were riding home from dinner recently, a friend who knows of my trip and dreams of going to Italy herself, asked me which city, Florence or Venice, I liked best. I stumbled about, thinking out loud, trying to come up with an answer. I could not, because they are so magnificent in different ways, yet each steeped in art and history and craftsmanship (as can be said of the entire country). So, when I saw the Hidden Mandala Coloring Book offered for review, I snatched it up, curious to see mandalas based on Italian design.

Author Jean-Louis de Biasi was inspired to base the 60+ drawings in this book on photographs he and his wife took on their own travels through the Mediterranean.

Italy is one of the famous countries in which you can still see mosaics dating from the Roman civilization…During our latest travels in Italy, while exploring ancient Roman villas and churches, it became obvious to me that we were looking at real mandalas, but they were Western mandalas!1

In the introduction, de Biasi explains the origin of mandalas, and discusses the use of sacred geometry and numbers and the colour symbolism in them. While knowledge of these things can be fascinating, he writes, “…today I am offering you a coloring book and not a treatise on symbolism… This is why I again emphasize not thinking about symbols, geometric shapes, and numbers. Don’t let your mind become an obstacle to your inner experience.”2

That is a wise call, because the mandalas he presents are truly beautiful and easy to get lost in for their own sake. They contain columns, flowers, waves, solar and zodiacal elements, and images of Roman gods and goddesses. Some are evocative of classical mosaics, others look like elements found in ancient frescoes. Some are simple in composition, just a few circles or swirls (looking just like what you’d draw with a modern Spirograph), and some are quite intricate. There’s something here for every skill level.

I was relieved to see that the mandalas are printed on one side only, on thick paper. I coloured one with Sharpie markers, which are my preference, and was pleased to see that there is almost no bleed-through to the other side, except for a very dark grey I used to simulate grout. The pages are perforated, so bleed-through won’t be an issue if you remove the pages. If you choose to keep them in the book and use markers, put a thick piece of paper behind your mandala just to be safe.

One small disappointment is that de Biasi mentions readers can see some of the photos of the mandalas and their original colours on his website3. I looked forward to seeing the originals and where they were from, but when I checked there were no pictures — nor is there a reference page for background on the mandalas in the colouring book itself, as I’ve seen in similar books. This information isn’t critical to the book’s purpose, but for armchair travellers and curious Italophiles, it would have been welcome.

The Hidden Mandala Coloring Book will inject a bit of classical elegance and spiritual art into your colouring book collection. You can enjoy the act of creation, analyze the symbolism later, and perhaps, frame a few and hang them on your wall to meditate upon. They may remind you of the art and ancient culture of Italy if you’ve been — or inspire colourful dreams of a future holiday if you haven’t.