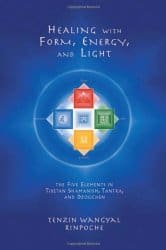 Bön is the indigenous Tibetan religion that predates Buddhism, often called Tibetan Shamanism. As a religious belief it had historically suffered a social oppression under the Lama culture of Buddhist Tibet, but His Holiness, the Fourteenth Dalai Lama has recognized Bön as one of the five major spiritual traditions in Tibet, which has led to a resurgence of information and interest in this traditions. Tenzin Wangyal is a Bön-po (practitioner), considered a Bön master and has spent his life studying Vajrayana and Bön. Due to this upbringing (and perhaps the modern state of the religion), the Bön in this book is heavily influenced by Tibetan Buddhism, as opposed to being “pure” Bön, which may not have existed for centuries and as a religion that mythologically dates its origin 17,000 years ago, one must expect some drift in beliefs and practices.

Tenzin Wangyal wrote this book, not only to introduce the concepts of Bön to the Western world, but as an attempt to heal those in need for, “The societies of the West have created wonderful technologies, arts, and sciences, but living in a dead world, relying on entertainment for fleeting satisfaction,”1 as well as a physical imbalance and suffering is generated from the state of the society, and he feels that a reconnection to the elements along the paths of Bön, tantra, and Dzogchen will heal this state.

As the title suggests, much of the book deals with the five lights, primordial representations of the elements in their most subtle form, and with how they appear in Bön, tantra, and Dzogchen. The three systems represent different “levels” of practice and knowledge, with Bön being the “simplest” and external, tantra being more complex and internal, and Dzogchen being known as “the great perfection” and being “secret” or subtle. Yet even with the three levels of practice, Tenzin Wangyal stresses throughout the boo,k “The highest practice is the one that is most effective, not necessarily the one categorized as ‘higher,'”2 and that the divisions are really more conceptual rather than literal and practical.

The book leads the reader through an introduction to the five elements (earth, water, fire, air, space), which while good, I felt could have been more expanded. Then moving into the subtle body and the placement of the elements therein, how to relate to non-physical entities and different types of energy in the body. Throughout all of this is a variety of exercises ranging from the simple Nine Purification Breaths, to working with non-physical entities, spirits and goddesses of the elements, doing a retrieval of elemental energies (considered a “simpler” form of soul retrieval), to a variety of techniques to incorporate and move the elements in the body, to perfect the mind and body.

Throughout the entire book, I appreciated Tenzin Wangyal’s perspective on the role of knowledge in relationship to the effectiveness of the practitioner. “Whether or not meditation and spiritual practices are powerful depends on the practitioner more than the form of the practice. There is little benefit if they are done without a correct understanding of how to practice and what the practice is supposed to accomplish.”3 “Although it is easy to simply explain how to do the physical movements, it is more helpful to explain why so that the understanding can be applied to other practices.”4 As well as his emphasis on personal experience and understanding, relating the symbols of the elements to a dream and saying “the individual who has the dream is in the best position to know what the meaning is.”5 His focus on personal experience is part of his work, for he admits in the introduction that some of the book has come from his dreams and prayers to the goddesses, later confirmed by lamas or ancient texts.

For anyone interested in Bön, this is a great starting place, and if you have an interest in Tibetan Buddhism, this book will help illuminate some of the early influences on Vajrayana. The book is written in a style that is very accessible, in exercises, language and analogies. A fascinating look into a system that is  just resurfacing.