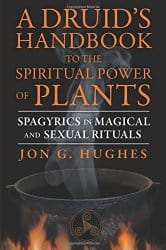 In the introduction, author Jon G. Hughes writes that he “began with the intention of comparing the plant-based preparations, rituals, and magic of the Welsh Druidic tradition with those of the broader and infinitely more documented spiritual traditions practiced all over the world.” However, he continues, writing that he “came in contact with the works of ancient and modern alchemists,” and his “fascination was spurred by the alchemical search for immortality and the involvement with sexual ritual, as both have their place in the Druidic tradition.”1

In the first section, Hughes goes into detail about the history of Druidic practices and alchemy. He explains that each practice was created and spread in separate parts of the world, yet they are similar when broken down to their individual workings. He lists the names and histories of several prominent alchemists, including Thoth in Egypt, Aristotle and Hermes (also known as Hermes Trismegistus) in Greece, and Paracelsus from Switzerland, just to name a few. Through the information he provides, one would be able to further their research in alchemy with this plethora of information.

The following section looks at the spiritual power of plants, and the specific parts required by the priest or priestess to prepare various complexes and incenses. Hughes is very detailed in his explanations, which makes it much easier for the novice to understand. He provides a flower correspondence chart,2 and a tree correspondence chart,3 for an easy way to determine which plants are most suitable for the type of ritual one is preparing for. He also walks the reader through the various steps of the harvesting ritual, as well as the different preparations necessary for each type of cardinal (essence) processed.

Hughes then details the necessary equipment used to prepare the cardinals, and the outlines ritual steps taken during the preparations. It is a very informative and complete step-by-step process for the separation, purification, and reunification of the materials. He notes the need for cleanliness in the work space, as well as for the sterilization of tools.

Hughes explains the sex magick rituals that the plant materials are used in. His instructions, while detailed and graphic, are provided in a purely matter of fact way — it gets a bit clinical here. He uses the example of a heterosexual ritual format, but he does acknowledge other sexual orientations and the various combinations one can use for their own sex magick. He emphasizes the necessity of having an even number of participants no matter what their gender in order to keep a balance of the proper energies. His instructions for performing these rituals are detailed to the point that a true beginner could prepare the complexes, set up and cast a circle, and perform their own ritual without necessarily using any other text.

This book is geared for novice Druids who knows little about plant lore, the Druidic traditions, and how to perform rituals, and in that respect, the details and instructions work well. The Druidic philosophies and spiritual connections are also thoroughly explained and are included in the example rituals. The comparisons to alchemy are helpful, in the sense that it brings a bit of science into the fold, such as explanations of why certain complexes are created in such a way, in addition to the spiritual infusions from the Druidic plant lore.

For those more versed in any paths concerning Druidry, alchemy, sex magick, and plant magick, the book will come across as repetitive. Even to the point that some passages are written exactly the same as previous passages with only a few words changed. For example, the discussions about creating the cardinals from flowers is repeated again for trees.

Overall, this book is well written, easy to understand, and well worth a read, especially for those who are just starting out on a path that includes the Druidic practices and philosophies.