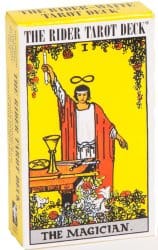 For some reason Smith’s contributions to today’s most popular tarot deck often get overlooked in favour of Arthur Edward Waite, who commissioned the deck and wrote the accompanying book, The Pictorial Key to the Tarot. Despite the disparaging comments Waite made about Smith in his letters, she did her own research, and found source images that Waite would not have been familiar with.

By the time Smith began working on the images in 1909, she was already involved with the Golden Dawn (she joined in 1901), was widely read, familiar with music and theatre (she painted sets, among other things), was active in the Catholic church, and was, as Waite described her, an “abnormally psychic artist.”

In addition to her paintings and set design, she illustrated a number of children’s books, broad sheets, wrote and illustrated Jamaican fairy tales, and numerous others.

The Smith family moved frequently due to her father’s job, and she lived in London, Kingston and New York City. While her family called her Pam, she was known to her friends as “Pixie” Smith.

A handful of biographies have popped up in recent years, but my first in-depth introduction to Pamela Colman Smith’s history and her work was through Stuart R. Kaplan’s The Encyclopedia of Tarot, Volume 3. (If you’re interested in tarot history, I highly recommend the richly illustrated four volume set.)

Who else gets overlooked that we should be talking more about?